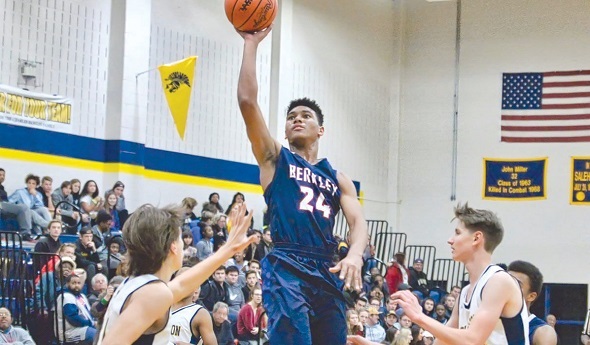 We’re heading into the midpoint of this boys basketball season, and the surprises keep coming.

Detroit Henry Ford and Grand Ledge were full of them last week, and Berkley has been one of the state’s most intriguing all season. We touch on those a little bit below, along with a number of others that most recently caught our attention.

1. Detroit Henry Ford 63, Detroit Cass Tech 60 – The Trojans should be back in the Class B title talk after handing a first loss to one of the major favorites in Class A.

2. Grand Ledge 59, East Lansing 53 – The Comets are 6-1 but weren’t getting much attention until this upset broke East Lansing’s 45-game regular-season winning streak.

3. Frankfort 69, Buckley 53 – The Panthers handed the reigning Class D runner-up this defeat after falling to Buckley by 39 and then only three last season.

4. Detroit Cass Tech 85, Muskegon 78 (OT) – The Technicians did not waste time bouncing back from the Henry Ford loss, downing Muskegon in overtime the next day at Grand Rapids Ottawa Hills.

5. Macomb Dakota 64, Clinton Township Chippewa Valley 62 – The Cougars took big losses early to Detroit U-D Jesuit and New Haven, but are undefeated in the Macomb Area Conference Red after handing Chippewa Valley its first defeat in the league and overall this winter.

Ann Arbor Skyline (7-0) – The Eagles have been building toward a start like this, even winning the Southeastern Conference Red title a year ago. They started the new year with a 20-point win over second-place Ann Arbor Pioneer on Saturday and have impressive wins by 14 over Belleville, one over Detroit Pershing and 20 over frequent nemesis Ann Arbor Huron.

Berkley (8-0) – The Bears have doubled their win total from last season after going 4-17, and they’re only a few more from guaranteeing a first winning season since 2010-11. They’ve pulled off a few close ones including a two-point victory over MAC Bronze leader Madison Heights Madison a month ago. Next up is Rochester with first place in the Oakland Activities Association Blue on the line.

Detroit Henry Ford (7-2) – The 2015-16 Class B champion still made the Regional last season despite finishing 13-11 overall, and another big run could be on the way. Ford opened this season with a two-point win over 2017 Class A semifinalist West Bloomfield, and has beaten a series of Class A teams including Cass Tech (see above). The losses came to Class A powers Grand Rapids Ottawa Hills and Hazel Park, the latter in overtime.

Ovid-Elsie (5-1) – The Marauders have hovered around .500 the last few seasons, but might have something more in store over the next two months after a fast start. Ovid-Elsie sits atop the Tri-Valley Conference West standings and hasn’t lost since its opener (to still-undefeated Fowler). Coming up Friday is a matchup with second-place Hemlock.

Norway (5-2) – The Knights moved over to the Skyline Central Conference after sharing the Mid-Peninsula Conference title last season and finishing 18-3 overall. They’ve won four straight and hold a half-game lead in the SCC’s Large School division. The two losses came in December in overtime to Powers North Central and by eight to nemesis Iron Mountain, which knocked Norway out of the tournament last season. Those two will face off again Feb. 9.

Sanford Meridian (7-1) – The Mustangs are playing for a second straight Jack Pine Conference championship and already have wins against usual annual contenders Beaverton and Clare. Meridian’s only loss was by 10 in early December to Class A Saginaw Heritage, and it’s got another similar test coming up against Midland Dow in two weeks.

Cedarville (7-2) – The Trojans are approaching the season’s midpoint in position to take back the Eastern Upper Peninsula Athletic Conference title after tying for second a year ago. Cedarville got past reigning champion Pickford 67-59 last week and has lost only to undefeated Hillman and Class B Boyne City.

Frankfort (6-0) – The Northwest Conference sent Buckley all the way to the Class D title game last year, and early this winter it’s Frankfort that could be setting up for a run. The Panthers held onto first place all alone in the league last week with a win over the Bears, and now face the other two teams with only one conference loss – Kingsley on Tuesday and Maple City Glen Lake on Thursday.

Tuesday – Orchard Lake St. Mary’s (7-2) at Warren DeLaSalle (6-2) – In a strong Detroit Catholic League Central, these are two of the best; DeLaSalle leads and St. Mary’s is third after falling to second-place U-D Jesuit by a point last week.

Thursday – Bellevue (8-0) at Camden-Frontier (8-2) – Both are pushing for Southern Central Athletic Association titles; Bellevue is tied for first in the West and Camden-Frontier is second in the East, and this game counts in the standings for both.

Thursday – Maple City Glen Lake (5-1) at Frankfort (6-0) – The Panthers also must survive Kingsley on Tuesday to keep their perfect start going, and Glen Lake is aiming to gain a share of first place in the Northwest Conference too.

PHOTO: Berkley, here against Clawson in December, is one of this season’s biggest surprises. (Photo courtesy of C&G Newspapers.)