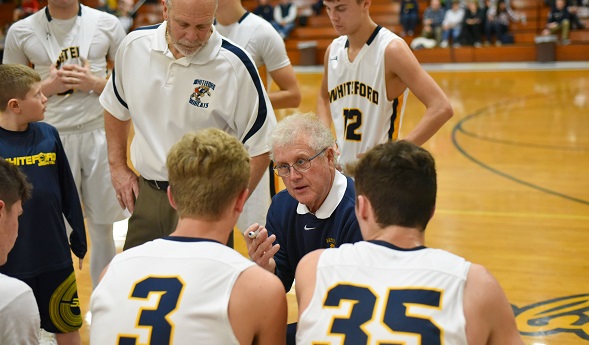 Last week was unkind to many who had enjoyed perfect runs through most of the first half of this boys basketball season.

We started last Monday with 34 unbeaten teams – and ended with only 22, as five of 10 in Class D and three of seven in Class A were among those to suffer first defeats.

Of course, the best teams rarely make it through an entire season unscathed – and often that’s a good thing. Five of eight teams on this week’s “Watch List” below have lost at least once and a couple have three defeats – but are still making major impressions as we roll along toward March.

1. Detroit Renaissance 60, Detroit Cass Tech 57 – More on Renaissance’s surge below, but this one announced it as Cass Tech had been in the talk as the best in Class A.

2. Kalamazoo Central 55, Mattawan 47 – The Maroon Giants are quietly off to another strong first half, sitting alone in first in the Southwestern Michigan Athletic Conference East after handing Mattawan its first loss of the season.

5. Buckley 62, Manton 60 – These teams went a combined 47-6 last season in both making it to the Breslin Center; they are a combined 13-6 with high aspirations again this winter.

Detroit Renaissance (8-3) – The Phoenix finished 6-14 only a season ago, but the rise has been sharp and impressive over the last two months. Right after downing Cass Tech last week, Renaissance also defeated Class B contender Detroit Henry Ford – which beat the Phoenix by three Dec. 19. The three loses this season are by a combined nine points; Renaissance fell early by four to Flint Carman-Ainsworth and then by a basket to Ann Arbor Huron in overtime (those two are 15-3 combined).

Okemos (7-3) – Last week’s 60-55 win over East Lansing requires context; Trojans all-stater Brandon Johns was unable to play, reportedly resting a lingering knee injury. Regardless, the victory pushed the Chiefs into a first-place tie with Grand Ledge in the Capital Area Activities Conference Blue after Okemos finished fourth and 12-9 overall last season. The only losses this winter were to the Comets, DeWitt and Troy Athens (24-6 combined) in December; the Chiefs are 4-0 in 2018.

Coloma (9-0) – A 54-49 overtime win over nonleague foe Kalamazoo Hackett on Saturday didn’t enhance Coloma’s standing atop the Southwestern Athletic Conference Lakeshore, but did further the Comets’ standing as a team to watch statewide (Hackett fell to 9-2). Coloma improved from five wins two seasons ago to 13 and second in the Lakeshore last winter, and it has a one-game lead on Fennville heading into their second meeting this season Friday. The Comets won the first 71-64 on Dec. 8.

Fremont (7-2) – After two seasons winning only six games apiece, Fremont improved to 13-8 last winter and has continued to climb. The Packers have won five straight to rise to first place in the Central State Activities Association Gold despite suffering a loss to third-place Reed City during a 2-2 start. They are perfect this month and started the run with a 54-49 win over second-place Big Rapids.

Capac (9-0) – The Chiefs have nearly guaranteed their first winning season since 2010-11, and are set up to play for more. Coming off an 8-13 finish a year ago, Capac finds itself tied for first in the Blue Water Area Conference with Richmond, and they’ll meet for the first time next week. The Chiefs handed former co-leader Almont its first league loss Friday, 41-35, and have won six games by double digits.

Ottawa Lake Whiteford (7-2) – The Bobcats’ Division 8 championship football success seems to be following into the winter, as they moved into first place alone in the Tri-County Conference with a 63-42 win over Sand Creek on Thursday. Next up is second-place Petersburg-Summerfield, and a victory would be coach John Rice’s 500th. Whiteford’s only losses this winter are to Class A Temperance Bedford and also much larger Toledo Waite.

Ashley (9-1) – The Bears have run off nine straight victories to move into first place in the Mid-State Activities Conference with a matchup against second-place Carson City-Crystal coming up this week. Ashley won nine games total a year ago – and had 19 victories over the last five seasons combined entering this winter. The lone loss was by only three to Portland St. Patrick in its opener.

Bellevue (8-0) – Last season’s 23-2 run – an improvement of five wins from the solid season before – might have been just another step as the Broncos are surging again. The most impressive win may have come Thursday, 45-39 over Camden-Frontier which sent the Redskins to 9-3. The Broncos also beat Class C Carson City-Crystal and Lakeview to win the Central Montcalm Holiday Hoops Tournament, and have a two-win lead in the Southern Central Athletic Association West.

Tuesday – Grand Rapids Christian (6-2) at East Grand Rapids (9-1) – These two sit together at the top of the Ottawa-Kent Conference Gold after Christian was first and EGR only fifth last season.

Tuesday – Warren DeLaSalle (7-2) at Detroit U-D Jesuit (8-2) – This will be the first of two meetings (at least) between the current co-leaders of the Detroit Catholic League Central.

Tuesday – Grandville Calvin Christian (7-1) at Grand Rapids Covenant Christian (10-2) – Both should be in the Class C statewide mix again after Covenant was runner-up last season and Calvin was runner-up in 2016.

Tuesday – Coloma (9-0) at Kalamazoo Christian (9-0) – The leaders of the SAC Lakeshore and Valley, respectively, have made similar big moves in their divisions with a similar opportunity to gain a little more statewide acclaim.

Thursday – West Bloomfield (5-4) at Clarkston (10-1) – The overall records don’t look close, but West Bloomfield trails the Wolves by just a win in the OAA Red after both made the Class A semifinals last season (and Clarkston won it all).