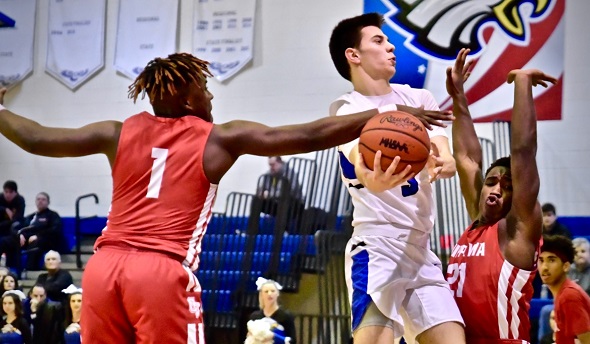 This week will see many of Michigan’s high school boys basketball teams cross the midpoint of their seasons, and things are starting to move quickly.

Most will finish Saturday at least 10 games into their schedules and with Districts beginning six weeks from tonight – which seems a long way off until you consider this season is already eight weeks old.

Expect to see District brackets added to the MHSAA Website this week and first-round games added to team schedules. Breslin Bound is powered by MI Student Aid and based on results and schedules posted for each school at MHSAA.com. To offer corrections or fill in scores we’re missing, email me at Geoff@mhsaa.com.

1. Detroit Catholic Central 69, Okemos 57 – The Shamrocks handed Okemos its first loss after a 10-0 start, and on the Chiefs’ home court, as they prepped for this week’s Detroit Catholic League Central clash with first-place Detroit U-D Jesuit.

2. Kalamazoo Central 46, Grand Blanc 43 – The Maroon Giants are just a two-point loss to Detroit Martin Luther King from undefeated and earned another impressive win in this one over the leader in the Saginaw Valley League Blue.

4. Belleville 81, Westland John Glenn 78 (OT) – These two remain among four tied for first in the Kensington Lakes Activities Association East after a matchup that saw Connor Bush score 26 for Belleville and Joe Moon IV score 44 for John Glenn to go over 1,000 for his career and break the school record for points in a game set in 1966.

5. Bellevue 57, Camden-Frontier 47 – Bellevue remains undefeated and atop the Southern Central Athletic Association West, while Camden-Frontier took its first loss this season but holds a slight lead in the SCAA East.

• Mattawan (9-0) – The Wildcats have gone one better than their 8-0 start last season, and now will look to best their final 15-7 mark from a year ago. Mattawan leads the Southwestern Michigan Athletic Conference West thanks to a 56-50 double-overtime win over second-place Stevensville Lakeshore on Friday. The Wildcats last season finished second in the SMAC East last season to Kalamazoo Central; those two meet in a nonleague game Feb. 5.

• Oxford (9-0) – These Wildcats have bested already last season’s final 8-14 record. And instead of tying for last in the Oakland Activities Association White like last season, they are tied for the lead in the OAA Blue. Oxford has won five straight games by double figures and takes on league co-leader Pontiac on Thursday.

• Bridgeport (8-0) – The Bearcats, Class B quarterfinalists a year ago, are pursuing their third straight Tri-Valley Conference East title and beat rival Frankenmuth 70-41 last week to kick off the league schedule. That big win followed up an impressive 82-69 victory over Detroit Renaissance at the Detroit Public School League Holiday Hoops Classic, and Bridgeport also owns a notable win over Detroit Henry Ford.

• Richmond (11-0) – Known most as a wrestling school perhaps, Richmond also boasts a boys basketball team that has won at least 16 games four straight seasons and is the reigning champ in the Blue Water Area Conference. This start has outdone any of the others from recent seasons, and the Blue Devils already own a one-game lead in the BWAC thanks to a 60-44 win over second-place Yale on Dec. 14.

• Clinton Township Clintondale (9-1) – A 12-point loss to league leader Madison Heights Madison on Dec. 18 is all that’s kept Clintondale from a perfect start and first place in the Macomb Area Conference Silver – and the Dragons get a second chance against Madison on Thursday. An opening win this season over Royal Oak Shrine is one of only two losses for the Knights and looking more and more like a good indication Clintondale will improve substantially on last year’s 12-10 finish.

• Quincy (9-0) – The two-time reigning league champ Orioles have charged into first place in the Big 8 Conference with wins against both second-place teams, Union City and Homer. Quincy finished 18-5 a year ago but lost to Homer in the District Final. The Orioles also have dealt nonleague foe Adrian Lenawee Christian one of its two defeats this winter.

• Bellevue (9-0) – The Broncos are a combined 54-4 over the last two-plus seasons and have won three straight league titles. As noted above, they lead the SCAA West and handed Camden-Frontier its first defeat last week; the Broncos then knocked Pittsford out of first in the SMAC East with a 10-point win Saturday. Circle Jan. 25, the first of two meetings between Bellevue and also-undefeated league rival Athens.

• Pellston (9-1) – The Hornets are tied for first in the Ski Valley Conference with Gaylord St. Mary, and will face the Snowbirds for the first time Wednesday after last week’s schedule meeting was postponed. Pellston’s defeat came by just two points to Division 3 Mancelona, and seven of its nine wins were by 30 or more points.

Thursday – Pontiac (11-0) at Oxford (9-0) – As noted above, these two are tied for first in the OAA Blue, and Pontiac obviously also has had a noteworthy start including an early victory over OAA Red leader Clarkston.

Friday – Detroit Cass Tech (7-3) at Detroit Martin Luther King (9-1) – The Technicians lead the PSL Midtown division by a win over King, with this their only meeting before a potential PSL Tournament rematch.

Friday – Okemos (10-1) at DeWitt (8-1) – Okemos can’t let the sting of last week’s first loss last long, as DeWitt is tied with the Chiefs for first in the Capital Area Activities Conference Blue.

Saturday – Flint Beecher (9-0) vs. River Rouge (7-1) at Warren Fitzgerald – The most intriguing of a strong slate at the Horatio Williams Freedom Classic pits strong statewide contenders in Divisions 3 and 2, respectively.

PHOTO: Although Clinton Township Chippewa Valley made the stop on this drive, Utica Eisenhower went on to a 44-33 win in the MAC Red last Tuesday. (Photo by Terry Lyons.)