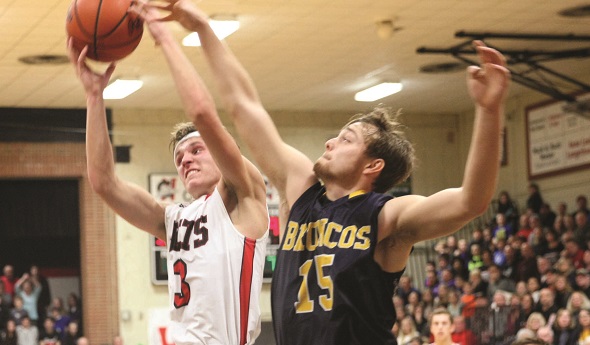 Those have been the headline grabbers in boys hoops over the last few weeks, and of course we touch on both below in this week’s Breslin Bound report powered by MI Student Aid. But there was plenty else to discuss too as we came out of halftime of this boys basketball season into a final dash full of exciting possibilities.

1. Powers North Central 76, Bark River-Harris 29 – The Jets have brought a lot of attention to their small community and Upper Peninsula basketball as a whole thanks to what this win earned them – an MHSAA record with 66 straight victories going back more than two seasons and including two Class D title runs.

2. Detroit Catholic Central 52, Detroit U-D Jesuit 51 – This was the first of two banner wins last week for the Shamrocks (who also downed Orchard Lake St. Mary’s 70-54); last season, DCC fell to the eventual Class A champion Cubs by 21 and 35.

5. Lansing Catholic 76, Williamston 72 – These two split the Capital Area Activities Conference White championship last season, but this counts as an upset after the Hornets (10-2) beat Lansing Catholic by 21 during the first week of this winter.

Melvindale (9-2) – The Cardinals have won seven straight since opening 2-2 and downed Brownstown Woodhaven 73-66 on Friday in a matchup of teams that entered undefeated in Downriver League play. Woodhaven is the reigning league champ, but Melvindale has an upper hand with this their only meeting of the season.

Sterling Heights (10-1) – The Stallions have taken major strides this winter after going 6-15 last season and winning a combined 13 games over the last three. That lone loss this run was in double overtime to Marysville, which they trail in the Macomb Area Conference Silver but face again Wednesday.

Fennville (9-2) – A three-point win over Gobles on Dec. 13 has kept Fennville atop the Southwestern Athletic Conference Lakeshore, and the Blackhawks can stretch the lead as they face the Tigers again Tuesday. Fennville is playing this season for a third straight league title, and the only losses were by one to Grand Rapids Covenant Christian and nine to Class A Byron Center.

Iron Mountain (11-1) – Last season’s Mid-Peninsula Athletic Conference co-champion (with Negaunee) has been chasing all season after falling to current leader Norway by four on Dec. 16. The Mountaineers – which beat Negaunee by four last week – get Norway again Feb. 10.

Sand Creek (11-0) – The Aggies downed second-place Ottawa Lake Whiteford 70-53 on Tuesday to move into first place alone in the Tri-County Conference. Those teams tied for fourth in the league last season when Sand Creek finished 11-11 overall, but it’s allowed only one opponent to get within 10 points this winter.

Bellaire (9-1) – The reigning Ski Valley Conference champion already has a two-game lead on the field after handing Pellston a 64-57 defeat on Jan. 19. The Eagles took a loss on opening night to Harbor Springs 40-37, but have looked more since like the team that made last season’s Quarterfinals.

Southfield Christian (8-2) – After playing, and winning a pair of District titles, in Class C the last two seasons, Southfield Christian is back in Class D. The two losses came during the season’s first three games to Class A Ann Arbor Pioneer and U-D Jesuit, and the Eagles beat Class A West Bloomfield by 10 on Tuesday.

Tuesday – Romulus (8-2) at Dearborn Heights Crestwood (10-2) – The Western Wayne Athletic Conference Blue has three teams with only two losses, and Crestwood sees the other two this week starting with the league leader.

Wednesday – Farwell (2-7) at Beaverton (10-1) – A win would give Beavers coach Roy Johnston 729 for his career, breaking the Michigan high school record set by River Rouge’s Lofton Greene from 1942-84.

Wednesday – Cornerstone Health/Technology (7-2) at River Rouge (12-0) – Cornerstone has played some tough competition and could be a challenger in Class C, and we expect to know more from this matchup.

Saturday – Flint Beecher (9-3) vs. Ypsilanti Community (9-3) at Delta College – This matchup of teams with high aspirations is the most intriguing of the Delta College Showcase.