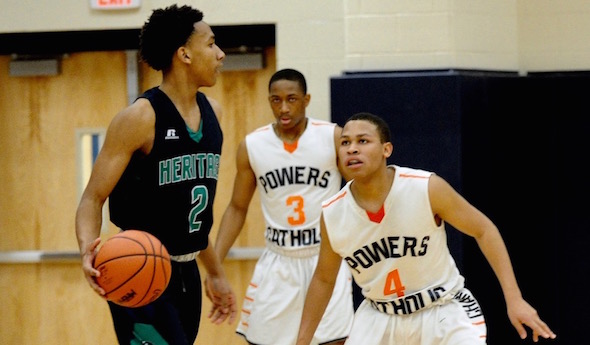 We’ve crossed the midpoint of this boys basketball season, and the week to come might end up one of the most memorable of the winter.

But looking into the future is just one part of the “Breslin Bound” report, and this week’s in particular includes a number of teams that have bounced back or taken another step to impress over the last two months.

1. Detroit U-D Jesuit 64, Warren DeLaSalle 45 – The Cubs moved into first place alone in a Detroit Catholic League Central with four teams including the second-place Pilots at 8-4 or better.

2. Saginaw Heritage 58, Mount Pleasant 56 – The Hawks moved to 8-4, one win shy of last year’s total, and handed Mount Pleasant its first loss to knock the Oilers out of the Saginaw Valley League lead.

5. Brimley 62, Cedarville 56 – The 10-2 Bays avenged a seven-point loss to the Trojans on Dec. 7 to move into a first-place tie with them atop the Eastern Upper Peninsula Athletic Conference.

Rochester (10-2) – The Falcons have risen from 0-20 three seasons ago to 9-12, then 11-11, and now first place in the Oakland Activities Association Blue. They’ve won seven straight and five of those by double digits, including a 16-pointer over Berkley (now 10-2) on Jan. 16 that was the Bears’ first defeat.

Sterling Heights Stevenson (8-3) – Stevenson switched from the MAC White to the MAC Red last season and dropped from 20-4 overall to 8-13. But the Titans have bounced back nicely and lead Dakota by a half-game in the standings after losing to the Cougars on Jan. 16. The rematch is Friday.

Big Rapids (9-1) – A first-round District exit to end last season combined with an early-January loss to Fremont might have quieted any Big Rapids talk, but the Cardinals sit tied with Fremont atop the Central State Activities Association Gold standings with six of their wins coming by double digits.

River Rouge (12-0) – The Panthers have seen only two games get to single digits – overtime wins over Detroit Osborn and West Bloomfield – and they lead the Michigan Metro Athletic Conference Blue after handing Harper Woods its lone defeat. The early run puts River Rouge at a combined 36-2 since the start of 2016-17, which finished two points from making the Class B Final.

Johannesburg-Lewiston (9-1) – Last season’s 6-15 finish is becoming a memory as the Cardinals have run off nine straight wins to take a two-game lead in the Ski Valley Conference. Eight of those nine wins have come by double digits. The lone loss came to Boyne City (now 8-3).

Kent City (11-0) – The Eagles have finished first or second all three of their seasons in the CSAA Silver, coming in runner-up a year ago. But none of those finishes started like this; Kent City leads the league thanks to a 30-point win over second-place Morley Stanwood on Jan. 12, and can equal last season’s win total with three more.

Fowler (9-1) – Class C powers Dansville and Pewamo-Westphalia were expected to battle it out for the Central Michigan Athletic Conference title, with another Class C foe Laingsburg pushing them. Instead, Fowler sits atop the league and among the most impressive teams in Class D, coming off a 41-40 win over the Wolfpack on Friday.

Munising (9-1) – Powers North Central’s winning streak may be over, but the U.P. still has its share of Class D power especially with Munising sliding to this class from Class C last year. The Mustangs lead the Skyline Central Conference large schools division, their only loss to Rapid River (now 8-1).

Tuesday – Clarkston (11-1) at Hazel Park (11-0) – What might be one of the top regular-season games this season pits the co-leaders of the OAA Red and also two of the chief contenders in Class A.

Tuesday – Richmond (8-3) at Capac (10-1) – A dream turnaround season for Capac (8-15 a year ago) could hit a new level with a win in this matchup of Blue Water Area Conference co-leaders.

Tuesday – Detroit U-D Jesuit (9-3) at Orchard Lake St. Mary’s (8-4) – Jesuit is the only undefeated team in the Catholic League Central, but needs to be cautious after defeating the Eaglets by just a point Jan. 12.

Friday – Flint Beecher (6-5) at Flint Hamady (9-2) – Beecher loads up the schedule with top teams from all over the east side of the Lower Peninsula, but got a major challenge in a one-point win over local and league rival Hamady on Dec. 19.

Friday – Spring Lake (11-2) at Grand Rapids Catholic Central (9-1) – League leader GRCC won big in the first meeting, by 41, but that remains the only O-K Blue loss for the second-place Lakers.