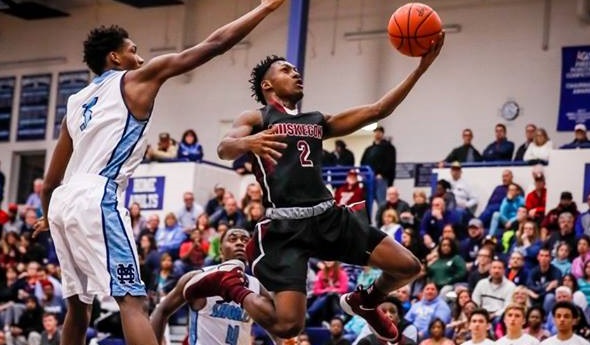 To say some of last week’s boys basketball results shook things up around the state might be an understatement.

Contenders in all four classes took defeats as others looked to fill their spots among the elite. Those that made our just-miss list this week included impressive upsets – like East Kentwood over Grand Haven and Ravenna over Whitehall – and the titanic Bridgeport win over Saginaw Swan Valley. But take a look at the games we did note, and more, as we move within four weeks of the start of this season’s MHSAA Tournament.

1. Clarkston 70, Hazel Park 39 – The reigning Class A champion Wolves are still the team to beat after handing Hazel Park its first loss of the season.

5. Flint Hamady 77, Flint Beecher 71 – The Hawks avenged a one-point loss to their rival from Dec. 19 and now sit with Beecher as the only Genesee Area Conference Red teams with only one league defeat.

Grand Rapids Forest Hills Central (11-2) – The Rangers opened the season with back-to-back losses on consecutive days by a combined three points. Since, they’ve been nearly unstoppable, with Friday’s 54-45 win over East Grand Rapids (9-4) the most recent of solid outings. Forest Hills Central finished perfect over the first half of the O-K White schedule and also earned impressive late December wins over Wyoming Godwin Heights (13-1) and Spring Lake (11-3).

Petoskey (12-1) – The Northmen took a two-game lead in the Big North Conference with a buzzer-beating 51-49 win over Traverse City West on Friday. The only loss was to host Grand Haven at the Buccaneers’ Invitational in late December. With size and experience, Petoskey will be dangerous emerging from the north during tournament time.

Parchment (9-3) – The Panthers can clinch a share of the Berrien-Cass-St. Joseph Conference Red championship with a win over fifth-place Comstock on Friday after surviving back-to-back scares against league foes. They’ll take it after finishing 4-17 overall and sixth in the league only a season ago.

Parma Western (10-3) – The Panthers are back on top of the Interstate 8 Athletic Conference after sharing the championship with Marshall a year ago. Last week’s loss to Mason was the team’s first since Dec. 15 – but Western then closed the week Friday by avenging that first defeat with a 51-43 win over league foe Coldwater.

Bath (7-5) – The Bees’ overall record isn’t that impressive, but they’ve won six straight with victories over Pewamo-Westphalia and Fowler over the last two weeks to stir up the Central Michigan Athletic Conference standings. The last loss before the streak came against league leader Laingsburg, which has to be more cautious heading into the rematch Wednesday.

Madison Heights Madison (10-3) – The Eagles clinched the Macomb Area Conference Bronze title last week and added to a seven-game winning streak. Madison should be plenty prepared for Class C teams when the tournament begins coming out of a regular-season schedule featuring mostly bigger teams. The three losses were by a combined six points to Royal Oak Shrine, Class A Berkley and Class B Ann Arbor Gabriel Richard.

Dollar Bay (11-0) – For good reason, undefeated Ewen-Trout Creek has gotten the majority of Upper Peninsula hoops attention this winter. But Dollar Bay shouldn’t be sneaking up on anyone and has a chance to snag some of the spotlight playing the Panthers on Wednesday. Dollar Bay leads the Copper Country division of the Copper Mountain Conference.

Mio (9-3) – The Thunderbolts trail undefeated Hillman and Oscoda in a strong North Star League Big Dipper division that has five teams with at least eight wins. They added to the league’s reputation with a 59-51 defeat last week of Ski Valley Conference leader Johannesburg-Lewiston, which is in Class C. Mio hosts Hillman on Tuesday.

Tuesday – Wayne Memorial (11-3) at Canton (14-0) – Among the most impressive wins of Canton’s perfect start was a 27-pointer over Wayne, which sits second behind the Chiefs in the Kensington Lakes Activities Association Black.

Tuesday – Ewen-Trout Creek (14-0) at Dollar Bay (11-0) – As noted above, this matches two of the most intriguing teams in all of the Upper Peninsula, with the Panthers also a Copper Mountain Conference leader in the Porcupine Mountain division.

Saturday – Muskegon (10-3) at Ypsilanti Community (10-1) – The leader in the O-K Black and the co-leader in the Southeastern Conference White, respectively, should be among Class A teams to watch at tournament time.

PHOTO: Muskegon, here against Muskegon Mona Shores in a 63-49 win on Jan. 26, takes on Ypsilanti Community in one of this week’s most intriguing matchups. (Photo by Tim Reilly.)