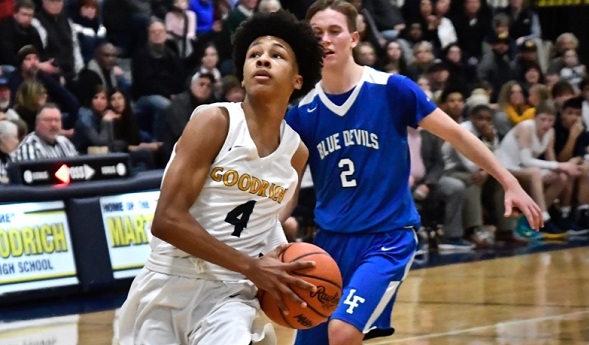 Temperatures across the state may fall below zero Wednesday and Thursday, but things are expected to warm up significantly by this weekend – and Michigan high school boys basketball will follow.

Conference champions are starting to be crowned, the Detroit Public School League Tournament begins this week and Saturday offers another major showcase of MHSAA title hopefuls facing off.

1. Detroit U-D Jesuit 70, Flint Beecher 69 – Division 1 Jesuit handed the second loss this season to Division 3 Beecher in a matchup of teams that could both end this season hoisting MHSAA Finals trophies.

4. Saginaw Swan Valley 61, Alma 60 (OT) – Swan Valley moved into a tie with Alma for first in the Tri-Valley Conference Central by handing the Panthers their first loss in league and overall.

5. Hudsonville 45, Rockford 39 – The Eagles, 10-12 a season ago, moved into first place alone in the Ottawa-Kent Conference Red by sending the Rams into second.

• Grand Rapids Forest Hills Northern (14-0) – After back-to-back seasons of finishing 16-8 and winning District titles, Forest Hills Northern may be on the verge of a few more steps up. A 64-53 win over Grand Rapids Northview on Friday put the Huskies in first alone in the O-K White, and they also have wins over O-K Red leader Hudsonville (by 23) and O-K Green second-place Holland Christian (by 12).

• Mount Pleasant (12-0) – The Oilers followed their Class A Semifinal appearance in 2014 with a sub-.500 record the following season, but have upped their win total every season since and are closing in on surpassing last year’s 18 victories. They sit atop the Saginaw Valley League Red and posted an impressive 56-44 win over Orchard Lake St. Mary’s last week at Saginaw Valley State.

• Marine City (10-2) – Marine City has clinched outright the Macomb Area Conference Bronze championship, its first league title in 34 years. All but one of its wins have been by double digits – and the losses were in overtime by a point to St. Clair in early December and two weeks ago to Blue Water Area Conference leader and one-loss Richmond.

• New Haven (13-1) – The Rockets, Class B semifinalists last season and the champions in 2017, have taken the first step on another run by clinching the MAC White championship with Friday’s 64-37 win over second-place Warren Mott. An opening-night victory over U-D Jesuit remains impressive, and New Haven’s lone loss – by five to Roseville on Dec. 4 – keeps looking better as the Panthers are 13-1.

• Saginaw Valley Lutheran (12-1) – Valley Lutheran this week can guarantee surpassing last season’s 13-8 record, and has been climbing in a big way. Ten wins are by double digits – including a 48-38 overtime victory over Ithaca two weeks ago that put the Chargers in first alone in the TVC West. The lone defeat came against TVC Central co-leader Swan Valley.

• Wyoming Potter’s House Christian (12-1) – The Pumas have won outright or shared six straight league championships, and they hold a half-game lead in the Alliance League again after beginning last week by handing Tri-unity Christian its first conference loss, 54-53. As noted above, Potter’s House followed with a big win over Howardsville, which entered last week unbeaten and outscoring opponents by 42 points per game.

• Big Rapids Crossroads (12-1) – A 53-47 win Thursday over then co-leader Manistee Catholic Central put Crossroads in first alone in the West Michigan D League and avenged an earlier 10-point defeat to MCC. Crossroads finished 7-15 just a year ago, but has eight wins this season by double digits.

• Martin (8-1) – The Clippers are one of three teams tied for first in the Southwestern Athletic Conference Lakeshore, with Division 3 Fennville and Division 2 Coloma, and after falling to Fennville on Jan. 11. Martin’s next win will give this team just as many as when it finished 9-13 a year ago, and seven of the first eight this winter have been by double figures.

Tuesday – Walled Lake Northern (14-0) at Milford (10-3) – The Mavericks can’t climb into first place by beating Lakes Valley Conference leader Northern, but second-place Waterford Mott could slip into a tie for the top spot in that scenario.

Wednesday – Traverse City St. Francis (7-2) at Elk Rapids (8-2) – St. Francis leads the Lake Michigan Conference by a game over the Elks, with this the first of two meetings scheduled.

Saturday – Kalamazoo Central (9-1) vs. Grand Rapids Christian (10-2) at Grand Rapids Union – The Maroon Giants lead the Southwestern Michigan Athletic Conference East, and the Eagles are tied for first in the O-K Gold.

Saturday – Benton Harbor (14-1) vs. Ypsilanti Lincoln (10-1) at Grand Rapids Union – The 6 p.m. Redhawk Classic game might be the best featuring the reigning Class B champ and a Division 1 title hopeful led by one of the nation’s top freshman.

PHOTO: Goodrich downed Lake Fenton 57-48 on Jan. 18 and remains a game off the lead in the Genesee Area Conference Red. (Photo by Terry Lyons.)