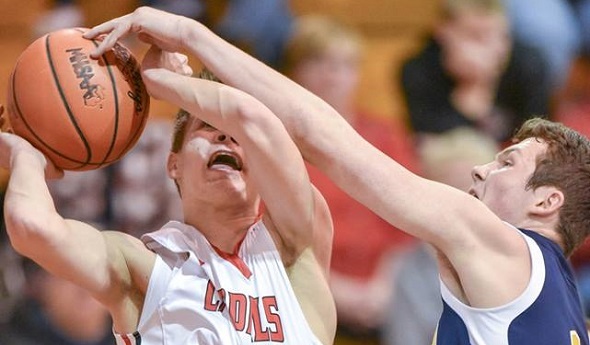 Aside from Detroit Western’s early-week upset of Class A contender East English, the first few days of this season’s District boys basketball tournaments went by mostly as expected.

And then Friday happened.

Brackets were shaken up all over the state during the District championship round – we highlight below five games in particular that popped out most – and a number of Regionals have a much different look than many might have anticipated a week ago.

See below as well for a preview of three Regionals from each Class – powered by MI Student Aid. Host sites are bolded, and matchups shown are for Regional Semifinals. (Click for brackets for every Regional in all four classes.)

1. Grand Rapids South Christian 51, Wyoming Godwin Heights 46 – The Sailors won a Class B District Final against a Godwin Heights team that finished 21-2 and had won six straight District titles while making the Breslin Center twice during that time.

2. North Muskegon 37, Kent City 33 – Both were league champions, but Kent City also hadn’t lost a game and finished 21-1 after falling in this Class B District Final.

4. Suttons Bay 45, Frankfort 42 – The Norsemen moved to 11-12 by eliminating a Frankfort team that shared the Northwest Conference championship and was expected to compete for a trip to East Lansing.

Always in the mix, Kalamazoo Central quietly has won 15 straight and is eight points from being undefeated this season. The Southwestern Michigan Athletic Conference East champion gets East Lansing, which has had an unexpected last few weeks with a coaching change but still features Mr. Basketball finalist Brandon Johns. White the Kalamazoo Central/East Lansing game features two teams that have gotten much of the attention, the night’s second game features two league champions – and Okemos swept the Trojans during the regular season to win the Capital Area Activities Conference Blue. Coldwater has won eight straight and claimed the Interstate 8 Athletic Conference title.

Muskegon has run off 14 straight wins to reach a familiar sport for the annual contender, and avenged its earliest loss of this season by downing Grand Haven 50-41 in the District Final. The Big Reds next get reigning Class A runner-up Grand Rapids Christian, which went 3-7 during the second half of the regular season but faced a number of top teams and is capable of continuing this run. West Ottawa handed the Eagles one of their early losses and followed with an Ottawa-Kent Conference Red title – a Regional title this week would be a program first. Forest Hills Northern beat one of the teams that beat West Ottawa – East Kentwood – and will be up for the upset task tonight.

Undefeated Skyline continued its perfect run through a competitive District and will play for its second Regional title in five seasons – but with some dangerous potential stoppers coming up. Howell emerged from a 2-6 stretch during the end of the regular season to claim a District title. Novi has been a new team since guard Trendon Hankerson returned from injury, putting together a nine-game winning streak that also include the Kensington Lakes Activities Association tournament title. Lakeland is another team to watch; the Eagles have won nine straight, and not counting two losses to Lakes Valley Conference champ Waterford Mott haven’t fallen to another since Jan. 16.

Benton Harbor, a semifinalist last season, has been among the handful of favorites expected to challenge reigning champ New Haven. The Tigers’ only loss was Feb. 3 to Class A Hazel Park, 77-70. But Unity Christian is a league champ, from the O-K Green, and has won 19 of its last 21 games. On the other side of the bracket, Wayland obviously is a surprise – but upset Wolverine Conference North champ Otsego (19-2) on the way to winning last week’s District. Dowagiac was the only other team to defeat Otsego this season, and the Wolverine Conference South co-champ surely will be eager for the challenge of avenging a 77-43 loss to Benton Harbor from opening night.

Tonight’s Semifinal at Clare features familiar foes: Alma shared the Tri-Valley Conference Central title and beat Standish-Sterling by 11 in their first meeting before losing the second by a point. Standish-Sterling finished sixth in the league but has won nine of its last 12. At Petoskey, reigning Class B runner-up Ludington has won eight of its last nine games and claimed the Lakes 8 Conference title. Boyne City provides an intriguing next opponent for a few reasons. The Ramblers, runners-up in the Lake Michigan Conference, are in Class B this season after many successful runs in Class C and are back downstate after downing three Upper Peninsula opponents in last week’s District.

GRCC is another of the forecasted few expected to give New Haven a run, and the Cougars have done everything to back that up winning the O-K Blue and losing only to West Ottawa and another former Class B contender in Wyoming Godwin Heights. Two league wins came over Spring Lake, which beat GRCC in last season’s Regional championship game. The other side of the bracket features a pair of teams eager to take advantage if GRCC/Spring Lake III turns exhausting. Fremont shared the Central State Activities Association Gold championship, and South Christian has won 12 of its last 14 – beating Grand Rapids Christian along the way and then upsetting Godwin Heights in last week’s District Final.

McBain opened this season 13-0 and retained a share of the Highland Conference championship. But the Ramblers most recent loss was Feb. 27, 50-37 to Glen Lake, which should make for an intense opener tonight. The Lakers shared the Northwest Conference championship, their only losses this season to reigning Class D runner-up Buckley. On the other side, Elk Rapids has won six of its last eight games and moved on after falling to Glen Lake in District games the last two seasons. Whittemore-Prescott has an opportunity to stun some unfamiliar foes after finishing second in the North Star League Big Dipper to undefeated Class D contender Hillman. The Cardinals have won 11 of their last 13.

Records here are deceiving for three teams and even more impressive for the fourth, given the shared circumstances. All four of these teams play in leagues with nearly all larger schools. Edison and Pershing both play in the Detroit Public School League East Division 1 with two Class A and a Class B team – and Edison went on to win the overall PSL tournament championship. Madison won a Macomb Area Conference Bronze as the only league member not in Class B. Loyola is the only non-Class B in the Detroit Catholic League AA, and all of its defeats came to Class A or B opponents. Edison reached the Class C Semifinal last season despite finishing 14-12; this time the Pioneers will have to fend off a Pershing team that won their two meetings during the regular season by nine and seven.

A pair of league champions anchor this Regional – St. Mary from the Huron League and Hanover-Horton from the Cascades Conference. The Falcons beat Tri-County Conference champion Ottawa Lake Whiteford in their District Final and are 46-1 over the last two seasons – losing last year only in the Quarterfinal. Up steps Napoleon, fourth in the Cascades this winter, after bouncing back from three losses to end the regular season with three victories last week. Hanover-Horton is riding a 16-game winning streak as it plays for its third Regional title in four seasons. But the Comets must be cautious. Greenhills repeated as a District champion last week, downing three 15-win teams to claim the title.

Four league champions will take the court at this site. Potter’s House won the Alliance League handing regular-season and District Final losses to annual Class D contender Wyoming Tri-unity Christian. Howardsville Christian and Lake Michigan Catholic were two of three teams to share the Berrien-Cass-St. Joseph Conference White title. They split their regular-season meetings, LMC winning the first by 12 and Howardsville claiming the rematch by seven. But Bellevue is likely the favorite this week. The Broncos won the Southern Central Athletic Association West, and 19 of their wins were by 10 or more points. Their only loss was to SCAA East champ Hillsdale Academy (21-2).

This Regional provides an interesting opportunity for probably the winningest third-place team in the state. Kingston finished third in the North Central Thumb League Stars division as International Academy won the league title and beat Kingston big twice. FIA has won 16 straight. Fulton lost five of its last six to end the regular season but bounced back with three wins last week and eliminated rival Fowler (16-6) in the District Final. All Saints actually rebounded from an 0-5 start against nonleague opponents, including FIA and Kingston, to finish second in the NCTL Stripes.

Rapid River and Carney-Nadeau might be considered favorites in other Regionals, but are stuck as just really strong underdogs hoping to shake up a possible rematch between Ewen-Trout Creek and Dollar Bay. Those two met in one of the Upper Peninsula games of the year Feb. 7, a 51-42 win for Dollar Bay at Michigan Tech. But Carney-Nadeau eliminated three-time reigning Class D champ Powers North Central 53-40 in its District Final after falling to the Jets twice during the regular season. Next up is an E-TC team that has won seven of its eight games since the Dollar Bay loss by double digits. Rapid River knocked out a league champion in Munising during its District run, and aside from a pair of losses to Class C Norway is otherwise unbeaten since Jan. 18. Dollar Bay has been more or less unstoppable. The Blue Bolts downed Ontonagon 69-46 in the District Final after squeaking out one and five-point wins over the Gladiators during the regular season. No other opponent has gotten closer than nine.

PHOTO: A Carsonville-Port Sanilac player gets his hand on a shot, but Kingston went on to win last week’s Class D District opener. (Click for more from Varsity Monthly.)