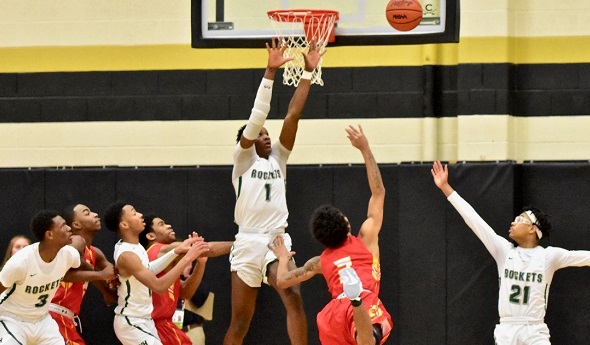 Class B could feature the most entertaining matchups of this weekend’s Boys Basketball Finals at Michigan State University’s Breslin Center.

From one side of the bracket will emerge a longtime power – Benton Harbor, seeking its first title in more than a half century, or 14-time winner River Rouge.

On the other side, reigning champion New Haven is coming off its first MHSAA title and looking to repeat led by star junior Romeo Weems – who will surely get some time facing Grand Rapids Catholic Central standout Marcus Bingham, Jr., as the latter works to lead his team to its first Finals championship in this sport.

Tickets cost $10 per pair of Semifinals and $10 per two-game Finals session (Class C and Class B). All Semifinals will be streamed live on MHSAA.tv and viewable on a pay-per-view basis. The Class D, A and C championship games will be broadcast live on Fox Sports Detroit, while the Class B Final will be shown on Fox Sports Detroit on a delayed basis at 10:30 p.m. Saturday. All four championship games will be streamed live on FoxSportsDetroit.com and the FOX Sports Go! app. Free radio broadcasts of all weekend games will be available on MHSAANetwork.com.

GRAND RAPIDS CATHOLIC CENTRAL
Record/rank: 23-2, No. 7
League finish: First in Ottawa-Kent Conference Blue
Coach: T.J. Meerman, fifth season (73-43)
Championship history: Has never appeared in an MHSAA Final.
Best wins: 63-52 (Regional Semifinal), 80-39 and 59-40 over honorable mention Spring Lake, 73-49 over Grand Rapids Christian, 90-84 over Detroit Country Day.
Players to watch: Marcus Bingham, Jr., 6-11 sr. F (16.8 ppg, 10 rpg, 3.7 bpg); Jacob Polakovich, 6-8 sr. F (14.2 ppg, 10.5 ppg).
Outlook: GRCC has won at least 20 games for the second straight season and upped its win total the last four under Meerman on the way to its first Semifinal since 1992. Bingham was a Mr. Basketball Award finalist and is plenty to handle – but he has lots of help as well. In addition to Polakovich in the post, junior guard Darrell Belcher is putting up 14 points per game, and junior guard Austin Braun is averaging 7.8 points and 7.5 assists per game.

RIVER ROUGE
Record/rank: 23-1, No. 4
League finish: First in Michigan Metro Athletic Conference Blue
Coach: Mark White, second season (47-3)
Championship history: 14 MHSAA titles (most recent 1999), five runner-up finishes.
Best wins: 50-43 over honorable mention Detroit Old Redford in Regional Final, 59-44 over Dearborn Divine Child in Quarterfinal, 75-32 over St. Clair Shores South Lake in Regional Semifinal, 48-42, 56-45 and 77-45 over Harper Woods. Players to watch: Jayvien Torrance-Jackson, 6-1 sr. G; Bralin Toney, 5-10 jr. G. (Statistics not submitted.).
Outlook: River Rouge is back at the Semifinals for the second straight season and after a one-point overtime last time loss kept it from a first championship game berth since 1999. Torrance-Jackson not only is the only starter back from that team, but also the only senior on this one. Toney also saw time off the bench in last season’s Semifinal and joins him in the backcourt, while the frontcourt includes two 6-6 post players. The lone loss this winter was to Class D semifinalist Southfield Christian.