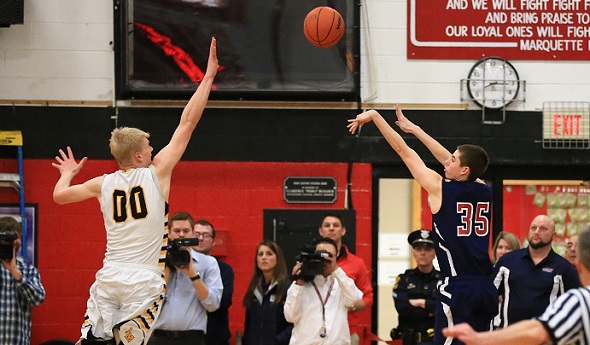 The majority of teams playing in this weekend’s Class C and D Semifinals have been waiting decades for this opportunity.

Six are seeking their first MHSAA titles. Three are playing for their first Finals berths, and two hope to appear in championship games for the first time since separate champions were awarded by peninsula in Class B, C and D during the 1930s and 40s.

All four Class C and D Semifinals will be played Thursday, with all four championship games Saturday.

And now, a look at the semifinalists in Class C and D. Click on the name of the school to see that team’s full schedule and results from this season. (Statistics are through teams' Regional Finals.)

GRAND RAPIDS NORTHPOINTE CHRISTIAN
Record/rank: 20-5, unranked.
League finish: Second in Ottawa-Kent Conference Silver.
Coach: Jared Redell, third season (47-23).
Championship history: Has never played in an MHSAA Final.
Best wins: 48-36 over No. 3 Shelby in the Quarterfinal, 82-52 over Fennville in the District Final, 58-55 over Class B No. 3 Wyoming Godwin Heights, 93-53 over Class D honorable mention Baldwin.
Players to watch: Preston Huckaby, 5-11 sr. G (15 ppg, 3.3 apg); Kual Nhial, 6-6 sr. F (12.4 ppg, 6.0 rpg).
Outlook: NorthPointe is another team that enjoyed a fresh start in the tournament after losing three of its final four regular-season games – although the Mustangs did finish second to Class B semifinalist Godwin Heights in their league and are the only team to beat the Wolverines this season. This will be NorthPointe’s first Semifinal, and it’s a tough matchup for opponents in part because of its balance offensively; junior 6-5 guard Tyler Baker (11.3) and senior 6-5 guard Andrew Holesinger (10.1) also score in double figures, and Baker and Huckaby both have made more than 40 3-pointers this season.

MORENCI
Record/rank: 23-2, unranked.
League finish: First in Tri-County Conference.
Coach: Jim Bauer, 10th season (141-84).
Championship history: Has never played in an MHSAA Final.
Best wins: 60-43 over Wyoming Tri-unity Christian in the Quarterfinal, 48-36 over Hillsdale Academy in the Regional Semifinal, 60-51 over Adrian Madison, 58-49 over Clinton.
Players to watch: Austin Sandusky, 5-5 sr. G (14.1 ppg, 4.1 rpg, 4.0 apg); Alex Thomas, 6-3, jr. G (10.8 ppg, 4.6 rpg).
Outlook: Morenci is playing in its first Semifinal after winning in its first Quarterfinal appearance since 1954. The Bulldogs avenged both of their losses this season, and Tuesday extended a run to eight straight wins by at least 12 points by beating perennial power Tri-unity Christian. The team has 10 players, and all contribute with seven averaging at least five points per game. They also can shoot; seniors Tucker Stover and Hunter Borton both make better than 42 percent of their 3-point attempts, and Sandusky strikes at 39 percent success.

WATERFORD OUR LADY
Record/rank: 25-0, No. 3.
League finish: First in Detroit Catholic League Intersectional 1.
Coach: Paul Robak, second season (42-6).
Championship history: Has never played in an MHSAA Final.
Best wins: 58-29 over No. 4 Allen Park Inter-City Baptist in the Quarterfinal, 52-35 over Southfield Bradford, 58-45 over Harbor Beach.
Players to watch: Nick Robak, 6-4 sr. G (23.6 ppg, 7.3 rpg, 63 3-pointers); Andrew Kline, 6-4 jr. G (13.2 ppg, 5.8 rpg, 6.6 apg, 3.2 spg, 42 3-pointers).
Outlook: Our Lady has advanced to its third Semifinal and first since 1993 keyed by a sizable and sharp-shooting backcourt. Nick Robak scores the most but also makes 47 percent of his shots from the floor, 38 percent from 3-point range and 86 percent from the free-throw line. Although the list of opponents might not impress in terms of state rankings, Our Lady went undefeated in a league that also includes three Class B and a Class C team and then won the Catholic’s League’s Class C-D Tournament. Only three wins were closer than 10 points.