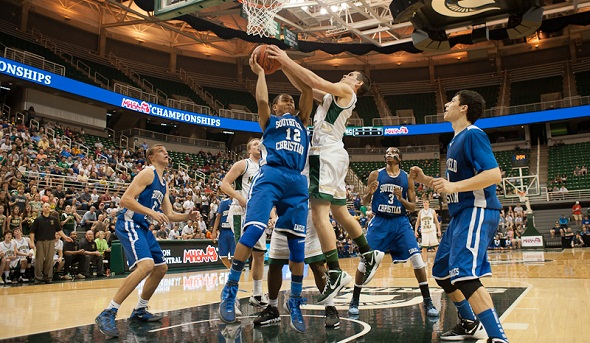 EAST LANSING – All four Class D Semifinalists came to the Breslin Center this weekend seeking their first MHSAA basketball title. In fact, none had even played in a championship game.

Southfield Christian looked like a lock to reach its first Final, given its No. 7 ranking, the teams it had beaten so far and a Semifinals opponent – Muskegon Catholic Central – that was just two wins over .500 entering the postseason.

But with 2:16 to play, that was anything but guaranteed with the Eagles leading by just two points. So an Eagles assistant coach with a little bit of experience winning games – former Detroit Pistons guard  Lindsey Hunter – called over his son Lindsey III and seniors Chris Dewberry and Gavin Toma.

“He said, ‘You’re seniors. This is your last year. Is this how you’re going to come down and lose like this, let these guys come out here and be tougher than you?’” Hunter III said. “We looked at each other on the court and said ‘Guys, we’re not going to lose this game. No matter what it takes.’”

A little scare on the way to the MHSAA Finals often turns out to be a good thing. And Southfield Christian survived theirs with a 78-74 win over the Crusaders.

They had beaten all of their postseason opponents by at least 14 points entering Thursday. But none of those teams had a player like MCC’s Jason Ribecky.

Southfield Christian players and coaches might have nightmares about the 6-foot-4 senior for a few days. He seemed to be everywhere, playing all 32 minutes and making 14 of 22 shots from the floor for a game-high 37 points.

“We were like, ‘They’re wearing down. They’re wearing down.’ But they did not wear down,” Southfield Christian coach Josh Baker said. “We missed some rotations. We tried to double (Ribecky), but that left other guys open. They hit a lot of open shots too. They made us pay for everything, and they were a little tougher than us on the glass.”

But the Eagles indeed had a little more left at the end.

Toma hit a 3-pointer to make the score 72-70, and that was followed by the timeout and inspiring words by Coach Hunter to the team’s seniors. Campbell tied the score up with a rebound and lay-in after the timeout, but Hunter III then scored five straight to push the lead to 77-72 with 1:28 to play.

MCC again pulled within three with 54 seconds to go, and got the ball back with 21 left on the clock. Ribecky pulled up for a 3-pointer that was on line – but just a bit deep, and it bounced off the back of the rim. “It looked good. But it didn’t go in,” he said.

Dewberry led Southfield Christian with 25 points and eight rebounds, while Toma added 20 points. Hunter III had 16 and freshman Bakari Evelyn came up big with 14 and four steals off the bench.

Campbell and senior Jacob Budde both added 13 points for the Crusaders, who finished 17-10.

“Coming into this tournament 11-9, not knowing what to expect but knowing what our goals were, and to exceed those goals and make it here is a fantastic thing,” MCC coach David Ingles said. “It hurts right now. But I’m so proud of my guys … for their efforts, not just tonight but during the whole tournament run.”