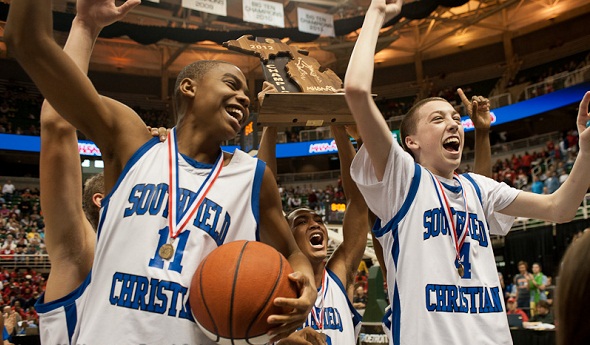 And although the Eagles improved to 11-10 last season, they still seemed a long way from what they finished Saturday.

“This season has been the greatest basketball we’ve ever played,” Toma said. “SCS hasn’t been a basketball school, until this year, so to win it for SCS is great. We put in so much work. It’s unbelievable.”

Both teams made their first MHSAA championship game appearance Saturday. Southfield Christian entered the postseason ranked No. 7, while Climax-Scotts was No. 5.

The Eagles put on one of the most incredible shooting performances in MHSAA Finals history. They tied the 2007-08 Saginaw team with a championship game record 12 3-pointers, including eight in the first half when they connected on 53 percent of their shots from behind the arc.

Southfield Christian (24-2) shot 46 percent from 3-point range for the game, a few ticks higher than its 43 percent from the floor as a whole. 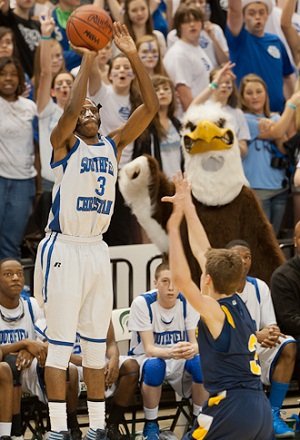 The Eagles student section sang “Happy Birthday” to Dewberry during warm-ups .That, on its own, might’ve made for an unforgettable moment.

But the now 18-year-old senior also had a game-high 30 points, including six of those 3-pointers, on 10 of 13 shooting from the floor.

“My team, we talk about it all the time in practice. The coach says it. They say I’m one of the best shooters in the state, so we’ve got to get me the ball,” Dewberry said. “So when they had me open, or when I got myself open, or when there was a pick to get me open, they got me the ball. And I capitalized on it.”

Senior Lindsey Hunter III added 15 points and eight rebounds and Toma had 13 points. Hunter is 6-1 and Toma 6-2, and with Dewberry they took advantage of a few inches in elevation on the Panthers’ defenders.

“Their athleticism once they’re in person … We’ve got big guards, fast guards, and they’ve played defense all year long,” Climax-Scotts coach Steve Critchlow said. “(But) Dewberry had six 3-pointers for a 6-foot-2 guard, and that’s a tough matchup for us. We hoped to make our bigs the tough matchup. And their defense was just phenomenal in the paint.”

Southfield Christian contained 6-7 juniors Malachi Satterlee and Aaron Cook to a combined nine points and six rebounds, and the Panthers to 21 percent shooting from the floor as a team. Senior Jacob Hinga led his team with 11 points and eight rebounds.

Climax-Scotts finished 26-2 and will graduate five seniors – although three starters this season were juniors, including the all-stater Satterlee.

“We didn’t even realize what’s going on, because we were focused on the next game. But now we have time, back in the locker room, to sit and reflect on what they just did,” Critchlow said. “We had a lot of talent we haven’t had … but the hard work we put in with that talent, and the good attitude, that’s something we have to reflect on and say this is how we’ve got to get to the next step.”

“I think the highlight, honestly, was … the end, when the crowd stood up and supported us even when we lost,” Hinga added. “They were all there. Just to look around and see we made it to Breslin; we didn’t win, but we’re second place. That’s a pretty good feeling.”