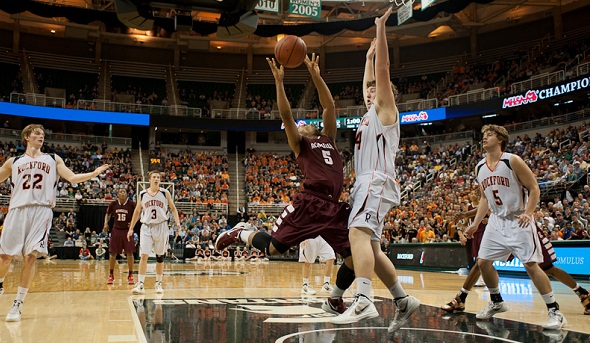 As Rockford’s Mark Pearson watched the ball complete its arc, he figured good or not, it wouldn’t take away from the incredible run his unranked Rams made this postseason.

“We’ve worked so hard this year, and to just see that shot go up … all our practices, all our summer stuff we’ve done, and all through the year, it’s all been worth it,” Pearson said. “If it would’ve gone in, we wouldn’t have been satisfied. But by the same token, it (would’ve been) a good year.

When that final shot caromed off the rim, the Rams celebrated a 62-61 victory and their first championship game berth since winning the Class A title in 2003.

Rockford will face top-ranked Saginaw in the Final at 4 p.m. Saturday. The Eagles, ranked No. 2 at the start of the tournament, finished 22-4.

The Rams (22-5) split the O-K Red title with both Hudsonville and East Kentwood this season, and needed to make some key plays to get to Breslin – especially after trailing Okemos by 10 in Tuesday’s Quarterfinal.

Rockford gave up its most points Friday since opening night – but also scored its second-most this season.

“Maybe people were underestimating them. We were being a little bit too laid back on defense,” Romulus senior Ray Lee said.

And the Rams showed plenty of guts again when it counted in the Semifinal.

After the teams come out of halftime tied, Romulus began breaking away in the third quarter and went up 49-44 with a period to play. The Eagles’ lead stood at six with 5:50 to play. It seemed their time to secure a Finals bid had come.

Rockford went on an 11-0 run that included all four of standout junior guard Chad Carlson’s points, plus five of junior Chase Fairfield’s game-high 17. With 1:43 to play, Romulus suddenly found itself down five, 59-54.

“You hope and you wish and you pray, but making those expectations is tough,” Rockford coach Nick Allen said. “We hoped and wished, and maybe prayed a little bit too.”

Johnson hit two free throws to give the Rams a 61-57 lead with 1:16 to play, but Romulus knotted the score again with 31 seconds left. Johnson, a 6-foot-6 sub, was fouled again with 7.6 seconds to play.

His first free throws went off the back of the rim. He second fell to give Rockford a 62-61 lead. But Romulus still had hope – until Caywood dashed it a bit by stealing the inbounds pass.

Rockford did miss two more free throws after that. But with only 3.4 seconds left, the Eagles couldn’t set up much more than the final 3-point try.

The Eagles have now made at least the Semifinals in four of the last eight seasons – but Friday’s loss was the latest in a frustrating run. Romulus lost by one point in its 2009 Semifinal and by two in overtime in 2008. The Eagles made the Class A Final in 2005, but lost by three.

“It’s hard to do. I can say that, because we were ranked No. 1 in the state the last two years and didn’t make it here,” Romulus coach Nate Oats said. “So I’m happy we got here this year, but it’s not real satisfying anymore to get here. … I’m a little bit tired of getting here and not getting it done.”