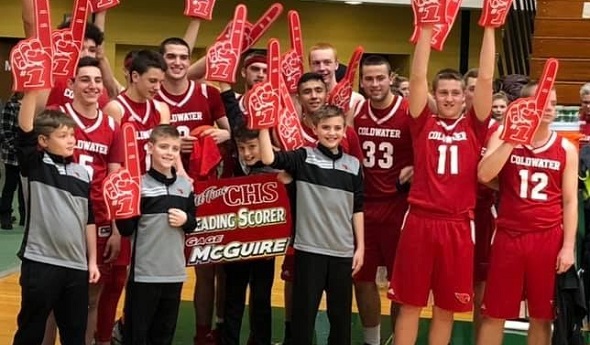 Four year ago, Gage McGuire sat down with his mother, Carrie, and made a list of high school basketball goals. That piece of paper is still hanging on his bedroom wall, and nearly all the items have been checked.

“Looking back on it, I can’t thank her enough,” said the 6-foot-6 Coldwater senior forward. “Once you set a goal, you know you can chase it.”

Except for hitting a bit of turbulence earlier this month that resulted in a three-game skid, the Cardinals (14-5) have been flying high. The cast includes starters Dylan Targgart, a 6-2 junior center who has won an individual Division 2 Finals championship in the shot put as well as a team state title. Damon Beckhusen, a junior guard who helps set the tone for everything the Cardinals do on the court, was an all-Interstate 8 Athletic Conference football selection. And underclassmen Ethan Crabtree (freshman guard) and Spencer Rodesiler (sophomore guard) have played more like veterans.

But it’s undeniably McGuire’s team, and his list of accomplishments is quite impressive. The small forward set an all-time scoring record for the Cardinals back in December when he hit 1,180 points — a tally that will be significantly higher once the season ends. McGuire was an Associated Press Class A all-state honorable mention last year, and his sophomore season, as well as the Interstate 8 Most Valuable Player last winter.

Averaging around 20 points, 12 rebounds, 2.5 assists and 1.5 blocks and steals per game, the future Emporia State University player has one last thing to check off that list.

“One of my goals was to become the all-time leading scorer,” McGuire said. “When I got it, it was pretty exciting. But I’d much rather have a state championship than an individual record.”

Noticeable improvement on defense and rebounding the ball this year has made McGuire one of the more complete players in the state.

“He has gotten a lot better,” first-year Coldwater coach Aaron Bucklin said. “He has really bought into the kind of system we want to play. That’s something he has added to his game, and his rebounding numbers are up a ton from the previous year. 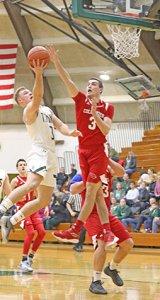 “He is able to do so much. If we are being pressed, he can be the guy to bring the ball up the court as well. We just kind of try to exploit any mismatch. Defensively, he does a pretty good job on the ball and can guard all five positions as well. He causes problems for guards with his length and centers with his athletic ability.”

McGuire’s actions off the court, including a work ethic in the classroom and a willingness to speak up in the locker room have equally influenced the program.

“I think it’s just his sense of leadership and his ability to add that part to the game and the mental toughness he can bring to this game,” Bucklin said. “I think in years past he has kind of gone with the flow and done very good things on the basketball court. But his senior year he has really stepped up and become a leader. He gets everybody else involved, whether it’s offseason workout stuff or getting into the gym extra times. He’s that guy. He wants to be in the gym 24/7. That’s been big for us.”

Emporia State, a Division II school in Kansas that competes in the Mid-America Intercollegiate Athletics Association, believes McGuire can do the same there. But McGuire is focused on closing out his prep career strong.

After losing three straight, McGuire and fellow captains called a players-only meeting to get things sorted out as the regular season winds down and the Cardinals prepare for their Division 1 District Semifinal game Feb. 27 against either Battle Creek Lakeview or Battle Creek Central.

“We called everybody out — just kind of a man-to-man conversation to see what we’re doing wrong,” McGuire explained. “The past couple games we had averaged like 20 turnovers per game. You’re not going to win the game with 20 turnovers. We have a special team, and we needed to figure it out to make the deep run in the playoffs that we know we’re capable of.

“Everybody took it like a man, and I think it worked out really well. I asked everyone if they truly believed we could win state. Everyone said yes.”