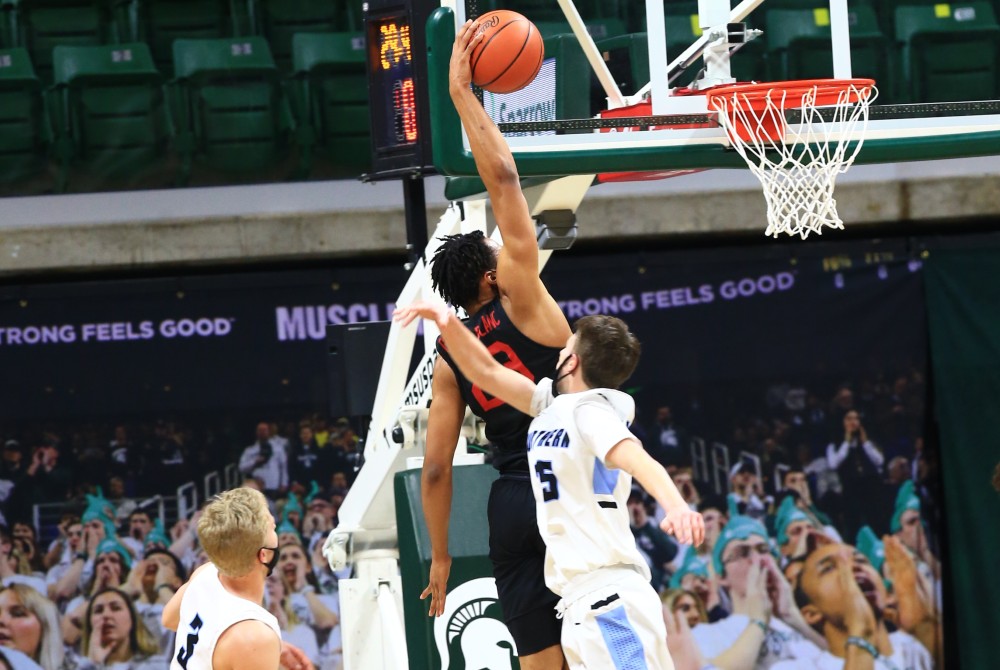 The Bobcats had surrendered the lead to Grand Rapids Forest Hills Northern after building a 12-point cushion just minutes earlier. They hadn’t come back from a second-half deficit this season. The games they had trailed in, they lost. So it was all new to Thomas.

“I didn’t know that,” said Thomas, speaking to whether his players had it in them to bounce back after facing adversity. “This is the first time we’ve been down, other than in our losses. Truthfully I didn’t know.”

Well now he does. Grand Blanc battled back and found a way to get it done against the Huskies, pulling out a 68-58 victory in a Division 1 Semifinal on Thursday at the Breslin Center. The Bobcats led the entire first half and stretched the lead to 42-30 after senior RJ Taylor found junior Ty Rodgers inside for a dunk with 6:59 to play.

But what seemed to take the wind out of the sails of the Huskies proved to be a wake-up call.

Northern would score the game’s next 15 points. Senior Ethan Erickson got things going with a short jump shot in the paint. Less than a minute later, senior Gavin Fisher hit a 3-pointer, and followed it up with a layup on the break and another 3-pointer to cut the lead to two points. Grand Blanc would turn the ball over on its next two possessions, with Northern senior Trinidad Chambliss scoring on a layup and senior Cole Rynbrandt hitting a 3-pointer to give his team its first lead, 45-42.

“We had a great run in the third quarter to take the lead,” Northern head coach Joe Soules said. “We were in control of that game. And we’re sitting there going, ‘We’re going to be just fine.’ We’ve talked about it all year, ‘Be in the moment.’ The guys battled back just the way they were supposed to.” 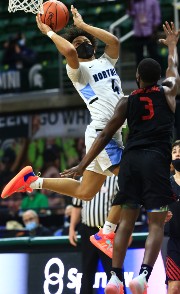 But the Huskies couldn’t maintain that momentum. Grand Blanc stopped the bleeding with a pair of Rodgers free throws, and proceeded to close the quarter with a 9-5 run to take a one-point lead into the fourth quarter. The Bobcats then scored the first seven points of the fourth to pull away from the Huskies. Sophomore Timonte Boyd opened the run with a layup — off a pass from Taylor — and sophomore Amont’e Allen-Johnson extended the lead to six with his 3-pointer. Rodgers capped it off by collecting a defensive rebound and sprinting down the court and finishing with a layup to make it a 58-50 game.

“It’s just heart,” Rodgers said of his team’s comeback. “Every day in practice, we work on situations, like us only being up by two with such and such many seconds left. We have a lot of heart, and our guys trust in me and RJ as leaders and we push each other. When someone’s not making their shots, we lift each other up.”

Rodgers finished with 19 points and 12 rebounds, while dishing out six assists. He set the tone early, with a hard drive to the basket for the game’s first score. Grand Blanc jumped out to a commanding 10-0 lead in the first 2:15 of the game.

“We don’t have anyone who quite matches up with (Rodgers), Soules said. “Not many teams in the state do. He’s a wonderful player, a great athlete. He got to the rim and exploded a couple of times. We just couldn’t contain that. Cole (Rynbrandt) and Ethan Morello did a phenomenal job of staying in front of him. He gets to the rim, almost at will, against high school competition with his frame.”

“Our guys fought and clawed, they overcame some adversity today,” Thomas said. “But they hung in there and stayed together. We talked about if things don’t go well, ‘You guys better get together and push each other up because you’re going to need it.’ They didn’t fold when they could have. They clawed back into the game and put things together to accomplish their goals.”

Erickson led Northern with 19 points, while Fisher and Chambliss added 16 and 13, respectively. The Huskies finished the season 17-2.

“This was the greatest four-year stretch in Forest Hills Northern history,” Soules said. “We won three straight conference championships, multiple Districts and it’s only the second time we’ve ever been to the Breslin. It’s been so fun watching these young men mature, especially over the last 18 months. These seniors have been tremendous ambassadors, not only for Forest Hills Northern but for the game of basketball.”