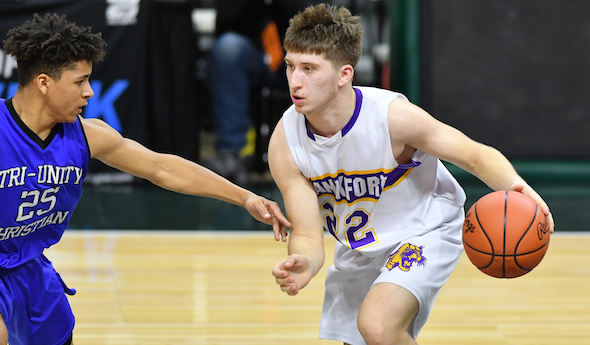 For most of the first three quarters, it seemed the Panthers were cruising toward reaching the MHSAA championship round for the first time.

Then, over six minutes of game time, they found themselves running the risk of being on the wrong end of the largest comeback in Finals weekend history.

After senior Ethan Ness’ free throw with eight seconds left on the clock, and then one more stop on the other end of the court, Frankfort emerged with a 44-43 win over Wyoming Tri-unity Christian to reach the final day of the season for the first time in this sport.

The Panthers will take on Southfield Christian in Saturday’s first Final at 10 a.m., after a day to recover from also watching a 23-point lead dissolve between the third and fourth quarters.

“We trust our teammates. If we go down, we get ready, we get back up, and we trust everyone on this team,” Frankfort sophomore guard Jack Stefanski said. “Everyone is here for a reason. We’ll fight through anything.

“This has never happened in Frankfort history for boys, and no one thought we’d be good this year. … We knew we had to step up this year, with a new coach and new players. We had to start our legacy, and this is how we started.”

And for all the reasons mentioned above, it was unforgettable.

Frankfort (21-5) did graduate its top six players from last season, and coach Dan Loney did take the program over this winter after previously serving as an assistant. The Panthers did finish second in the annually-strong Northwest Conference – but then lost to sub-.500 Buckley in the regular-season finale and needed overtime wins twice to get to Breslin Center.

Thursday’s start, against a Tri-unity program with four Class D championships and four more runner-up finishes, was truly impressive. In part with a 10-0 run to finish the first half, Frankfort took a 26-12 advantage into the break, then opened the third quarter with nine more consecutive points to make it 35-12 with 2:22 to go in the period. 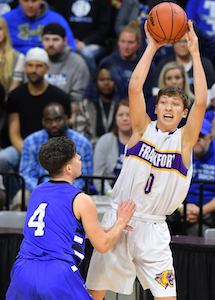 But longtime Tri-unity coach Mark Keeler had a card or two left to play – namely, a defensive press that contributed to 10 Frankfort turnovers over an ensuing 27-2 comeback.

“I’ve had that happen before, having coached as long as I have. The key is we need to focus on defense – but saying it and doing it are two different things,” said Keeler, who has led the team to 599 wins over 32 seasons.

“When we went to the press … they finally made up their minds that they wanted to give it everything they had. All of a sudden they were focused on defense, not focused on offense, and that takes the pressure off. You relax, and all of a sudden you’re getting shots to fall.”

But like in nine other games won by six or fewer points this season, Frankfort came through. First, senior guard Will Newbold tied the score with 3:26 to play. Ness gave the Panthers a three-point lead at 2:39 with a long-range shot, and Newbold made the margin four with a free throw with 55 seconds left.

They needed every one of those points, as Tri-unity senior Brayden Ophoff and freshman Brady Titus sunk buckets to bring the score even at 43-43 with 20 seconds to play. But Ness was fouled on the next possession and connected on one of two free-throw tries to take back the lead once more. A group of Panthers held their ground in the lane on Tri-unity’s final attempt for the win, and Frankfort celebrated.

“I’m not sure why it keeps coming down to this,” Loney said. “We knew they would make a run at some point tonight. It was not going to be a blowout by any means. When they brought that full court pressure, it rattled the guys a little bit.

“(But) these guys have found ways to win close games all year. They’re a resilient bunch, no matter what the score is. I can’t tell you guys how many close games we’ve had like this this year, and these kids have stepped up to the plate and ended with a win.”