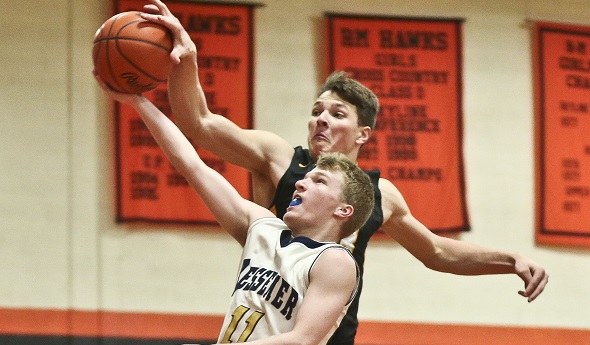 ESCANABA – You would think it difficult to be a 6-foot-7 athlete and weigh 235 pounds and not be known outside your home area.

It can happen. And it did happen.

Jake Witt has basically flown beneath the radar of high school sports aficionados heading into the final months of his high school career. That despite the fact he is perhaps the premier senior athlete in Michigan's Upper Peninsula and among the best in the state.

The Ewen-Trout Creek senior has scored more than 1,000 points and is close to 1,000 rebounds in basketball. He is a two-time 8-player all-state football selection, earning those honors after the only two seasons he played football.

He lives about 10 miles from tiny Ewen, where E-TC is located on M-28 about 55 miles from the peninsula's western border with Wisconsin. His school has fewer than 100 students and plays basketball against mostly similar-sized schools from its side of the U.P.

Only a handful of colleges even knew about him, in either sport, primarily because of location and the fact he did not participate in the travel ball circuit. Michigan Tech University, about 70 miles north of his home, knew all about him and offered him a basketball scholarship. Witt signed his letter of intent this fall.

Northern Michigan University, about 110 miles east in Marquette, was in football contact with him before basketball got on board. NMU's basketball team was Witt's second choice behind Tech, where he had participated in some team camps.

Wisconsin-Green Bay was the lone Division I school on his trail, although Northwestern University showed some initial interest. Ferris State and Grand Valley State – which play in the Great Lakes Intercollegiate Athletic Conference with Tech and NMU – also were interested.

"It was nice not having as much attention and having a low profile," Witt said a day after the Panthers beat Bessemer 63-59 last week to raise their record to 4-0 this season. "It was nice playing on a team that does not have much hype. I can just go out and play."

Despite the low profile, it is surprising he escaped notice on the recruiting trail. After all, how many players his size run the 40-yard dash in 4.8 seconds, are used as the primary ball handler on the press break, shoot 3-point field goals with 50 percent accuracy and dominate inside despite constant double- and triple-team defenses?

"He is a big-time athlete, a big-time performer in the U.P.," said veteran Tech coach Kevin Luke. "He is bigger, faster and stronger than anybody up here."

With that pedigree, it is surprising Witt escaped attention of the major schools, although the U.P. is far from even the outlying recruiting paths and not known as a breeding ground for high-caliber cagers – and Witt has not played in Lower Michigan or Wisconsin.

"If he played just one summer of AAU ball (or played downstate) he would have had a ton of Division I schools after him," said E-TC coach Brad Besonen, adding "his location and not advertising himself" were factors in his lack of attention.

Witt had an opportunity to join a travel team in Escanaba, but declined because of six-hour round-trip drives for practice on Wednesday and Sunday nights in addition to lengthy travel for games. "It was mainly my location," he said of avoiding travel teams.

The colleges that did not chase Witt may have missed someone who could be a big contributor. 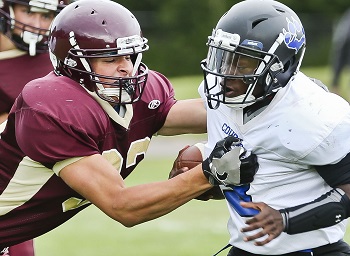 "We rely on him for everything," said Besonen, citing his protection of the basket that includes blocking shots and/or forcing shot adjustments, ball-handling and floor-wide scoring skill. "He is very agile, has great feet and excellent body control."

Besonen said Witt's lack of "advertising himself" is because of strong family ties, which also were a factor in his decision to stay within about five hours of home. "He likes to hang out with his family (and friends), bass fish and weight lift.

As a powerful presence, Witt draws major defensive attention – and through his unselfishness, he has developed into an excellent passer. "Our biggest problem is not being able to take him out for a lot of rest. He has a big frame, and he gets gassed. We don't play slow," said Besonen.

This season Witt is averaging 33 points and 14 rebounds a game. In football, where E-TC students played for Ontonagon in a co-op arrangement, 13 of his 28 pass receptions in a run-oriented offense were touchdowns, and he covered about 600 yards. Last year at E-TC, he set an MHSAA 8-player record with 25 TD catches while nabbing 71 passes for 1,698 yards.

Playing college football was considered, but he had 12 years of basketball experience. With only two years of gridiron experience and at the 8-player level, he probably would have been a football red-shirt and may have bulked up to play tackle, although his desire was to be a tight end and catch passes.

Tech gained his scholarship signature because of its splendid academic reputation.

"After college and entering the work force, the degree you get up there (in Houghton) is worth so much," said Witt, who is still pondering his academic direction.

"I am definitely excited to finish my senior year with my college decision already made," he added, noting that he is looking forward to working with Tech assistant coach Josh Buettner, a former GLIAC all-star for the Huskies. "Josh is one of the best big-men coaches in the GLIAC, and Coach Luke is also a very good coach."

Witt, who is a good fit for the blue-collar Tech brand of basketball, will likely play a 3-4 spot with the ability to venture outside to force mismatch situations. "We feel like we are getting a good ball player, a great blue-chipper," said Luke.

After towering over his prep opponents, Witt knows it will be an adjustment to battle players of equal size or bigger when he gets to Tech. "It will take a lot of getting used to playing bigger guys," he said, expecting to get more one-on-one opportunities than in high school.

Besonen firmly believes Witt will adjust the college level. "They could benefit from him being there right now. Add another year and offseason conditioning, and he could be helpful next year," said Besonen.

"He is still building (his game). The adjustment level will be huge for him, especially at his position," Besonen added, noting Witt must improve his footwork. "His feet are coordinated and quick."

Witt may be virtually unknown now. But clearly, he has the potential to become well known.