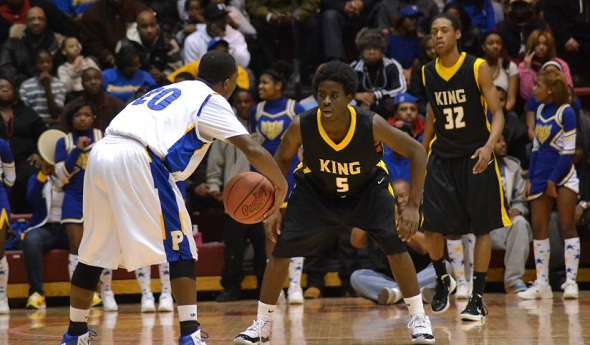 The Detroit Martin Luther King boys basketball team came into this season riding high hopes – and high outside expectations too as many saw the Crusaders among teams to beat in Class A this winter.

And King made good right away, with a 10-1 start that included wins over Detroit Country Day and Bay City Western.

That made the Crusaders' Jan. 20 game at Detroit Pershing arguably the biggest in the Detroit Public School League this regular season -- and King's 87-78 loss to the Doughboys a letdown that spiraled into three losses in four games heading into the PSL Tournament.

“In retrospect, we look at it as almost a blessing in disguise,” King coach Pierre Brooks said. “It was kind of a reality check. We needed to go back to the drawing board, clean up some things as far as strategy. I think we peaked at the right moment.”

It’s tough to argue with that. King avenged that Pershing loss by beating the Doughboys 76-69 in Thursday’s PSL Final at Detroit Mercy’s Calihan Hall. The PSL championship is King’s first since 1999, and the performance earned the team one of Second Half's High 5s this week.

Climbing out of that downturn started with a team meeting. Brooks, for his part, didn't have to do much talking. The Crusaders have eight seniors, led by four-year varsity players Dennis Norfleet and Malik Albert. They were bent on finishing with a flourish instead of a disappointment.

And Brooks had a sound plan. King is known for aggressive man-to-man pressure defense. So in the tournament, Brooks put his team in a zone. That new look seemed to throw off opponents – the Crusaders won their four PSL Tournament games by an average of 10 points, and also avenged an earlier loss to Crockett by beating the Rockets 69-67 in a semifinal.

Albert, who leads the team scoring 23.1 points per game, had 29 in the final including 16 in the fourth quarter. Freshman center William Abbott, who averages 2.6 points and 4.5 rebounds per game, added 12 and 13, respectively.

Brooks, who also coached under Benny White for three seasons at King before taking over the program last winter, said his players have begun to come down from the celebration and refocus on their next goal. They host their Class A District beginning March 5. And on the other side of the bracket is Detroit Southeastern, which also beat King last month and in the District Final a year ago.

“We’ve got guys who have been on varsity the last four years … (and) they’ve been through it all in terms of highs and lows,” Brooks said. “They constantly talk about how they want to end their senior year. They’ve got that desire and passion.”