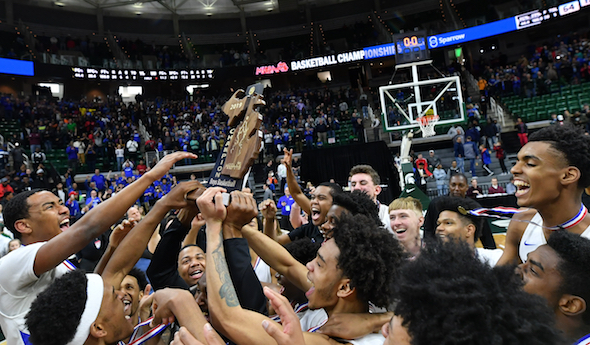 EAST LANSING – All eyes were on Ypsilanti Lincoln freshman Emoni Bates on Saturday as the seconds ticked away in the Division 1 Boys Basketball Final.

None were on Lincoln senior Jalen Fisher. But that all changed when the buzzer sounded.

Fisher’s rebound and jumper as time expired gave the Railsplitters their first MHSAA boys hoops title with a 64-62 victory over U-D Jesuit at the Breslin Center.

The last-second shot was the first to win a championship game featuring the state’s largest schools – formerly Class A, now Division 1 – since Lansing Sexton defeated Hamtramck in overtime in Class A in 1959.

Fisher’s shot ended a dramatic final quarter, which saw Lincoln (23-4) rally from a nine-point deficit. The Railsplitters took possession of the ball in a tie game with 1 minute, 20 seconds remaining, and drained the clock to set up a final shot.

That shot was supposed to be for Bates – considered the top freshman in the country – who gathered the ball in the backcourt but was immediately doubled as he came across half court.

“We trapped him, trying to get the ball out of his hands,” U-D Jesuit coach Pat Donnelly said. “I thought they got a decent, a clean look up top, but it was forced way out. That was what we talked about going in, that we were going to double (Bates) if he caught the ball.”

Bates passed out of the double team to senior teammate Amari Frye, who launched a 3-pointer from the top of the arc. He thought it was good – he remarked he thinks every shot he takes is good – and so did Fisher, but it hit the side of the iron and caromed to a wide open Fisher who capitalized with the game-winner.

“I thought it was good, but it hit the top of the rim and came in my hands, so I just shot it and it was good,” Fisher said. “I just shot it, and when it went in, I just saw black. Then I saw people on top of me. It was a good feeling though.”

Fisher, who played all 32 minutes and finished with 16 points, fell immediately to his back after hitting the shot and was mobbed by his teammates near the Lincoln bench. 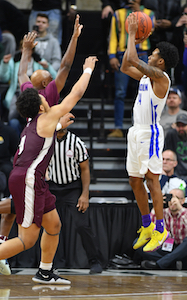 “I talk to my kids about living in the moment, and this was a moment that nobody saw coming but us,” Davis said. “I just think it’s great to have some kids you can take and you start with them when they’re freshman – Amari, Tahj (Chatman), Jalen came when he was a junior – but I’ve been instilling a championship mentality in Tahj and Amari for four years. Then we add somebody like Jalen with exceptional speed, toughness and a will to win, then you add somebody like Emoni Bates who can carry us through tough games and make big shots, and do everything the other guys couldn’t do. It just came out so beautiful, man.”

The Cubs (25-3) led for most of the game and nearly all of the second half after taking an 11-point lead into halftime. Daniel Friday scored 19 points, while Julian Dozier added 18 and six assists to put their team in control and up 60-51 with five minutes to play.

But Lincoln fought back and went on an 11-0 run, taking a 62-60 lead on a Frye layup with 1:38 remaining. Dozier responded immediately with a layup of his own to tie the game, but the Cubs wouldn’t see the ball again in the final 1:20.

“We’re the same kind of team as them; we score points in bunches,” Davis said. “We can get on a run and score. We’re capable of making runs just like them, so I keep telling my team, ‘Hey, keep doing what we do, keep applying pressure on both ends, and some shots will go down for us.’”

Bates scored in spurts himself, finishing with a game-high 23 points despite not having his best shooting night (7-of-22 from the floor and 1-of-7 from 3-point range). He was 8-of-8 from the free-throw line, however.

The Cubs played Friday on Bates for much of the game. Friday was giving up five inches to the 6-foot-9 Bates, but had a 45-pound weight advantage. Jordan Montgomery, who was giving up more than a foot in height, also countered with strength.

“(The U-D Jesuit defense) was good, but I just wasn’t making shots today,” Bates said. “I was getting to my spots, but my shot just wasn’t falling.”

Bates also had six rebounds and three blocks for the Railsplitters, while Frye finished with 15 points.

Montgomery added nine points, all on 3-pointers, for the Cubs, while University of Massachusetts-bound senior Jalen Thomas had six points and seven rebounds.

“I want to congratulate Ypsilanti Lincoln on a tremendously hard-fought victory – they're a good team,” Donnelly said. “Coming into this game we heard all this stuff about, ‘You have to stop Emoni, stop Emoni,’ but we were a lot more concerned with more than Emoni. They have some good players out there.”