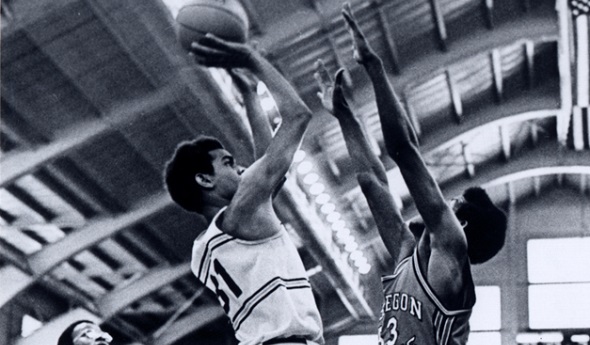 Rouge again met Muskegon Heights in the 1972 Class B Final after defeating the Tigers 71-65 in the previous season’s championship game. This time, late-game heroics helped Rouge pull out a 65-64 win, earning the program its 12th championship and last under Greene’s guidance.

The Panthers trailed 64-57 with less than a minute to play. Ralph Perry scored with 45 seconds left to make the deficit five, and he also was fouled. He missed the ensuing free throw, but teammate Byron Wilson put back the offensive rebound to get their team to within 64-61. Leighton Moulton pulled them within a point on a jumper with 23 seconds left. After a Heights turnover, Moulton attempted to drive for the game winner but was fouled before he could get off a shot. With only two seconds left on the clock, and needing to make at least the first free throw to send the game to overtime, he connected on both to seal the win.

Click to read a look back from the MHSAA “Legends of the Games” archives, and see below for 27 minutes of film from the game that remains a classic in state hoops history.

PHOTO: River Rouge’s Leighton Moulton pulls up for a jumper during the 1972 Class B Final. (Photo courtesy of the Lofton Greene Family Archives.)