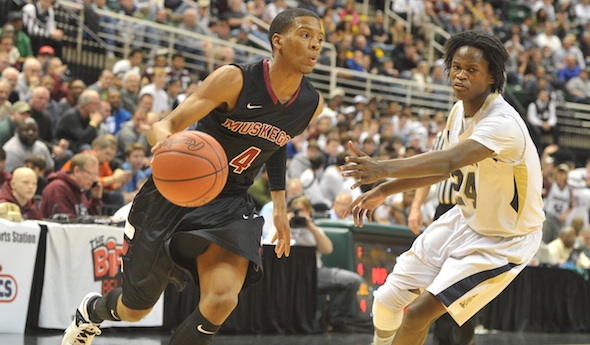 EAST LANSING – Muskegon High School has waited a long time for this.

And after waiting one more year than they'd hoped, the Big Reds finally have earned the opportunity to play for their first MHSAA boys basketball title since 1937.

Senior Deshaun Thrower said he and his teammates thought last year might’ve been theirs – but fell by three points to Grand Rapids Christian in a Quarterfinal.

Playing Friday in its first Semifinal since 1947, Muskegon earned that title chance with a 63-47 win over Mount Pleasant at the Breslin Center.

“Last year we were 32 minutes away from here, and we felt we could’ve won it. We beat ourselves,” Thrower said. “That feeling never left us. It’s something we’ve prepared for and something we go off of every game and every practice.”

The top-ranked and undefeated Big Reds (27-0) will finish this season facing either Detroit U-D Jesuit or Bloomfield Hills at noon Saturday.

And despite discussions about Mount Pleasant possibly pulling off the biggest comeback in MHSAA Semifinals history – the record is 18 points – the result never felt completely up for grabs after the end of the first quarter.

Muskgon led by as many as 23 points, nearly halfway through the third quarter before the Oilers were able to wither the advantage to nine twice during the fourth quarter. But they could get no closer. 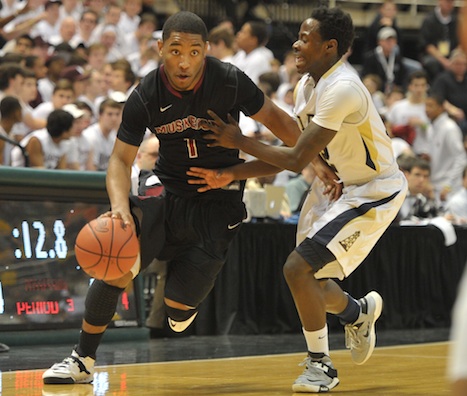 “When you dig yourself a hole the way we dug it, you’ve got to press so hard to try to make a comeback because you’ve got to start giving up things on the defensive end," Mount Pleasant coach Dan Schell said. "And when you don’t capitalize when you do have opportunities, it’s huge because possessions are so limited and important at that point in time.

“You can go down the stretch when we had a chance, but the first 8 to 14 minutes is what cost us the game.”

All five Muskegon starters scored between nine and 14 points and grabbed 4-6 rebounds. Combined, the starters shot 50 percent from the floor and scored all but five of their team’s points.

Thrower – this season’s Mr. Basketball Award winner – scored only nine points, but grabbed six rebounds to go with five assists. Kennedy had 13 of his points during the first quarter as Muskegon jumped to an 18-9 lead.

“It’s the flow of the game. Because I think in that starting lineup, we’ve got five guys who can put it in the basket,” Muskegon coach Keith Guy said. “(Kennedy) got it going early and it didn’t do anything but help us. Hopefully he can do the same thing (Saturday).

Mount Pleasant, itself ending a long Semifinals absence by playing in this round for the first time since 1981, finished 22-5 to double its win total from 2012-13.

“People around the state who know basketball know how hard it is to get through our Regional because you have to go through Saginaw or Saginaw Arthur Hill every year, or a good Flint team,” said Schell, an Oilers player during the early 1990s. “So just to get out of the Regional, we were happy but not content.

“We sure wanted to bring a state championship back. Hopefully we’ll get another special group some day and we’ll find a way to get back here.”

HIGHLIGHTS: (1) Mount Pleasant got a 14-point, nine -ebound effort in the Class A Semifinal against Muskegon from Jaleel Hogan. Here he takes a feed from Aaron Leasher and scores to give his team a 4-2 lead. (2) Off the long miss, Muskegon's Deyonta Davis scores on the putback for two of his 14 points. He was one of four players in double figures for the Big Reds.