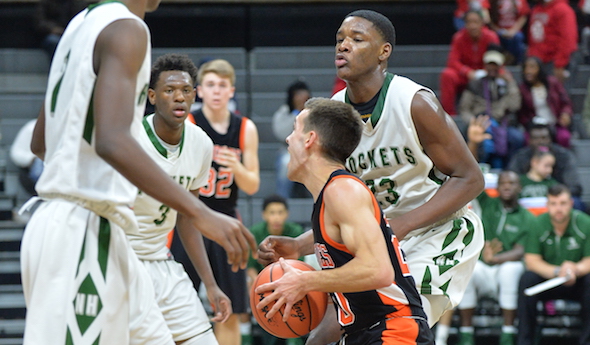 EAST LANSING – The New Haven boys basketball team has made a habit of lighting up scoreboards with explosive offensive performances.

But in their biggest game of the season, when pulled into a slowed-down game by Ludington, the Rockets dug deep and won with defense.

They held Ludington scoreless for the first 6½ minutes of the fourth quarter Saturday on the way to a 45-36 win to claim the Class B title at the Breslin Center. It was the first MHSAA Finals title for the Rockets, who were also making their first appearance in a boys basketball championship game.

“It was a great game, they’re a great team – they took away things that we do and played a great zone,” New Haven coach Tedaro France II said. “We kept our composure. It wasn’t a game that if you told me, we would come here and win this way. We scored the lowest point total we scored the whole year, and we found a way to win.”

The Rockets held Ludington to 11 of 49 (22.4 percent) shooting from the field, and while they were credited with just four blocks – all by sophomore Romeo Weems – the presence of shot blockers clearly caused problems for the Orioles, especially in the fourth quarter, when they shot 2 of 15 (13.3 percent) from the floor.

“You have to give a lot of credit to New Haven for that,” Ludington coach Thad Shank said. “They’re long and athletic and make it hard to finish. I thought we got a lot of great looks tonight, but that’s the game of basketball; sometimes they don’t always go in.”

Weems, who is already fielding Division I college offers, led all scorers with 19 points. He added 10 rebounds and three steals as well. Senior Eric Williams, Jr., had 14 points and seven rebounds for the Rockets (27-1), and Ashton Sherrell grabbed 11 rebounds.

Ludington was led by Calvin Hackert, who had 16 points. Sam LaDuke scored 10, and Noah Laman pulled down 10 rebounds for the Orioles. Six of Hackert’s points came in the final 1:30 on a pair of 3-pointers. Those were the only points the Orioles scored in the final quarter.

“We went with our man-to-man press trapping (in the fourth quarter), and they called a timeout because I don’t think they knew what to do,” Weems said. “I started giving everything I had left, getting scrappy, started rebounding more and got more aggressive.”

The game was played at a pace Ludington dictated, as the Orioles killed clock with long possessions and limited second-chance opportunities for the Rockets despite a massive size disadvantage. Ludington actually grabbed more offensive rebounds than the Rockets (14-10), and matched the Rockets in second-chance points (11).

Thanks to that, New Haven’s lead was just one heading into the fourth quarter.

“It was absolutely the way we wanted it to be,” Shank said. “We were hoping we would have the ability to control this game with our offense a little bit coming in. Be aggressive but patient, and really force them to guard a lot of things, and keep them from getting out in transition, and we did a pretty good job of that.”

Ludington (25-3) led by as many as eight, taking a 15-7 lead in the second quarter. But a Weems 3 sparked a 16-4 New Haven run to end the first half, giving the Rockets a 23-19 lead heading into the break. The game remained tight from there until the Rockets were able to break it open in the final four minutes of the fourth quarter.

“We started off and nobody was hitting shots,” Weems said. “I just looked at (Williams) and was like, ‘He’s not in it yet,’ so I hit the shot and was like, ‘I have to hit this and let him know I have his back.’

For France, a New Haven graduate, bringing home a Class B title was extra special.

“It just means a lot – you could see all the fans here – it just means so much to our school, to our town, the Village of New Haven,” France said. “This sport here is what a lot of people live through. I had a family that’s been coming to the games the last two years – they were sick, the wife is dying. He said they come to watch these kids play, and when they come they don’t feel pain, they don’t feel stress. For that hour and a half, they’re just there to watch these kids play, and it brings so much pride to them.

“Like I tell (the players), you’re not just playing for yourselves, you’re playing for more than just you, and these kids get that.”

Ludington’s season ended with its first trip to an MHSAA championship game since 1953, and one night after a buzzer-beating overtime win against River Rouge.

“It’s pretty cool to know that we made history and this team will probably never be forgotten,” Hackert said. “It’s a huge accomplishment. It’s just awesome, and we’ll never forget it.”