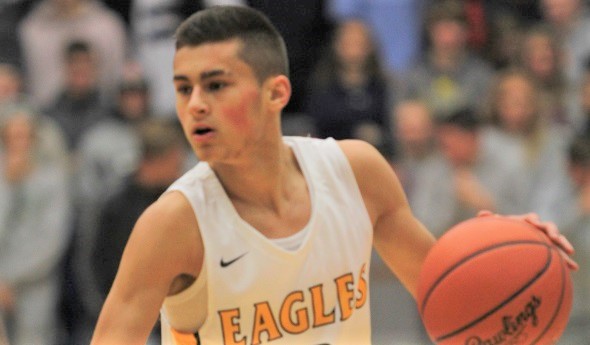 HUDSONVILLE – Max Perez remembers the despair he and his Hudsonville teammates felt after a disheartening 61-60 loss to East Kentwood in last season’s Division 1 Regional Final.

The Eagles stormed back from a 19-point second-half deficit only to watch their season end in the closing seconds.

Hudsonville hopes to use the defeat as a rallying cry for this season.

“The motivation we have going into the season is really high. … We were that close to going to the Quarterfinals, which only three other Hudsonville teams had done,” Perez said. “We beat them twice (in the regular season) and they got us when it counted, so that really stung us.”

Perez, a 5-foot-10 point guard, played a major role in the team’s success despite missing nine games with a broken thumb.

That was the first time the four-year varsity player had suffered an injury that forced him to sit out for an extended period of time.

“It was really tough, then I got the news that I would be out six weeks. But I just knew that I couldn’t get down on myself, and I would be back,” Perez said. “I just had to pick up my teammates every day in practice and encourage them and stay positive.”

Perez will be the floor general for an Eagles’ squad that has eight seniors, including 6-foot-7 Justin DeGraaf, who moved back to Hudsonville after five years living in Indiana.

Through an intense passion for the game and a strong work ethic, Perez has made giant strides since beginning his high school career as an undersized freshman on the varsity.

“I think my game has improved a lot,” Perez said. “I’m stronger now, I’m bigger now and I’ve really worked on my game. I’ve implemented more of a drive game because when I was a freshman I was small and just stayed on the 3-point line and shot jumpers.

“As the years have gone on, I’ve become more mature and added more of an arsenal to my game while also improving my defense, which was important to me.”

“I’ve seen a ton of growth in all aspects and every year he has grown up as a player and matured, but I think the largest leap has been from last year to this year and it’s been significant,” Elliott said. “He’s stronger and more mature, and he’s more of a calming force than in the past. He seems more at ease and relaxed.”

Perez, who averaged 15 points per game last season, has had a basketball in his hands since before he could walk.

“He’s more than a classic gym rat; he’s non-stop in the gym and on the gun, and there’s no doubt that it has made him a very good basketball player and an incredible shooter,” Elliott said. “He’s an extremely confident kid and a confident shooter, and that comes from repetition and time spent in the gym.”

Perez’ dedication recently helped him fulfill a goal he’s had since middle school.

Last week he committed to Indiana Tech, an NAIA school, on a full-ride scholarship.

“They showed me love since day one, and they were my first offer,” Perez said. “I love the coaching staff, their facilities and campus and I love the guys. I think it will be a great help for the season just to know that I’m playing for my team and not doing anything for myself since I’ve already committed to college.

“I can focus on the season and winning, and I think we can go a long way with this talented senior group.”

Elliott is thrilled for Perez to get the opportunity to play at the next level.

“I’m incredibly happy for Max,” he said. “Anytime you see a kid that puts in the time and the energy and the passion that he has, and then to see him get rewarded, as a coach, it’s awesome to see. I’m excited that he could make a decision now so he can totally relax and can just play now. He has that behind him.”

Perez scored 21 points in a season-opening win over Godwin Heights. It was a solid start for a team that has lofty aspirations.

“Our goal is to win the conference and win Districts, but we know how good teams are around us and the O-K Red is brutal,” Elliott said. “We have high expectations, and we feel like we can beat anybody on any given night. However, we also feel like we can be beaten by anybody. We have some things to work on, but we are very excited.”