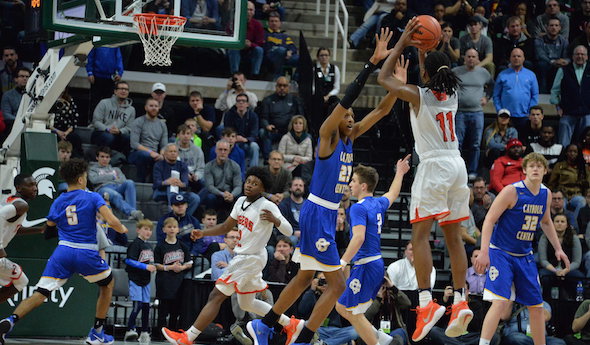 Johnson, a 6-foot-6 wing and power forward, finished an all-state season with what he called the biggest shot of his life, drilling the game winner as Benton Harbor claimed its first MHSAA boys basketball championship since 1965 with a 65-64 overtime victory over Grand Rapids Catholic Central in Saturday’s Class B Final. His 3-pointer with 10 seconds to play gave him 24 points total in earning the Michigan Army National Guard “Performance of the Week.”

Johnson showed a statewide audience why he’s considered arguably the top sophomore in Michigan, making 10 of 20 shots in the championship game, including three 30-pointers, and grabbing 11 rebounds. He had nine points, nine rebounds and six blocked shots in Friday’s 60-49 Semifinal win over River Rouge, and finished this season averaging 17.9 points, 12.9 rebounds, 4.9 assists and 3.2 blocks per game. Johnson also started as a freshman, averaging just over 14 points, 14 rebounds and three blocks per game in also leading the Tigers to the 2017 Class B Semifinals, where they lost to eventual champion New Haven.

Benton Harbor has one of the richest basketball traditions in the state – this championship was its fourth, coming in its 11th appearance in a title game. The Tigers finished 27-1 overall and are a combined 49-5 over Johnson’s first two seasons. The expectations surely will grow over his next two – he’ll eventually choose from a number of opportunities to play college basketball at the Division I level and also is a tremendous student, posting a 4.0 grade-point average last semester and carrying a 3.8 currently this spring.

Coach Corey Sterling said: “Carlos worked on his game. As a freshman at the Breslin last year, a 14-year-old, skinny kid, to now – he dedicated his offseason to work. He’s jumping better, he’s shooting well, he’s dribbling better, he’s getting tons of Division I offers and interest. He’s playing with a great AAU team. Carlos will be a pro. He’s our star. He’s our Division I player. And he’ll be better next year too. After this, we’re going to give it a week, and he’ll be right back in the gym.”

Performance Point: “Since (Friday) night I’ve been thinking about it,” Johnson said Saturday evening. “I came into the hotel room, took a shower and went to sleep. I woke up this morning around 7 o’clock. I was talking to one of my teammates, just talking about it all morning. It was a dream come true. It got my heart beating all day. Oh my gosh, we won. It just came true. … To bring one back to Benton Harbor, it’s been like 50-some years. When I was in sixth grade, all the way through eighth grade and as a freshman … we’ve had this goal since fourth grade. It’s a dream come true. It’s reality.” 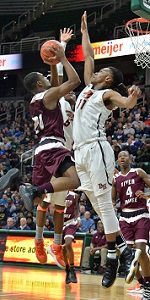 If this was a year ago: “I probably wouldn’t have made (the winning shot). I worked on my jumpshot this summer. My IQ and my dribble moves (have improved), and more of my footwork came through in this game. Two years to go, (I’ll) just keep working hard and get college material and try to bring another one back.”

Win for all: “As we all know, Benton Harbor’s been going through deep depression-like, so for us to bring one back, it just brings light and enjoyment all the way back to the house.”

Ready for more: “Next year I’ll have to take a guard role. We have a lot of bigs coming in, but I’m going to get comfortable with that. I think I’m going to play a big role (in leading) the next season that’s coming up. The challenge is getting everybody on one page and everybody to work hard and stay focused the whole time.”

Everybody’s watching: “I’ve been handling it since last year. It’s been a lot of pressure. A lot of people are reaching out to me. But I’ve got good coaches and good family member and friends, and they just help me to stay calm.”

PHOTOS: (Top) Benton Harbor's Carlos Johnson launches the game-winning 3-pointer during overtime of Saturday's Class B Final. (Middle) Johnson (11) gets a hand up as a River Rouge player drives to the basket during Friday's Semifinal.