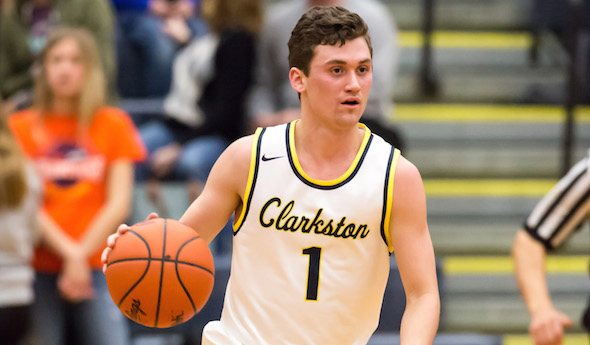 The Wolves’ junior point guard has been making good on high expectations since entering high school, and in one way he didn’t miss for nearly a year. Starting with last season’s regular-season finale against West Bloomfield, Loyer put together an MHSAA record streak of 119 straight made free throws to earn the Michigan Army National Guard “Performance of the Week” for Jan. 23-29.

Loyer’s streak came to an end when he missed his first free throw in a 59-39 win over North Farmington on Jan. 24. His record surpassed by 17 the former milestone set by Frankenmuth’s Brad Redford during the 2007-08 season and will rank second in the national record book when submitted after this season. Loyer joined the Clarkston varsity as a highly-touted freshmen two years ago and this winter has led the Wolves to a 13-0 start averaging 25.2 points, six assists and 4.4 rebounds per game, making 44 percent of his 3-point attempts and 95.6 percent of his tries from the free throw line.

Some of the high expectations for Loyer rise from legacy; his dad John has been an assistant for four NBA teams including the Detroit Pistons, whom he led as interim head coach at the end of the 2013-14 season. Foster also has learned under the tutelage of longtime Clarkston coach Dan Fife, who took over the program in 1983 and is the fourth-winningest in MHSAA boys hoops history. Loyer – who also played baseball for a season at Clarkston – has committed to sign this fall with Michigan State University. A strong student as well, he’s looking to study business management with an eye on working in sports once his playing days are done. But first, he’ll try to lead Clarkston its first MHSAA championship after the team fell in overtime in a Class A Regional Semifinal last season to eventual semifinalist Macomb Dakota, and also by two in 2015 in a Quarterfinal to Detroit U-D Jesuit.

Coach Dan Fife said: “He shoots every day, and when he shoots, he shoots with a purpose. He’s a hard worker, he puts a lot of time in, and all the time he puts in really shows in the way he plays. … His court IQ is just incredible. He sees the game ahead of time. He has a great floor sense, where people are. As a freshman he was the same way, and one of the bigger things is when he gets upset, he doesn’t show a lot of anger when he makes a mistake. Mistakes don’t lead to two mistakes with him. He doesn’t get caught up in that stuff, he doesn’t get caught up in who he is; he just keeps his focus. And as good a player as he is, he’s just as good a kid. In the hallways, you wouldn’t know (he’s a basketball standout); he doesn’t walk like that. He’s just one of the kids.”

Performance Point: “Going into this year, I knew I’d made a bunch in a row but I had no idea what number I was at,” Loyer said of his free throws. “I didn’t pay much attention, but I think when I passed 100 some of my teammates started messing with me, letting me hear it when I missed one in practice. … I approach every free throw the same, and when the shot (that broke the streak) left my hand, I had no thought going through my mind that it wasn’t going to go in. It rolled in and out pretty bad, and when it came off the front of the rim, the thought definitely went through my head and I heard the rest of the crowd knew about it. They took a loud gasp, and that’s pretty much how I felt about it. I was definitely disappointed, but when something like that comes to an end, you move on and go on to the next play.”

Part of the arsenal: “I would consider free throw shooting a serious weapon, especially being the point guard in an end-of-game situation. At the end of the game, being able to hit free throws, especially in high school where there’s no shot clock, the game is over in my mind. I’m confident in myself and my teammates to be able to go and knock free throws down. Just being in the gym every day, it’s something you practice every day, day in and day out. It’s called a free throw for a reason; in my mind, you’re supposed to make them.” 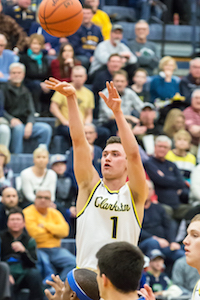 Thanks Dad: “If we’re watching film or being in the gym every day, my dad has been a positive influence in my life and basketball career. Just being able to take the things he says, and build off of them to make myself a better player. Every time we watch film, normally you should look not only at what you did right but also what you did wrong and can improve on. That’s been the biggest part of the game my dad has helped me improve.”

Win one for Coach: “(A Class A title) would mean the world to us guys as players, as a team, with the brotherhood we’ve built. But not only that, it would mean the world for us to win Coach Fife that state championship. Coach Fife doesn’t talk much about how much that means to him, but he’s had some difficult losses, and I think in the back of our minds it would solidify his legacy, solidify our legacy as a team, that we came in here and made our mark.”

Leading the way: “Day in and day out at practice, I pride myself in doing so, bringing leadership to the team, making sure guys are working as hard as they should be. As a leader and a point guard on a basketball team, you have to push guys not only to do what they should be doing, but it’s more than that. Going into March, we had a lot of guys in the locker room after (last season’s Regional loss), and we have a lot of guys who know what that feeling is like, and that’s a feeling we never want to go through again.”