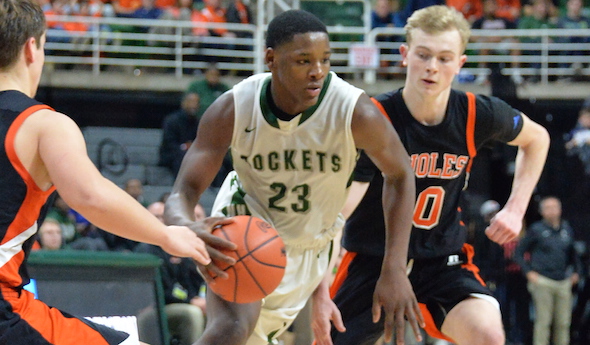 Weems, considered by many the top sophomore in Michigan, played a starring role as New Haven won its first MHSAA boys basketball championship Saturday, earning the Michigan Army National Guard “Performance of the Week” as the Rockets downed Benton Harbor 78-49 in the Semifinal and Ludington 45-36 in the Class B title game.

The 6-foot-6 sophomore forward averaged 17.9 points, 12.5 rebounds, and just under four assists, blocks and steals per game this winter in being named the Class B “Player of the Year” by The Associated Press. He had 14 points, 13 rebounds and five assists in the Semifinal win, and 19 points, 10 rebounds, four blocked shots and three steals in the Final as New Haven scored its fewest points this season but shined defensively.

The Rockets finished 27-1 thanks not just to Weems, but also star senior Eric Williams, Jr., and a strong supporting cast. Last week’s Semifinal also was the first in program history, but Weems has plans to add to the legacy over the next two seasons before likely having his choice of major college programs for which to continue his career. He's also a standout football player, quarterbacking New Haven to a share of the Macomb Area Conference Bronze title in the fall.

Coach Tedaro France II said: “Because he’s unselfish, that’s why we’re the Class B state champions. He gets his teammates involved. He can play the one through five; he does so much for us. He makes each person around him better. He can pass, he can defend, and one thing about him is he can score, but he takes pride in playing defense.”

Performance Point: “We went to our man-to-man press trapping, and they called a timeout because they didn’t know what to do,” Weems said. “I got long, started giving everything I had left. Got scrappy, started rebounding more, got more aggressive. ... I think we just had to step up big, get our teammates ready to play, get people’s nerves out get everybody going. We had to play big."

Getting defensive: “I hate to lose. The object of the game is to score more points to win. If I stop them from scoring, I win. I don’t like people scoring. It’s my paint, so I try to get every blocked shot, every rebound, play my heart out.”

Williams showed the way: “Just teaching the little things. Like on the court, if I miss a free throw, he lets me know if it looked good or if I need to get it up higher. Stay low when I’m jumping, a lot of stuff like that.”

All together: “I like to get my teammates involved. One person can’t win all by himself. I can be off, and I need my teammates to be on, and they get me going. So I get them involved, I get involved, and me and E, it’s hard to stop us when we're on fire.”