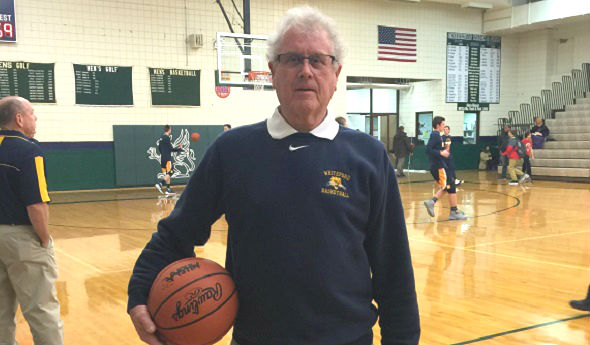 John Rice thought he found the perfect match for his two passions in life – fishing and basketball. By day, he could spend hours fishing off the Florida coast. When the afternoon rolled around, he would hit the gymnasium to coach basketball.

“I would have been perfectly satisfied doing that this winter,” Rice said.

That is, until Rice’s seventh-grade granddaughter Emma called.

“It was last March and we were in Florida and she was back home in Ottawa Lake,” Rice recalls. “She calls me up and says, ‘Grandpa, my team has a tournament that we are playing in and I want you to come watch me. And, I want you to coach my team next year.’”

Rice hung up the phone and told his wife, Sandy, they were headed home.

“We packed our stuff and went home,” Rice said. “It was a couple of weeks earlier than we had planned, but we got home in time for her tournament.”

A couple weeks later, after he agreed to become the seventh-grade girls basketball coach at Whiteford for the 2015-16 season, Bobcat varsity boys coach Jim Ross resigned. Athletic Director Nate Gust – who played for Rice when he was coaching at Whiteford in the early 2000s, asked Rice if he was interested in the varsity job. He decided to take it and is back at the helm of the Bobcats this season – 13 after ending his 30-year coaching career at Whiteford.

“Coaching basketball is something I love to do and, health-wise, I think it keeps me young,” said Rice, who celebrated his 70th birthday last summer. “I still love the game. When Emma asked me to coach her team, I couldn’t say no.”

Rice also couldn’t say no to coaching the varsity boys and helping to return the team to prominence. Whiteford went an uncharacteristic 4-17 in 2014-15 but is off to a 6-4 start under Rice.

“It’s a challenge, but I love challenges,” Rice said. “I enjoyed my time at Whiteford before, and I’m enjoying it now.”

This is his second stint as the head coach of Whiteford, having coached the Bobcats from 1974 to 2003, when he amassed 400 wins and collected eight District and eight league championships.

“The big thing was just getting acclimated to the kids here,” said Rice during a break in practice recently. “Being away so long, I was not able to follow these kids as they progressed through junior high or junior varsity basketball. I had to get to know them, and they have to get to know me. They’ve responded well, but we are still getting to know one another.”

Rice grew up in Bladensburg, Ohio, where he was an honorable mention all-state guard in Ohio’s smallest division in 1961. He was a factory worker, then college student who got his first varsity coaching job in 1969 at Dansville (Ohio) High School. He spent two years there, moved on to Mount Vernon Bible College – known now as Mount Vernon Nazarene – before moving north into Michigan.

He made Whiteford his home – especially the gymnasium just off exit 3 of US-23. His Bobcats won their first District title in his third year and their first Tri-County Conference title in his seventh. By the early 1980s, Rice had a Class D powerhouse. His 1981-82 team went 21-2, and he was named the Class D Coach of the Year by The Associated Press. His Bobcats won five league titles and four District crowns alone during the 1980s. He’s also had a good run of coaching all-state players – no fewer than six Bobcats that he coached earned first or second-team all-state honors.

Rice coached the Bobcats through the 2002-03 season, which happened to be the best in school history. Whiteford won its first 23 games, finished 23-1 and ended the season ranked among the top Class C teams in the state. Soon after the season ended, Rice resigned with 410 wins at Whiteford.

“I just felt the time was right for me to step aside and let someone else coach,” Rice said. “It was time. I felt good about what I had accomplished, and I was leaving the program in good shape. It was a good time.”

Just because Rice wasn’t at Whiteford, however, didn’t mean the coaching bug left him. In the dozen seasons since, he’s coached 11 of them. That includes varsity stints at Ann Arbor Gabriel Richard, Flat Rock and Toledo Bowsher. He’s been the junior varsity head coach at Toledo Woodward, the JV coach at Sylvania Southview and a varsity assistant at Lake Worth Christian in Boynton Beach, Fla., about 45 minutes north of Fort Lauderdale on Florida’s east coast. The only time Rice didn’t coach was one season during which he had back surgery.

“I started the season as an assistant, but decided to focus on my health,” he said. “I went to a specialist and found I needed surgery. Every other year, I’ve coached in some capacity. I’ve coached with a lot of different guys and observed lots of different styles.”

His return to Whiteford has kept him busy. He is officially head coach of both Bobcats middle school girls teams and the varsity boys. Some days, he has practices from 3 p.m. until 7 p.m. He also stops by the girls varsity practice when he can, which itself is nothing new. In addition to all of his years with the Bobcats boys program, he coached the Whiteford JV girls for 32 seasons and the varsity girls for three.

“I’ll practice four straight hours some days,” he said. “It’s a tough transition going from seventh-grade girls to varsity boys. You have to adjust your voice.”

In the first half of the season, the Bobcats have beaten arch-rival Summerfield in overtime, beaten Blissfield and have already passed last season’s team win total despite starting the season with just three seniors and a host of underclassmen – including five sophomores – on the roster.

“One of my philosophies has always been to bring up the underclassmen and build the team that way,” Rice said. “It has worked out very well for my teams at Whiteford and at other schools. When the younger kids get experience, it usually pays off in the end.”

He also has continued his typical high-tempo offense with pressing and trapping on defense.

“That’s the type of basketball that I like to play,” he said. “I haven’t changed my philosophy much. You have to adapt from year-to-year, depending on the kids you have, but the philosophy stays the same.”

Rice’s return has been welcomed by the community, especially several of his former players who have stopped by the old gym to catch five minutes of the practices they remember so well or to just say hi before a game. A lot of former players have left comments on Facebook, too. Among the players on his roster now are Cody and Jesse Kiefer. During his first stint at Whiteford, Rice coached both the Kiefers’ parents.

“I’m having fun,” Rice said. “I’m comfortable here. I feel back at home. This has energized me.”

Rice by the numbers