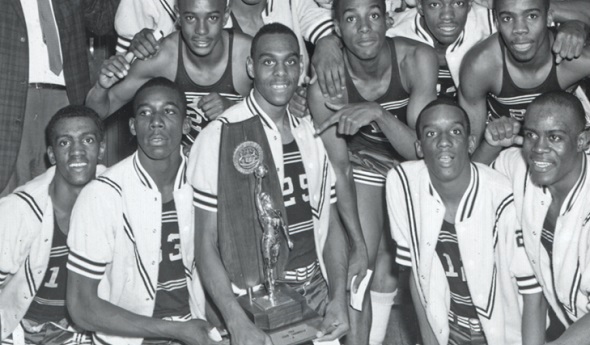 One of the captains from the legendary boys basketball teams of the early 1960s at River Rouge passed away earlier this month.

Ken Wilburn, 72, a forward on the 1961 and 1962 teams that were part of a since-unequaled streak in Michigan high school basketball – five consecutive MHSAA championships – accomplished what was thought to be the first triple-double in Finals history in the 1962 Class B championship game against East Grand Rapids.

Wilburn would go on to lead Central State University (Ohio) to a 30-0 record and the NAIA national championship in 1965, when he was named the title game’s Most Valuable Player. He earned All-America honors and finished his career as the school’s scoring leader.

During a 13-year journeyman professional career, Wilburn played in the NBA, the ABA and in the Eastern Pennsylvania Basketball League/Eastern Basketball Association.  He played on three championship teams in the EPBL/EBA and was a league MVP on two occasions.

PHOTOS: (Top) Ken Wilburn (25) poses with his teammates after the 1962 Class B championship game victory. (Middle) Wilburn works to gather a loose ball from an East Grand Rapids player.