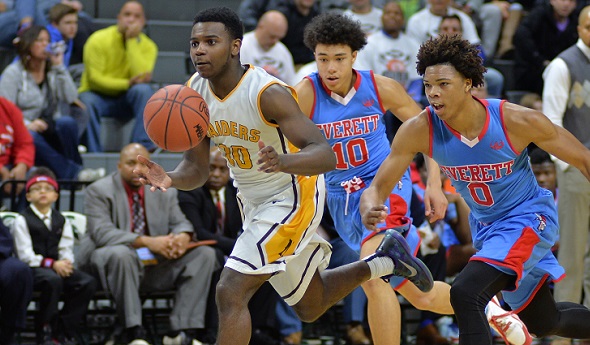 FARMINGTON HILLS – No matter the role or circumstances, Amauri Hardy finds a way to fit in.

Hardy, a 6-foot-1 senior guard from North Farmington, has been a starter since his freshman year and is one of the state’s top players. But his journey has not always been smooth.

He averaged 10 points per game his freshman season at Southfield High, then missed all but four games his sophomore season after suffering a strained knee ligament. The injury sidelined Hardy for four months, and in October of his junior year he transferred to North Farmington.

Known as a shoot first, pass second type of player, Hardy would have to change his style to fit into an experienced team that was not short on talent and players who could score.

“I didn’t have to score,” Hardy said. “We had more talent than when I played at Southfield. I had to swallow my ego. It’s something I had to do. (The North Farmington players) knew my game. I knew theirs.

“I was a combo guard last year. I tried to do what was needed. I shared things with Billy (Thomas).”

Hardy and Thomas, a senior last season, teamed to form one of the state’s top backcourts. And their ability to mesh didn’t happen by accident. The two had been friends since elementary school. When they entered high school each went his separate way, but reunited last winter their play (Hardy averaged 22 points ppg; Thomas 18) was instrumental in the Raiders’ run to the school’s first Class A Final appearance.

“We had a great talk when he came to us,” North Farmington coach Todd Negoshian said. “We talked about his goals, where he wanted to get. He didn’t want special treatment. To this day he’s always asking questions. He’s not questioning what we do. He just wants to get better. He really listened, watched and learned.”

Hardy said every day he thinks about what he and his teammates accomplished last season. Their 55-48 victory over host Orchard Lake St. Mary’s in a District Final was a big hurdle on their way to the Breslin Center.

As talented and balanced a team as North Farmington was last season, this season’s has little experience. Hardy is the lone starter returning and the Raiders have been inconsistent, a trait many young teams confront.

Once again Hardy had to switch gears. In order for his team to be competitive, and as successful as possible, he’s had to assert himself more offensively and be the leader. Hardy is averaging 28.5 points and seven assists per game from the point guard spot, but in most games it hasn’t been enough. What makes those numbers even more impressive is that North Farmington averages just 55 points per game.

North Farmington (4-7) did defeat Southfield Arts & Technology, 76-70, on Jan. 26 for its first victory in the Oakland Activities Association Red. Hardy scored 35 points and had help this time as the other starting senior, Karl Patrick, had 19.

Overall, the Raiders have had a difficult time competing for 32 minutes. In some games they play well for three quarters, then run out of steam leaving Hardy to do much of the heavy lifting. He scored his team’s first 15 points in a 63-58 overtime loss to West Bloomfield on Jan. 20. Hardy finished with a career-high 46.

“I give him credit, the way he leads our guys,” Negoshian said. “He’s toughed through it.

“That’s what I like about him. He’s become a leader. Jacob Joubert and Alex Darden were our leaders last year. He watched and learned.”

Hardy does more than watch. He dedicated himself to the weight room in the offseason and has become a much stronger player, particularly when he goes to the basket. He’s able to ward off defenders more effectively and exhibits great body control.

And it doesn’t hurt that he’s left-handed and gives opponents a less familiar look as they try to lock him down.

Hardy was one of two players from Michigan (along with Jamal Cain of Detroit Cornerstone Health & Technology) and 64 finalists nationally for the McDonald’s All America team (no Michigan players were among 24 eventually chosen). Hardy also has signed with Oklahoma State University and is a possible candidate for the 2017 Mr. Basketball Award.

But on the way to those future opportunities, he’s filling the necessary roles as North Farmington works to elevate from its slow start.

“He’s a great teammate,” Negoshian said. “He cares about the team and the program.”