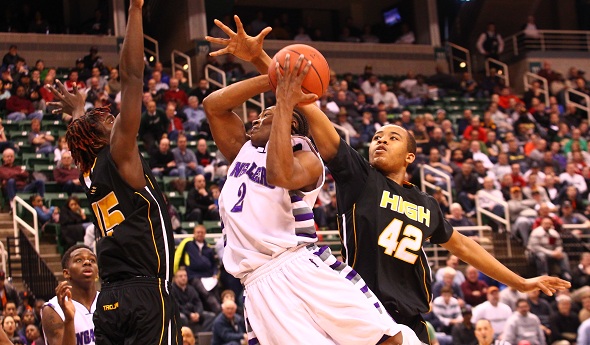 EAST LANSING – Jovone Haynes saw a “weakness,” went after it, and Detroit Southeastern will play Saturday for the MHSAA Class A title.

Simple as that … and not at all.

With his team and reigning champion Saginaw tied and a minute to play in Thursday’s Semifinal, the Jungaleers senior made a steal at halfcourt and found teammate Leonard Harper-Baker for a go-ahead layup on the way to a 51-45 victory.

Four of the Jungaleers’ losses this season – including their 57-56 defeat to Saginaw in December – came down to the game’s final possession. Haynes wouldn’t let this one get to that point.

“I saw he had the ball over his head. I just went at it,” said Haynes of his gutsy last-minute swipe. “I was just confident I could steal the ball.” 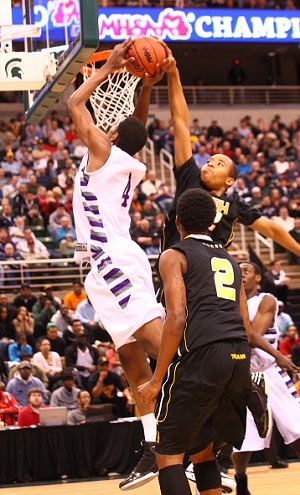 But there’s much more to explain why he and his teammates moved on.

Detroit Southeastern (21-5) will face top-ranked Romulus for the Class A title at noon Saturday. Romulus is playing for its first championship since 1986; Southeastern for its first since 1926 and after finishing runner-up in 2011.

The Jungaleers probably weren’t the Detroit Public School League team expected to reach Breslin Center this winter – not with Detroit Pershing and Cass Tech ranked in Class A and Douglass ranked in Class B.

But Southeastern, an honorable mention in the final poll, benefited from facing them all and despite losing to two of the three.

Haynes and senior Kenyatta Singleton didn’t play in that first Saginaw game, but combined for 19 points, 10 rebounds and eight steals Friday. And they brought security to Southeastern’s offensive attack that was missing in the first matchup; the Jungaleers had only 12 turnovers this time.

“You’re not going to win a state championship in December or January, not in basketball. Us losing (those) four games, who cares?” Southeastern coach George Ward, Jr., said.

“We knew when we got these two on the floor, defensively or offensively, we could make something happen.”

For the first 31 minutes, the teams played to a stalemate. Although the Jungaleers jumped to an 8-0 lead off the opening tip, the margin was never more than four points over the 20 minutes prior to final minute, when Southeastern finished on a 6-0 run.

“They got us sleeping, forced a clean turnover,” Saginaw coach Julian Taylor said. “My guy took his eye off, he was trying to pay attention to the ref, and (Haynes) smacked it out of his hand. Then we had to play from behind, and we made another turnover.”

Junior forward Daryl Bigham led the Jungaleers with 14 points and six rebounds, and Haynes had 13 points.

The Trojans entered the postseason ranked No. 6 and finished 23-4.

“It’s just a blessing to be in this position. They fought hard to earn their respect,” said Taylor of his players. “I love all of these guys. They worked their tails off for us. I’m on them to stay humble and stay focused, and I believe they did that. They’ve got nothing to hang their heads for.”