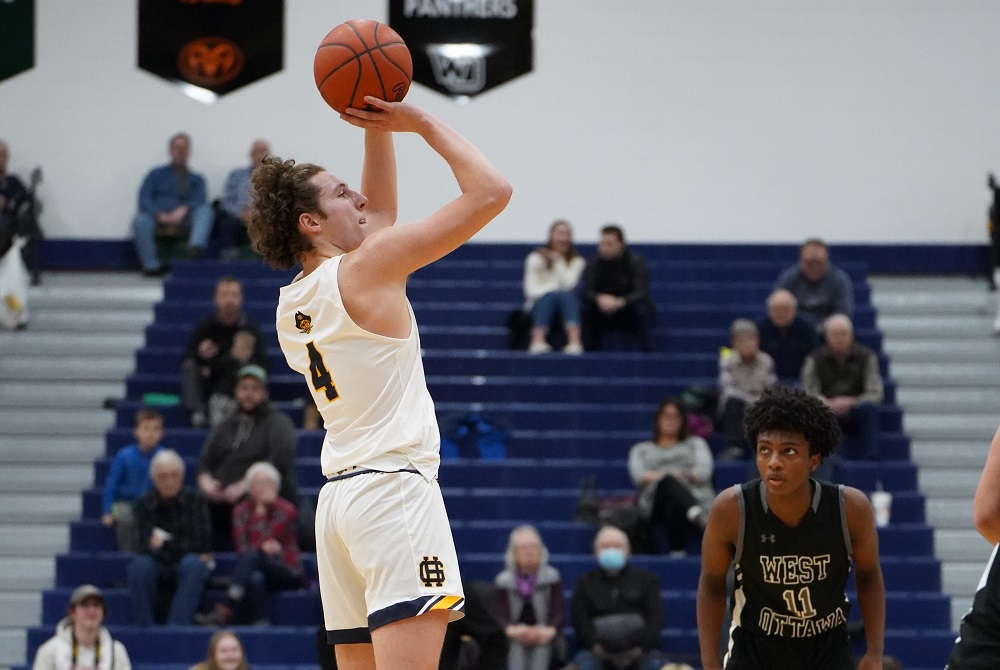 “I know we play Rockford again coming up, but honestly, I don’t know exactly when it is – but I know it’s coming up soon,” said Stump, referring to Grand Haven’s highly-anticipated rematch with Rockford, which handed Haven its only loss of the season back on Jan. 18.

That answer was music to the ears of seventh-year Grand Haven coach Greg Immink, who knows his team still needs to get past Caledonia in order to make the Rockford rematch (which is Feb. 15 at Rockford, by the way) an opportunity to move to the top of the Ottawa-Kent Conference Red standings.

Grand Haven, which improved to 13-1 overall and 8-1 in the conference with Tuesday’s 63-42 home win over Holland West Ottawa, has the town buzzing – and the student section and pep band are having a blast just like in the glory days of Buccaneers basketball.

Haven’s rematch with Rockford is just one of the upcoming games those rabid fans are excited about – along with a chance to repeat as a Division 1 District champ next month.

The Bucs are certainly an experienced team, with four senior starters, led by the 6-foot-5 Stump, who scored a game-high 24 points in Friday’s 59-46 win over Hudsonville.

“We have been playing together for so long, and we still don’t know who is going to be the leading scorer every game,” explained Stump, an honorable mention Associated Press all-state selection last winter. “We just try to keep moving the ball and if someone gets hot, we’ll find him and go to him.”

Stump was that man Friday, posting up and scoring down low, finishing up on the break and displaying a rapidly-improving, mid-range jump shot.

While Stump doesn’t lead the Bucs in any one stat, he entered this week ranked second in five of the six major statistical categories – scoring (13.0), rebounding (5.4), shooting percentage (48.8 percent), steals (1.3) and blocked shots (1.1).

“In the last three or four games, Nic has raised his game to a higher level,” said Immink, who is assisted by Ron Peters and Lance Johnson. “I’m excited about that because when he’s playing well, it opens everything up for the rest of the team.”

Bashir Neely, an athletic 6-2 senior, uses his speed to break down defenses and is the leading scorer at 16.5 points per game. He is joined in the backcourt by 6-5 junior Harrison Sorrelle, the only non-senior starter, who averages 11.1 points and 2.6 assists. Sorrelle, like Stump, was an honorable mention all-state choice last year as a sophomore. 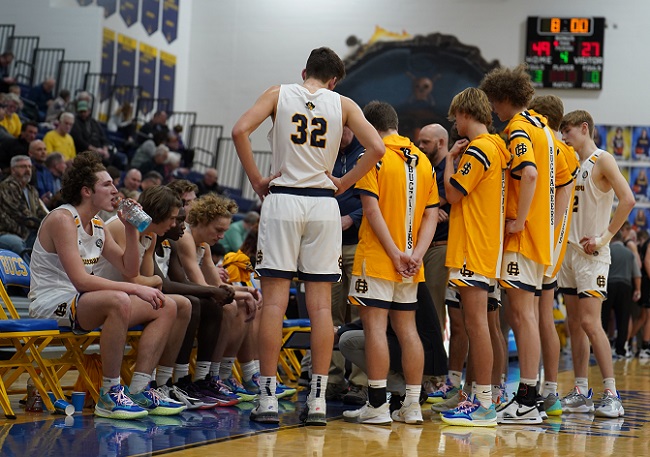 Joining Stump on the front line are 6-6 senior center Tucker Kooi, who averages 7.2 points and leads the team in rebounding (5.7) and blocked shots (1.7), and 6-4 senior forward Owen Worthington (7.3 points), who is an outstanding 3-point shooter and defender.

Stump said the fact that most of the team has been playing together since their elementary Bucs Youth Basketball days is a huge advantage – especially in close games. One player he has been playing with even longer than that is his younger brother Nate Stump, a 6-3 junior and one of the first players off the bench every game.

“I love having this chance to play with him,” said Nic Stump. “We are typical brothers and we fight and get on each other’s nerves and all of that, but it’s mostly just brotherly love. We help each other out all the time with shooting form and rebounding and things like that.”

Nate Stump averages 2.5 points in limited minutes but has given the team a huge boost with his rebounding, currently third on the team at 4.6 per game.

Grand Haven’s basketball tradition dates to the 1920s and legendary coach Gus Cohrs, who guided the Buccaneers to a staggering six MHSAA state championships over a nine-year period from 1927 to 1935.

That basketball passion was reignited by Al Schaffer, who guided Haven to 231 wins during his 18 years in the 1970s and 1980s. Craig Taylor then steered the Bucs to back-to-back Quarterfinal appearances in 1991 and 1992, but it would be another 18 years before they would make a run that deep again, in 2010 under Steve Hewitt.

Hewitt died tragically during the summer of 2014, and after Bob Eidson took the reins for one year, Immink has guided the Bucs the past seven.

For the first four years of Immink’s tenure, Haven’s postseasons ended at the hands of powerhouse Muskegon in the District Finals. In 2020, the two teams were again scheduled to play in a District Final, but the COVID pandemic wiped out the season the day before that game. Then last winter, Haven broke through and downed the Big Reds, 66-51, snapping Muskegon’s run of 16 straight District titles.

The two teams are on a collision course once again as Muskegon was undefeated before suffering its first loss Saturday against Ferndale.

Muskegon is known for its speed, athletic ability and lockdown defense, while Haven counters with its shooting, experience and length. Neely is the Bucs’ only starter under 6-4.

“Our guys believe in our system, and we’re excited for a lot of big games coming up,” said Immink. “The challenge for us is to play consistently at a high level and for them to go beyond what they think they can do.”

PHOTOS (Top) Grand Haven’t Nik Stump attempts a free throw during Tuesday’s win over Holland West Ottawa. (Middle) Stump and his teammates get a breather during a break in the 63-42 victory. (Photos by JWaltVisuals.)