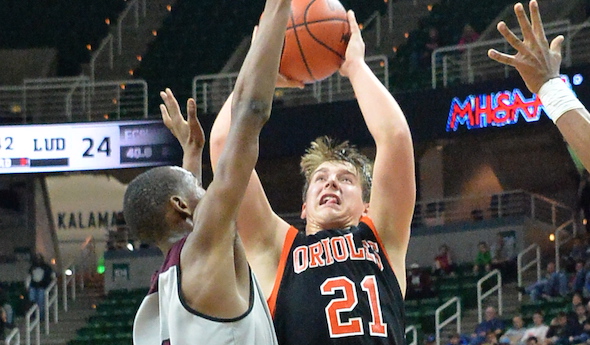 EAST LANSING – If older brother is right, Joshua Laman might not remember much of the aftermath of his first 3-pointer this season.

But it’s a shot Ludington – and probably River Rouge – will never forget.

Laman, a sophomore center, had missed all nine of his tries behind the arc entering Friday’s Class B Semifinal. But as the seconds ticked down in overtime, Orioles senior and older brother Noah Laman had the instinct to pass to Joshua stationed in the left corner.

What he tossed up was something of a right shoulder heave, a little like a shot put. But as the final second clicked off the clock, Joshua Laman’s 3-pointer dropped through the net, sending Ludington to its first Class B championship game since 1953 with a 51-50 win over River Rouge.

“I don’t even know if he is thinking right now,” Noah Laman said a few minutes later from the postgame press conference. “I don’t think words can describe what’s going through any of our heads right now."

“He’s thinking that when I get back in that locker room,” Ludington coach Thad Shank added, “he’s going to look Coach Shank in the eye and say, ‘Told you coach I should be shooting these 3s all year long.’ I know that’s what he’s thinking.”

Ludington (25-2) will take on New Haven at 6:30 p.m. Saturday in the season’s final game at the Breslin Center. The Orioles have never won an MHSAA boys basketball title, falling to St. Joseph 60-51 in that lone appearance more than 60 years ago.

This was their first Semifinal since 1971, and they weren’t going to let the opportunity slip by even if they were perceived to be a slight underdog ranked No. 8 heading into the postseason while River Rouge came in No. 2.

It looked for most of the game like the poll was accurate. Although Ludington put together a few runs to keep the game knotted midway through the third quarter, the Panthers (24-2) gradually opened up a lead that reached nine points with 1:48 to play in regulation.

That’s when the first set of heroics came into play. Senior guard and leading scorer Calvin Hackert made two 3-pointers and a free throw, and Noah Laman added the other bucket as the Orioles closed the fourth quarter on a 9-0 run to send the game to overtime.

River Rouge got up by five again midway through the extra period. But Ludington closed on a 7-1 run, with Joshua Laman’s winning shot coming after a Rouge turnover with 30 seconds to play and then two missed shots and offensive rebounds by the Orioles, who otherwise were outrebounded for the game 24-20. 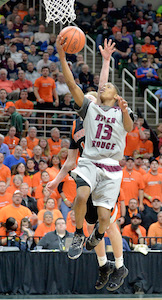 That turnover to set up the final possession was in addition to two more Panthers turnovers during the closing run of regulation. And Ludington pulled off the final charge after Hackert fouled out with his team still trailing by four.

“A couple times I told them hey, if on November 15 when we walked in this gym and we were down four or five points in the state Semifinal to River Rouge, would you take it?” Shank said. “We’ve gotta keep our heads up, and we’ve gotta keep fighting here.

“We are a pressure defensive team, and we have a lot of respect for Rouge and their quickness, and we haven’t played a team with that level of quickness to this point. So we didn’t really aggressively go after River Rouge like we do most teams. But the fact that that’s part of our package I think was huge down the stretch of the game, that that’s what we’re comfortable doing. It wasn’t something we were just throwing out, full court pressure that we’d never used before.”

River Rouge coach Mark White – who previously led Detroit Renaissance to Class A titles in 2004 and 2006 – could sense Ludington was working toward a dramatic end.

He said it was his Panthers’ worst game this season – and obviously the worst time for it. But how Ludington pulled off its last-second success wasn’t lost on him.

“Well, luck is something that’s created. We got a defensive stop, and we teach and emphasize that defense isn’t over until we get the rebound,” White said. “And we didn’t finish the defensive possession. We got them to miss a couple shots, and there were a couple loose balls. It went down to that determination factor, and Ludington wanted it, by their behavior, more than we did … and again, when you give as much as they did, the basketball gods are on your side because you deserve and that happens in March.”

Hackert led Ludington with 20 points, and Joshua Laman had 11. Also worth noting, junior center Will Sadler had seven points, making all three of his shots including his only 3-pointer this winter as well.

Laman’s final shot led to a pile of Orioles players in Breslin’s southwest corner, right in front of a sea of orange-clad fans taking up nearly three full sections of the lower bowl.

“We can tell how big a deal it is just by the support of the community,” Hackert said. “The crowd was electric tonight, and it shows how much they revolve around us and really support us. And to be playing in the state championship, it’s just awesome. I can’t even explain it.”

PHOTOS: (Top) Ludington’s Calvin Hackert puts up a shot as a River Rouge defender works to block his path. (Middle) Rouge’s Darian Owens-White goes up for a layup on the way to scoring 19 points.