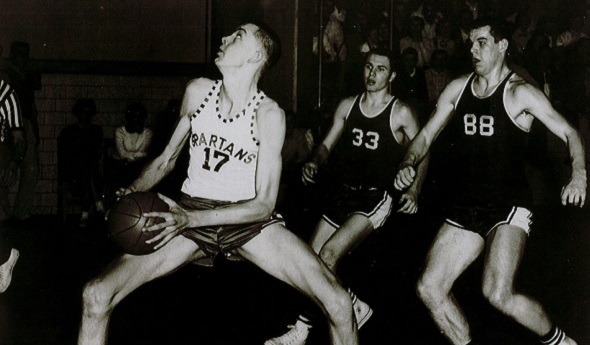 In 1956, Battle Creek Lakeview center Bob “Sticks” Bolton scored 50 points in a Quarterfinal against Kalamazoo State High School. His points remain the most scored during the final round of the tournament – Quarterfinal-Semifinal-Final.

What follows are edited excerpts from a piece in the MHSAA archives written by former Battle Creek Enquirer reporter Allen Palmeri:

The date was March 21, 1956, and seating capacity in the Hastings High School gymnasium had been expanded to 2,000 this Wednesday night in anticipation of a marvelous Class B Quarterfinal basketball game between two sizzling teams.

The bleachers weren’t sufficient. About 2,500 fans were able to shoehorn their way in, ringing the court and leaving others in the school’s hallways and out on the sidewalk as one of the most spectacular individual efforts in MHSAA Boys Basketball Tournament history was about to unfold.

In one corner was Lakeview center Bob “Sticks” Bolton, a 6-9 rod of fury. In the other corner was State High’s mountain range of a front line, with peaks standing 6-6, 6-6 and 6-5.

“We looked forward to the game with quite confidence, because we really respected them for the tremendous team they had,” Bolton recalled in 1996. “We knew it was going to be a battle royale because of their size.”

The game within a game of one-on-three was no contest as Bolton simply pulverized the peaks. He poured in 50 points in a 90-73 Lakeview victory, setting a final round record for single game scoring that has withstood decades of assaults by the likes of Ralph Simpson, Spencer Haywood, Earvin Johnson, Jay and Sam Vincent, Antoine Joubert, Jay Smith, Mark Brown and Chris Webber.

(He scored) 12, 20, 10 and 8 points through four quarters against State High. He was particularly impressive in the second quarter, when he wound up scoring 20 of his team’s 21 points. Overall, he sank 17 of 27 shots from the field and 16 of 20 from the free throw line.

Though State High took the brunt of Bolton’s blows during the tournament, his effort throughout Lakeview’s run was just as spectacular. ... When Marshall tried to stall away the district opener, Bolton had to settle for 18 points in 40-20 victory. In an 80-58 win over Albion for the district championship, he punched in with a 34-point effort.

In carrying Lakeview to its first regional title, Bolton went ballistic, pumping in 42 points against Three Rivers and a school-record 46 points against an East Lansing team coached by Gus Ganakas. He then went out and topped that in the quarterfinal.

In the semifinals two days later, Bolton was whistled to the sideline with 25 points with a little over half the game played, fouling out in a 74-69 loss to eventual champion Stephenson. Opposing center Mel Peterson, who went on to play for Wheaton College and the NBA’s Baltimore Bullets, had scored 21 points when Bolton fouled out.

Though the memory of that game is painful, he fondly recalls his five-game scoring spree as “lifting my game to a higher level as the competition got tougher and tougher. Praise the Lord for that!”

Bolton went on to play collegiately at Western Michigan University, where he cracked the 1,000-point barrier, set a school rebounding record and outscored future NBA Hall of Famer Nate Thurmond on two of three occasions. After his college career, in a semi-pro championship game, he managed to outplay another Hall of Fame center, Walt Bellamy.

But his passion for basketball was never the same after high school. His dedication, vigor and enthusiasm gradually shifted towards the ministry.

PHOTO: Bob "Sticks" Bolton dropped 46 points on East Lansing in a 1956 Class A Regional championship game. He followed that with a record 50 points in the Quarterfinal.