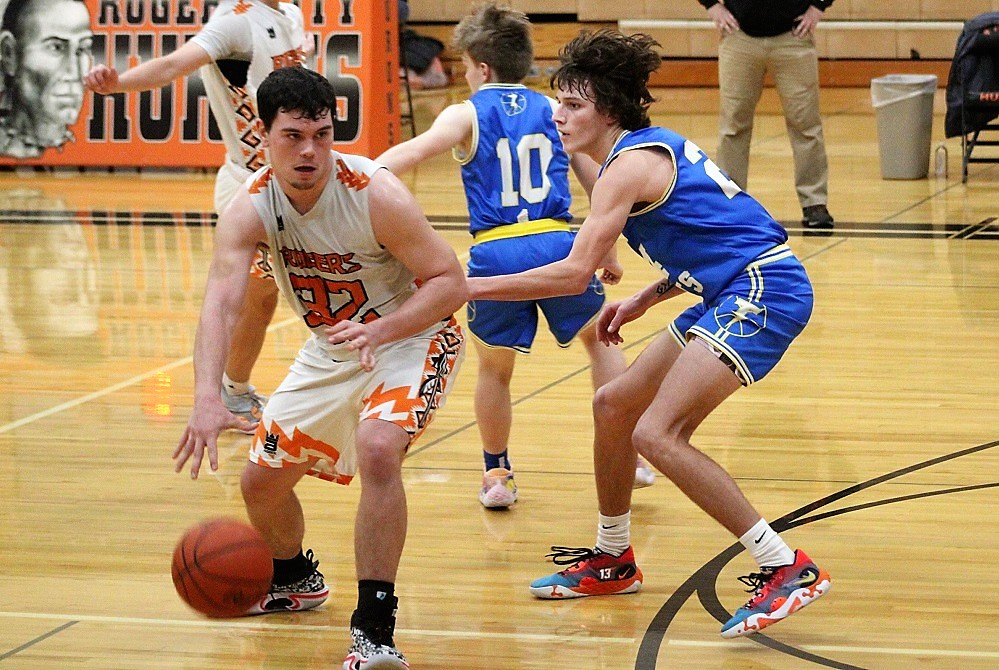 Wins, losses and championships may not be what this year’s Mio boys basketball players leave at the top of their footprint when they’re done.

But they certainly could.

“I’m proud to say these boys have gotten many compliments throughout the last couple of seasons as to how they conduct themselves and represent our basketball program, one another, our school, and our community both on — and off — the court,” said head coach Ty McGregor. “This group’s legacy will be more about their high character than records and titles.”

McGregor knows about leaving a legacy. He scored 56 points to lead the Thunderbolts to the 1989 Class D championship. His scoring in the 78-67 deciding win over Beal City allowed Mio to cap a perfect 28-0 season.

He also knows the legacy, perhaps better than most, of Michigan’s all-time boys career scoring leader, Jay Smith, who led Mio to the 1989 Semifinals and a 24-2 record. Smith and McGregor are brothers-in-law.

Smith, who set the bar while playing before the 3-point line was added to Michigan high school basketball, went on to play and coach at the college level.  Smith recently returned to the University of Michigan basketball program as the director of player personnel and development under Juwan Howard.

McGregor went on to play professionally in Europe and coach with Smith at Grand Valley State and Central Michigan. He also squeezed in two years coaching the Thunderbolts before the college coaching and returning to Mio in 2017.

They also have the Thunderbolts starting to think of capturing a conference title that has eluded them for 13 years.

“We only have 10 total boys in our high school basketball family, so it’s vital all lead and take ownership,” McGregor said. “Our kids show up in the classroom basketball court, so right there is 80 percent of being successful. 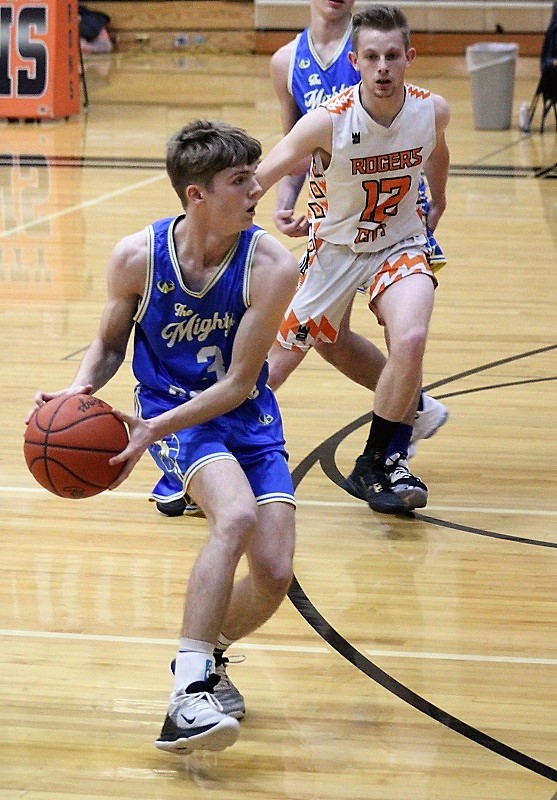 “We talk about ‘real-life stuff’ a ton, and a big part of what we’re about is always leaving places better than when we found them,” McGregor continued. “These three seniors will most definitely leave our program a better place when their time here is complete, which makes a highly competitive, overly intense, passionate coach like myself smile!”

Fox, averaging 16.4 points per game, Long at 12.4, and Hurst at 10, are the team’s leading scorers. Long leads the team in rebounding, and Fox tops the steal list.

Sophomore Zeke Morris is right behind the seniors in scoring, rebounding, and steals. Junior Hunter Perez leads the team in assists.

Any and all five Thunderbolts on the court at any moment can drive the team’s success, according to McGregor.

“I’ve stated all along, we don’t have a superstar or superstars; we do things by committee,” noted McGregor. “In order for us to be successful in any way, ‘by committee’ is how it has to be done.

“We have five players that on any given night can get us double-digit scoring,” he went on. “Austin Fox, Gage Long and Nathan Hurst clearly do a great job with leadership, but everyone has taken ownership of this team.”

Defending is the team’s top priority, McGregor is quick to point out. His team is currently holding opponents to just 25 points per game.

“We know there will be nights where we will really shoot it in and nights where we can’t throw it in the ocean,” he said. “That’s basketball, but we should never have off nights at the defensive end — that’s all about effort, focus.

“We are holding true to our priorities thus far,” he continued. “This type of defensive success widens our margin for error in other areas that we don’t have as much control over.”

The postseason is already on the minds of the Thunderbolts, McGregor acknowledged.

“The postseason is clearly the most important part of the season in our minds,” McGregor said. “We want to continue to hold each other accountable and make daily deposits on preparation, commitment, effort, and attitude, which we hope will pay dividends in March.”

Mio’s style of play may not turn heads, but McGregor believes it gets the job done. 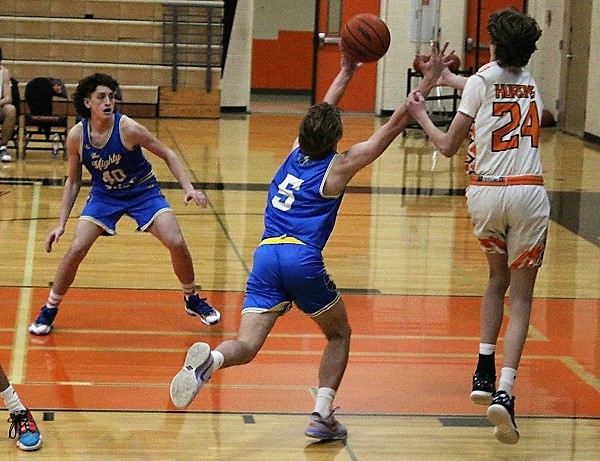 “Unfortunately for our kids and Bolt Nation, their head coach is very black-and-white — he’s not into ‘Top 10’ highlights,” McGregor said. “We play a very fundamental, disciplined style of hoops, doing our best to not over complicate things.

All of the girls who hoped to play last year still have eligibility – and could end up with the top seed in their District.

Coaching at the same school as his wife has been a spectacular experience, the boys coach said. And, it gives them something else to argue about, Ty McGregor joked.

“It is absolutely awesome to have the opportunity to teach the game of life, the game of hoops, and be a part of Bolt Nation alongside my wife, Kristi,” he said. “It gives us the opportunity to discuss, analyze, and assist one another, all in hopes of teaching kids in our small community to dream big, work hard, and commit to something bigger than themselves.”

The Thunderbolt boys, 7-0 overall and 2-0 in the Big Dipper portion of the North Star League, will resume play Tuesday at Posen.

“I don’t look at or take much stock in an unbeaten record this early in the season,” McGregor said. “We don’t even discuss it, as we are more concerned with our daily approach to be better than we were the day/game before.”

PHOTOS (Top) Mio’s Gage Long (24) defends during a 57-17 win over Rogers City on Tuesday. (Middle) Nathan Hurst (3) looks for an open teammate. (Below) Austin Fox (5) intercepts a pass into the lane. (Photos by Jessi Fox.) 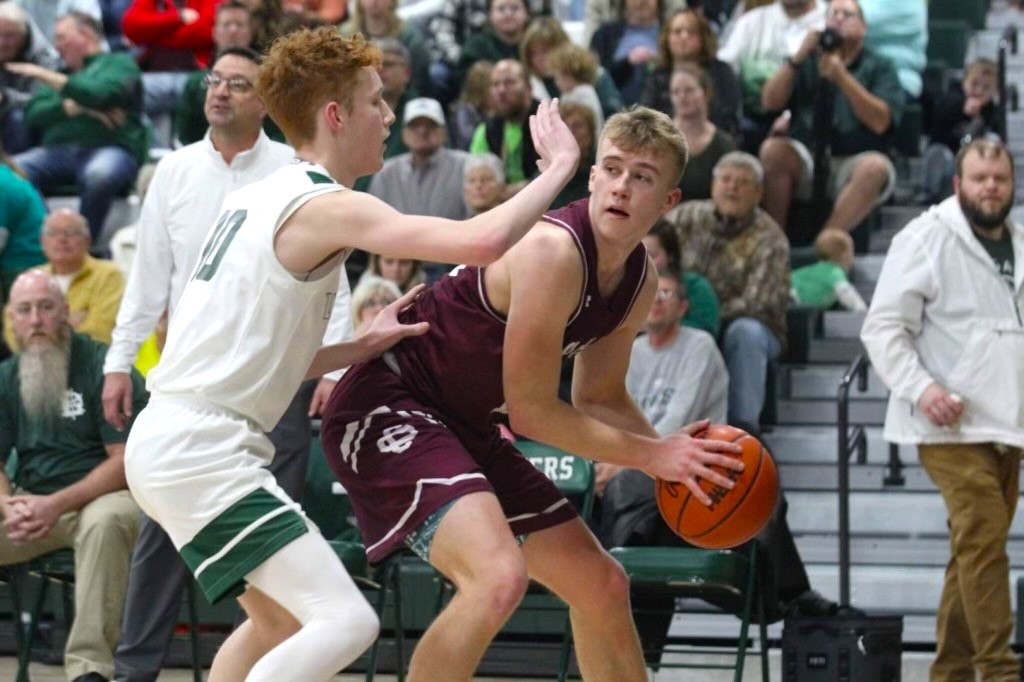 He’s happy that his players are finding ways to win games against solid competition.

But, with six of those wins having been decided during the final seconds, he wouldn’t mind if his team didn’t make it so stressful.

“I think the kids get more confident as you win those games, but as a coach, I don’t know if I get more confident,” Fernald said with a laugh. “We do practice situations, we get the clock out, and we’ve been doing that almost every week since the beginning of the season. But I really don’t have a great answer on all of it.”

There may not be an answer to why it’s happening, but the results are eye-opening.

It started Dec. 13, when junior Carter Patrick hit a 3-pointer with just under four seconds to play, giving the Red Hawks a 45-42 win against Millington.

Late 3s to win games are fun, and when they happen in December are typically a footnote to a season, and not the start of a trend. This, however, was the latter.

On Dec. 20, Patrick again scored the go-ahead points with a pair of free throws in the final seconds of a 55-54 win against Saginaw Nouvel.

Patrick struck again Jan. 4, hitting a go-ahead basket with five seconds to play in a 51-50 win against Saginaw Valley Lutheran. 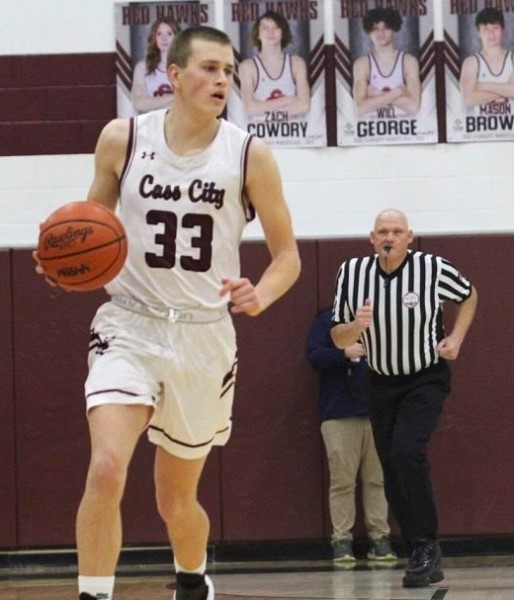 On Jan. 18, Mike Ferland hit a buzzer-beater after a save under the basket by Tyler Cumper in a 47-45 win against Caro.

Trent Patrick had the most dramatic one nine days later, on Jan. 27, when he hit a 3-pointer from just inside halfcourt to defeat Elkton-Pigeon-Bay Port Laker 44-43.

Then Feb. 1, Carter Patrick again hit a game-winner, this time on a backdoor cut in the final seconds of a 46-45 victory against Bad Axe.

“I like to think it’s really good, because we’re figuring out how to win in key moments,” Carter Patrick said. “But we need to start getting a lead so we don’t have this pressure in games. I do think it’s preparing us for (the postseason) a lot, actually. If we get the ball at the end of a game, any game, I think the other team might get nervous themselves knowing that we’ve done this.”

Whether or not that’s the case, it’s pretty clear that Cass City won’t be nervous.

“The first couple, I was really nervous down the stretch,” Michael Ferland said. “A lot of other teammates were, too. But I think we’ve all got a lot more comfortable in those situations.”

Having three players who have scored game-winning baskets is a luxury for Cass City. But it goes well beyond that.

“We’ve got a team that kind of keeps hanging around and making a play,” Aaron Ferland said. “To get a buzzer-beater, we’ve had other guys not mentioned much that made plays to get us to that point. It’s kind of been a team effort that’s come from a lot of different people.”

Coming into the season, Aaron Ferland admitted he didn’t think this team could get to this point. He did think there would be improvement from recent years, however, as there were some key players back including Carter Patrick and Michael Ferland, who were each entering their third year on the varsity team. 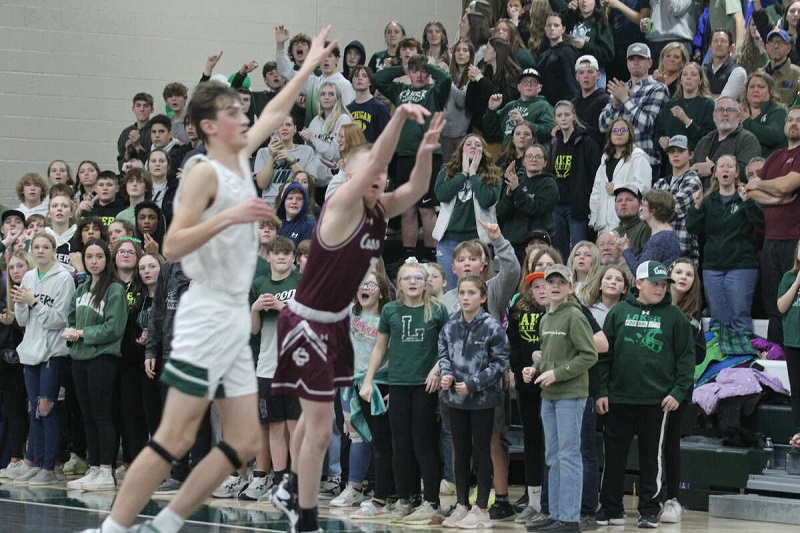 Both of them, however, did think special things were on the horizon.

“This summer, I did,” Patrick said. “We were at team camp, and I thought this would be a better year for us. We had a really good chemistry, and we got along. We have a lot more fun together.”

That chemistry has been built over the course of several years, as many of the Red Hawks’ players have been playing together since they were kids.

The trust built through that, Patrick said, has helped in those clutch moments.

“We’ve all been friends for a really long time,” he said. “We’ve played a lot with each other, and I think we’ve gained a lot of trust. And if we miss the shot, nobody is going to get mad at each other.”

That group of friends has created some incredible memories already this season, the type that get talked about in town for years. But they’re looking for more – the type of memories that get put up on banners.

“It’s been special, but we haven’t really accomplished anything yet,” Michael Ferland said. “It would make it way more special if we can win some accolades along with it.”