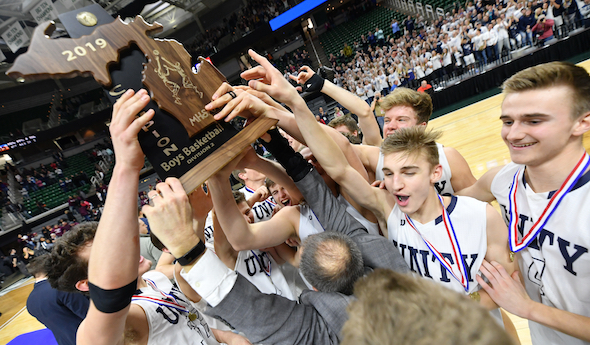 EAST LANSING – Noah Wiswary answered quickly when asked Saturday night if he had planned on winning multiple MHSAA championships during his senior season.

Wiswary – who also played on the Crusaders’ Division 5 champion football team – scored 17 points to lead Unity Christian to a 58-55 win against River Rouge in the Division 2 Boys Basketball Final.

He’s one of seven players on the Crusaders roster who played on an MHSAA championship team in the fall, as the Crusaders also won the Division 3 soccer title. So while Saturday’s win gave the Crusaders their first basketball title, being in championship games was nothing new to many of the players.

Unity Christian had to play hard from the beginning against a River Rouge program making its 20th Finals appearance – the most in MHSAA history – and seeking its first title since 1999.

“We do not turn the ball over, so I’m going to give River Rouge a lot of credit – we just don’t,” Unity Christian coach Scott Soodsma said. “We are averaging probably 10.5 to 12 all year long, and ball security is something we preach. But with the intensity of that game and the way they were coming at us, I give them a lot of credit. We did make a few mistakes that we probably typically don’t do.”

River Rouge had possession of the ball down just three with 12.4 seconds remaining. The Panthers were able to get two looks at a 3-pointer, but neither fell. Their final attempt to tie the game came on a ¾-court heave by senior Nigel Colvin, which was off the mark.

“I feel like (the first 3-point attempt) had a chance,” Colvin said. “But after I let it go, obviously I saw that it was off.”

River Rouge had trailed by as many as 13 points late in the third quarter, as Unity Christian started to heat up and looked to be putting the game away. Wiswary was big during the quarter, scoring 11 of his game-high 17 points. 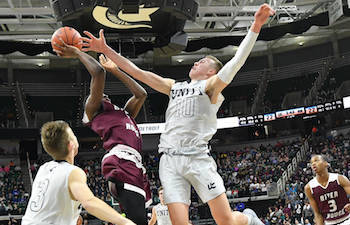 “I just think my teammates got me open,” Wiswary said. “I got in the lane a little bit, and they were open on the three and I just got a lot of floaters, then Ryan Takens hit a big 3 there, so that was big.”

River Rouge was able to claw back with its pressure defense, however, and force the dramatic ending sequence. It was too little, too late, however, in River Rouge coach LaMonta Stone’s eyes.

“Our defense creates our offense, and defensively we were bad the whole game,” Stone said. “They were getting too many easy looks. They were getting in the lane, and that’s just not the way we’ve been playing defensive basketball to this point.”

VanKoevering had 13 points for Unity Christian, while Takens had 10, and Zac Velthouse had eight points and eight rebounds. Among the Unity Christian starting five – which also includes Chandler Collins, who added seven points – only Velthouse returns.

“I couldn’t be prouder of these two guys,” Soodsma said, gesturing to Wiswary and VanKoevering. “They’ve been leaders all year long, on and off the floor. They’ve put in all kinds of work and effort, and those are the two guys we look to all the time. They have been a little bit special – it's going to be hard to say goodbye to them.”

River Rouge, meanwhile, started five seniors – Colvin, who led the team with 15 points, Micah Parrish who added 13, Donavan Freeman, Bralin Toney and Dan Few. The group helped bring River Rouge back near the top, as the Panthers had advanced to the Semifinals in 2017 and 2018. It was a great ride, but at River Rouge, championships are the goal.

“We’ve talked all week and talked all year, River Rouge basketball is based on state championships,” Stone said. “There’s banners in our gymnasium – there's 14 state championship banners. (Former coach Lofton Greene) has a number of runner-up places, but he didn’t place those banners in the gymnasium, so I’m not going to place it. That’s my mentor, that’s the guy I played for. Everything I know about basketball is based on Coach Greene. If he’s not satisfied with runner-ups, neither can I be.”