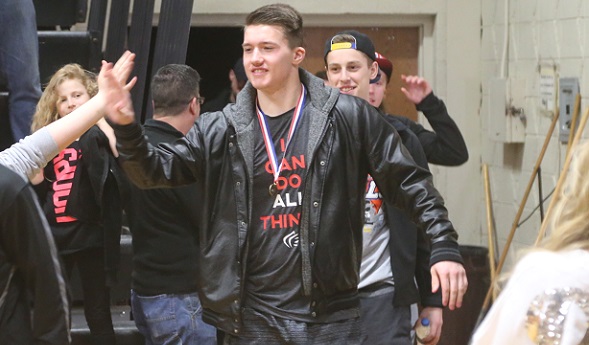 POWERS – Jason Whitens stands rather nonchalantly, but there is no doubt he is focused on his assignment.

It is not as easy to see his steely resolve in football because of the helmet and distance from which a fan watches Whitens prepare for the next play. It is much easier to see his features in basketball, where fans are almost as close to him as the defender.

In either sport, he scans the defense, then decides the best mode of attack. In both sports, he is efficient and effective, to such a degree that he has helped North Central win back-to-back MHSAA championships in 8-player football and Class D basketball.

The Jets brought a 55-game winning streak into the current basketball season, after extending their 8-player football mark to 26 straight wins. Whitens has been an integral part of each notable run.

He ran for an astounding 359 yards in the football finale as North Central throttled Deckerville 58-21. Deckerville had allowed only 50 points over its previous 12 games. Whitens also passed for 100 yards, but this game his running skills were needed as he averaged 20.7 yards per carry while scoring six touchdowns,

Last week Whitens entered basketball season with a school-record 1,410 points in three seasons, with an outside shot at reaching the year-old Upper Peninsula career mark of 2,178 points owned by Gage Kreski of St. Ignace.

Basically, the 6-foot-4, 210-pound senior is a threat to beat an opponent in a variety of different ways. That skill set has made Whitens an attractive college recruit in both sports, with interest from Division I and Division II schools such as the University of Wisconsin, Michigan State University, Central Michigan, Lake Superior State and Grand Valley State.

While all of those accolades are fantastic, Whitens remains a down-to-earth senior who has one primary goal as he approaches his final months in high school. Like his teammates, he wants to win another Class D basketball title.

And he spreads the credit around. “The surrounding cast has been phenomenal,” Whitens said, referring to teammates, family, friends and coaches.

“That has prepared me and my teammates for what we have done, how all of this has been given to us so we could perform. The best part of it has been all of us being together.” 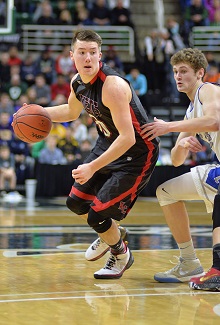 That togetherness began before this group of players was born. Gerald Whitens and Tim Bilski, dads to senior teammates Jason and Dawson, played on North Central’s 1984 Class D championship basketball team and were part of a 33-game winning streak that ended in the 1985 Semifinals.

“Sports bring people together; you make friends and create bonds,” said Jason Whitens. Noting what helps make it fun, he added, “We don’t talk about the game as much as we talk about the guys.”

Many of these Jets have been playing backyard games together since pre-school days, with only the rewards changing.

“When we were younger, we all dreamt of this and knew we could do it,” Whitens said in a recent interview at school. “That is why it is not a shock to do it. Now we are basking in it, we’re just going to enjoy it and say ‘that was fun.’”

He recalled traveling various distances to 3-on-3 tournaments as youngsters. “That is what separates us from other schools,” he said. “We’ve played together for so long we know where each other is and how each other plays.”

And did we mention their highly competitive spirit?

“We are always competing; there is no backing down from a challenge.”

North Central football coach Kevin Bellefeuil, who officiates basketball with Gerald Whitens, touched on that competitive level about his quarterback.

“The guy competes every time he is on the floor, on the field, on the diamond, every minute he is out there. If you want him to lie down, then take him out of the game,” Bellefeuil said.

“His dad is a pretty good competitor; his mom (Faye) is a competitor as well.”

His mother is a Granquist, and that family has been very athletically accomplished at North Central. Tom Granquist, Jason’s uncle, held the school basketball scoring record that Whitens broke last year. His cousin, Rob Granquist, was an all-star quarterback and cager just ahead of Whitens, and is No. 3 on the school’s basketball point chart.

“As a group, they all have a competitive spirit,” said Bellefeuil.

Jason Whitens, noting how it was important to keep up and surpass his relatives, said “there was always something to strive for, something you tried to do better. I was always motivated. I never just settled on doing something today or tomorrow.

“It is something I had to get intrigued about myself. It was second nature. I was always around it, I wanted to be a part of it. It just inspired me to be the best I could be,” Whitens said.

“Hopefully I can set an example and make (younger relatives) better than me. That would be selfish if I didn’t want that for my family.” 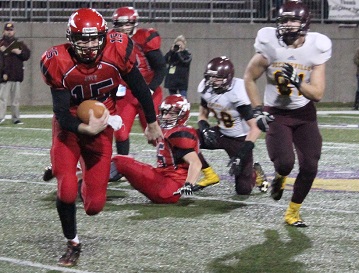 That competitive spirit and deep will to win may have reached a notable mark when Whitens was a freshman.

Playing in the basketball Class D Quarterfinal in Marquette, Whitens missed the front end of a 1-and-1 free throw set with no time left that sealed an 81-79 loss to Cedarville. That was the last time the Jets have lost on the hardwood.

A basket by Whitens at the buzzer was denied after the officials conferred and decided he had to shoot free throws.

“That was a huge impact as a basketball player and as a human being, as a person,” Whitens said in reflection. “I look at basketball in a whole new perspective now. It is not life or death. When I’m around family and friends, that is real.

“That (situation) helped set the bar. I didn’t want to feel or be put in a position where I would let my team down. I matured a lot from that point. I realized you can’t always play perfect. You are always going to make mistakes. That did inspire me to become better.”

The Jets have won 57 straight games since that loss. Surpassing the mark of 65 straight wins set by Chassell from 1956-58 “is in the back of our mind. It is a process, and we’re taking one game at a time. The most important thing is having fun and being prepared as the ride goes along,” Whitens said. “It is hard to do it yourself. It is great to do it together as one.”

Next up is Carney-Nadeau on Thursday, with Menominee providing a possible substantial challenge Monday.

He is also going through his senior season pondering his future in sports. “Where to go and what to play (football or basketball), that is mixed up right now. What (sport) to commit to and who to commit to. I’m not really close deciding where to go or what sport to play,” he said.

“It is a wild, crazy and confusing ride.”