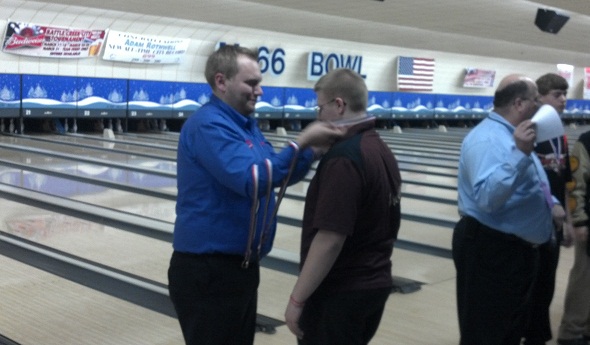 BATTLE CREEK – No one said becoming the first-ever two-time boys MHSAA Singles champ would be easy.

But after the winning the Division 1 title as a sophomore, Davison senior Taylor Greene took home top honors for the second time by defeating Lake Orion senior Kevin Yang on Saturday at M-66 Bowl in a match that came down to the last frame.

Greene almost didn’t have a chance to get that coveted second title after struggling in the first four games of qualifying. Standing 70 pins short of the cut line and in 40th place, he rolled games of 223 and 235 just to get into a roll-off for the 16th and final afternoon match play spot.

But Greene stayed hot, and a 256 roll-off score sent him to the match play and started a run to the championship match.

“The lanes kind of opened up, and I knew I had the shot to do it,” Greene said. “I was one of the few that were able to go that deep and turn it a lot.”

Greene opened the championship match with a 258, but Yang kept pace with a 229.  When Yang failed to double in the 10th frame of Game 2, the door was open for Greene – a mark and eight would seal the win.

“I knew I just needed a mark to beat him,” Greene said. “I was hoping it wasn’t a 10-pin because I missed one before that.”

In fact, it was a 10-pin. But this time, Greene promptly buried it and followed up with a strike to seal the historic championship, 438-435.

“Wow, it means a lot.  That’s crazy.  I never thought I would,” Greene said of adding his second title. “Last year, I had a good run at it. I dominated the field, but bowled bad after the re-oil.

"But this year, I’m glad I got to redeem myself.”

WATEFORD – Let Wyoming Rogers junior Derek Nyenhuis stand as the example for any bowler who squeaks into the final spot of match play at an MHSAA Final.

Nyenhuis made the Division 2 match play Saturday by a mere nine pins. But he proceeded to down the top seed by 18, his Quarterfinal opponent by 70 and eventually New Boston Huron’s Terry Bonner 426-340 in the Final.

"It feels awesome. I just worked hard through this whole thing,” Nyenhuis said.

“To tell you the truth, the seeding I don't think is a big deal. It just depends on how good the bowler is at the end."

He nearly fell into another slow start in the championship match before finding his shot.

"The first game I started off bad and made a ball adjustment and then threw seven in a row,” Nyenhuis said. “So I was up 60, but I just kept telling myself we were tied."

JACKSON – This already had been a memorable season for Grand Rapids West Catholic. But Trent Clark added a finishing stroke Saturday.

Clark pulled off arguably the gutsiest run of the Singles Finals, winning his first three matches by four, eight and 11 pins before downing Caro’s Jarred Pretzer 376-324 in the finale.

“This is the best group of kids you could ask for. Trent Clark did an amazing job this season,” West Catholic coach Mike Hall said. “He finished with a 220 average for the season and a high game of 289. He works every day on his game and strives to be the best.

WATERFORD – Sandusky senior Tyler Johnston qualified for the MHSAA Singles Finals all four of his high school seasons. One more day wasn't going to keep him from winning the Division 4 title.

Johnston also made the match play for the fourth time Sunday, and survived two and four-pin wins before defeating Rogers City's Zach Hazel 424-371 in the Final.

"The brown out yesterday was a very long day," said Sandusky coach and Tyler's dad Jeremy Johnston, noting the power outage at Sunnybrook Lanes that moved Division 4 competition back one day and to a different center. "I know all three of my boys that qualified for singles did not bowl well Friday and were happy to hear the tournament was moved, even though it was a long wait.

"We have only bowled at Century Lanes once, and didn't know what to expect. But it worked out well for Tyler."

PHOTO of Taylor Greene receiving his championship medal at the Division 1 Final. Click for detailed results from all MHSAA Singles Finals. 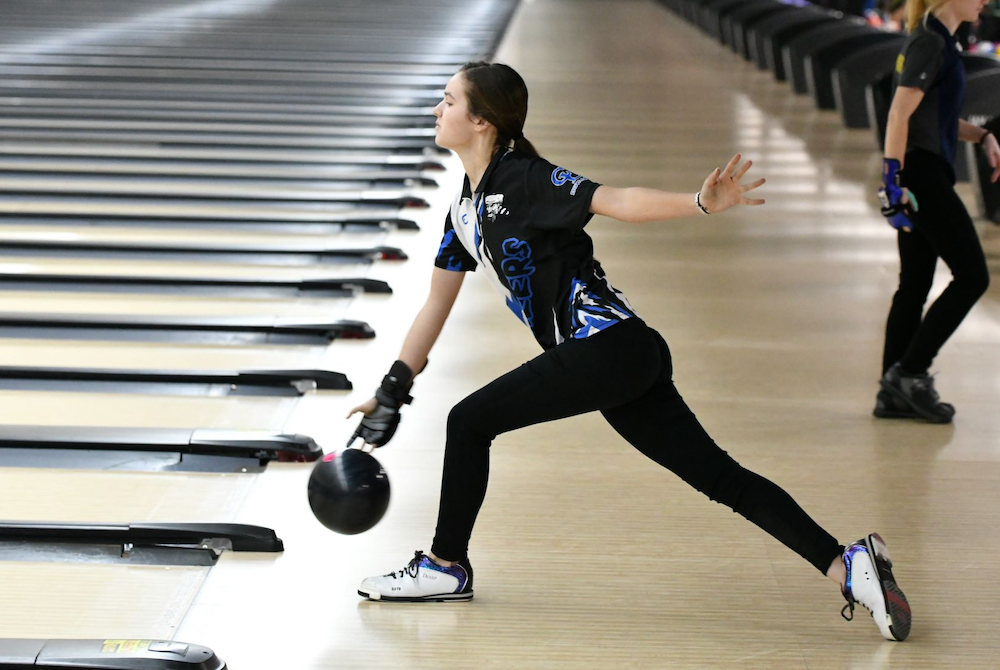 JACKSON — Slow and steady wins the race, the saying goes.

Croswell-Lexington’s Brooklyn Butler started her championship match with seven consecutive strikes, had a spare, and threw three more strikes to finish with a 279 en route to a 481-408 victory over 2021 champion Elizabeth Teuber of Flint Powers Catholic at Jax 60.

“This was my first time at states,” Butler said, “so I wasn’t sure of how it would turn out.”

At the suggestion of Pioneers coach Fred Kautz, Butler switched to a lighter ball during the semifinals.

“It felt comfortable,” she said.

It was the second time in as many weeks Butler and Teuber had met in a tournament final. They squared off in a Regional at Richmond on Feb. 26, with Teuber edging Butler by 14 pins to finish first.

But on Saturday, it was Butler’s day.

Teuber bowled well in defeat. Her 408 would have been enough to win in three of the previous five years.

A sophomore, Teuber said she would work on converting spares in preparation for next season.

For Butler, a senior, her first trip to the Finals was a bit of a whirlwind.

“I wasn’t sure how it was going to work out,” she said. “I was a little nervous going in, but that first game helped.” 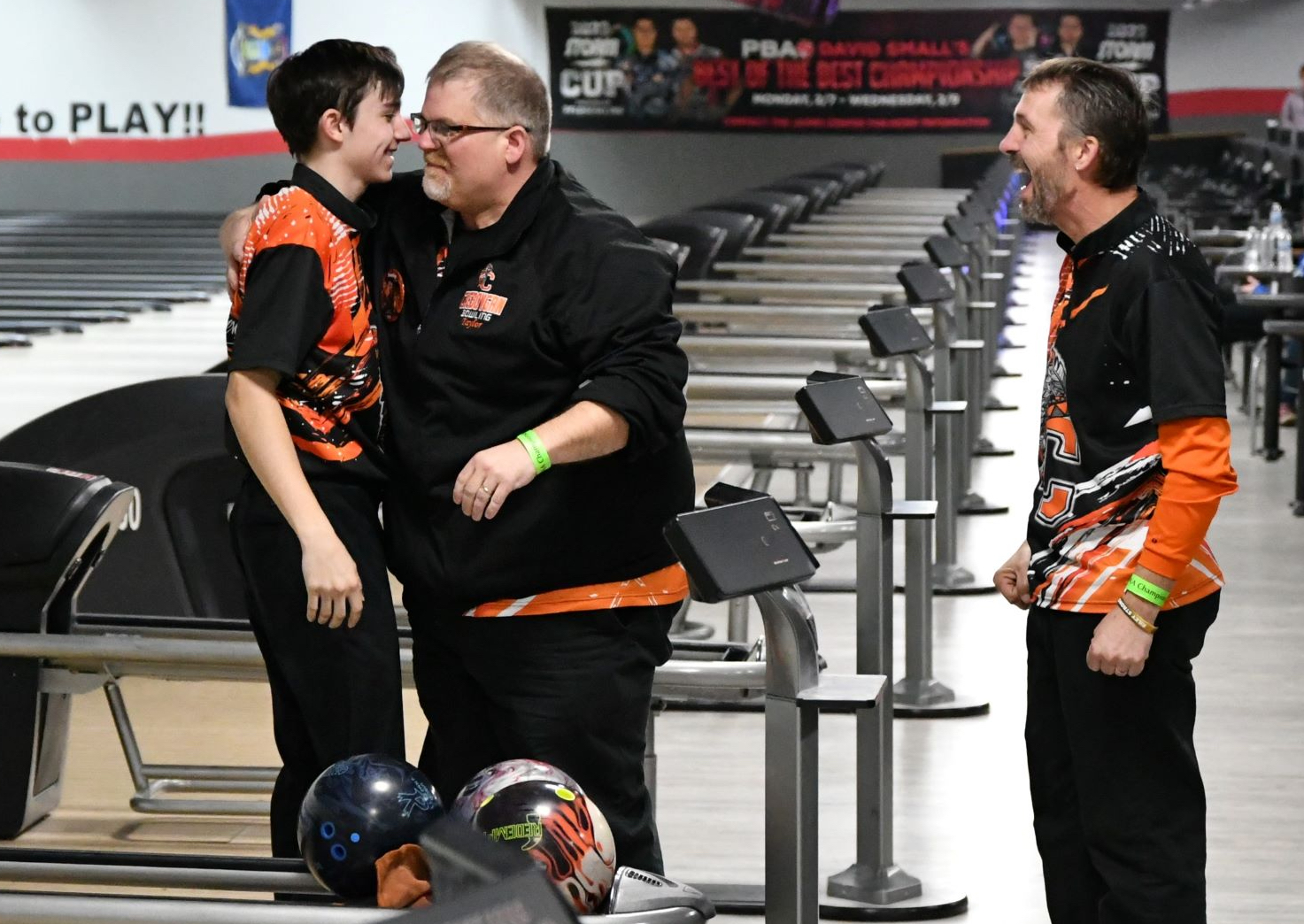 “She’s a level-headed lady,” Kautz said. “Does her job, is easy-going, and the mental game is there.”

You could say the same about Cheboygan’s Cole Swanberg, a junior who was making his third trip to the Finals and became the Chiefs’ second individual champion, after Dawson Campbell in 2019.

“I don’t smile when I’m bowling, because I’m focused, zoned in,” he said after defeating Tyler Downs of Ogemaw Heights 471-337.

His 259 in the first game allowed him to cruise to the victory.

“I was just planning on bowling the best I can do,” Swanberg said. “Don’t leave any open frames and hit my mark. I went 259. It gave me a 60-pin lead after the first game, and I could relax in the second.”

He admits his concentration does rattle some of his fans, including his mother.

“Oh, yeah,” he said, chuckling. “They tell me to try to smile at least part of the time.”

But it’s that focus that led to victory.

“He has good mechanics and good form,” Chiefs coach Brian Taylor said. “Nothing rattles him. It doesn’t matter if he throws a bad split or 4-5 strikes in a row. He’s the same way going into every frame. He takes his time, one frame at a time, and does his job. He doesn’t pay attention to anything else but what he needs to do, and that works for him.”

And the process worked Saturday.

“It feels awesome,” he said. “I’ve been working since my freshman year to do it, so it means a lot.’

Both Swanberg and Downs are juniors, meaning they could meet again next year.