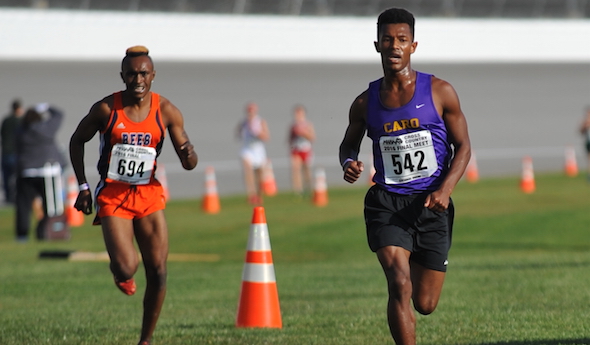 BROOKLYN – It was a race that took a toll on the front-runners.

Caro sophomore Yami Albrecht appeared just fine after winning the MHSAA Division 3 boys cross country championship Saturday, until a fellow competitor congratulated him with a hug. Albrecht staggered back a bit and closed his eyes, trying to get his bearings.

The runner he outkicked for the title, Bridgman senior Brian Njuguna, was helped through the finishing chute area at Michigan International Speedway by two runners from other teams.

Sure, the fast runners can sometimes make it look easy – but it isn’t, not with hopes and dreams on the line.

“It’s probably the toughest race I ran all year,” Albrecht said.  “In the race, I was hurting, but the person next to me was hurting just as bad. I had the advantage. I felt I was stronger. I was able to get it.”

“It was just like I imagined it,” Albrecht said. “The top four of us were the people I was thinking were going to be there.”

While the muddy conditions over the final 1,200 meters resulted in slower times for many of the top runners, the duel against Njuguna helped propel Albrecht to a personal-best time. His previous best was 15:49.1 in the Regional meet.

“Since then, I’ve been thinking about first place,” Albrecht said. “I was able to get that done. It feels good. I’m thankful for my coaches and my teammates.”

The three-way battle for first became a two-man duel as the finish line came into view. Njuguna took the lead as they hit the straightaway before Albrecht made a decisive move. 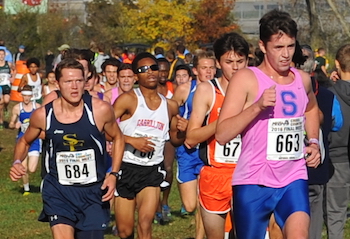 “Once we got on the straightaway, I felt pretty good,” Albrecht said. “I thought I had it. … I thought I could catch up to him. I was going to see what he was going to do and go off that once he got in front of me.”

Moving up to Division 3 didn’t impact Saugatuck, which won the team championship by a 61-137 margin over Lansing Catholic. Hanover-Horton was third with 182 points.

Saugatuck had always been a Division 4 school, winning MHSAA titles in that division in 2013 and 2015. This was the team’s fifth straight year in the top four of its Finals race.

The Indians had three runners across the line before Lansing Catholic’s top runner crossed.

PHOTOS: (Top) Caro’s Yami Albrecht (542) holds onto the lead ahead of Bridgman’s Brian Njuguna in the Division 3 Final. (Middle) Saugatuck’s Keegan Seifert (663) works to stay with a large pack in helping the Indians to the team title. (Click to see more from RunMichigan.com.)