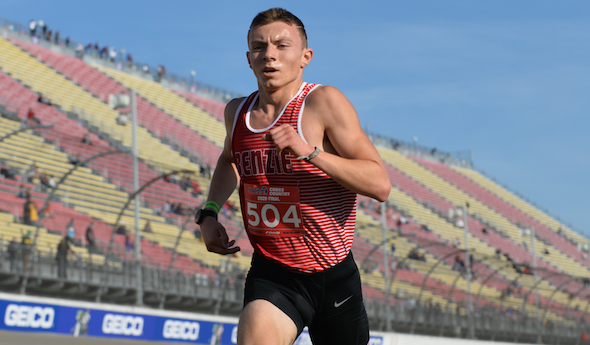 The sophomore successfully repeated as Division 3 individual champion, finishing the course at Michigan International Speedway in a time of 15:28.96. And part of the challenge was that he had to run by himself — nearly 30 seconds ahead of his next-nearest competitor and in the first of two races in his division. Due to COVID-19 safety measures, each division was separated into two races.

“He was chasing the times from yesterday,” said his coach, Asa Kelly, referring to a pair of sub-15 minute performances by Hartland’s Riley Hough and Ann Arbor Skyline’s Hobbs Kessler in the Division 1 Finals. “That’s definitely where he sees himself, running up there with guys like that. It’s so hard to go out there by yourself. It’s tough, but it is what it is, running in separate divisions like that.”

Jones said he had to change up his strategy a bit due to the unusual circumstances.

“I usually look at my times and gauge myself out on the course, but I really didn’t have that today,” said Jones, who beat his time on the same course from a year ago by 17 seconds. “I just have to remember to keep pushing through, and it worked out for me today. It felt great to get back here (and win), and I can’t wait for the next two years.”

Kelly sees the work Jones puts in each and every single day yet is still impressed every time his sophomore adds to his list of accomplishments.

“Back to back state champ and you’re only a sophomore, only the second kid that’s done that so far,” Kelly said. “He has a really high bar set for himself, and every single day he works his tail off to get to this race. He definitely deserves everything he gets out there.” 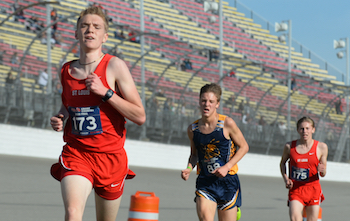 St. Louis captured the team title, finishing with a team score of 103 points to beat out Hart (116), the pre-race favorite. The Sharks had four runners finish among the top 23 overall, led by junior Aaron Bowerman, who crossed the line ninth in a time of 16:26.66. Also scoring for the team were senior Keegan Honig, junior Nate March, freshman Ben March and senior Joe Erickson.

“We knew there were five or six really good teams that could really make a run for it, and we wanted to put ourselves in a position to have that opportunity,” St. Louis coach Jay Puffpaff said after the race. “In a year like this, with all this adversity all around us, just being out here with an opportunity to bring home a state championship to our community, it means everything. The kids embraced that opportunity all year long and ran for each other the whole way.”

It was the first Finals championship for the Sharks since 2005, when they took home a Division 4 crown.

Senior Alex Enns paced Hart with his fourth-place finish. He crossed the line in a time of 16:21.59.

Traverse City St. Francis was third with 182 points, while Grandville Calvin Christian (186) and Hanover-Horton (205) rounded out the top five teams.