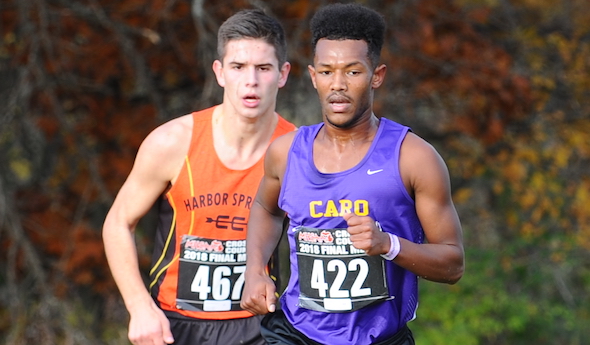 Albrecht won a kick to the finish with Jeremy Kloss of Harbor Springs for the second straight year to win his third MHSAA Lower Peninsula Division 3 individual championship with a time of 15:40.8 on Saturday at Michigan International Speedway.

Albrecht tied a record by becoming only the seventh boy in MHSAA history to post the fastest time in a Finals meet three times.

“It definitely is an accomplishment to have three state titles in a row,” Albrecht said. “I’m definitely going to remember that for the rest of my life, for sure.”

All three championships required a strong finishing kick to overcome a tough challenger.

Albrecht won by three seconds over Brian Njuguna of Bridgman in 2016 and by 2.4 seconds over Kloss last year. Kloss was side by side with Albrecht coming down to the finish before coming up 4.6 seconds short this time.

“We were coming into the stadium, we were next to each other the whole way around,” Albrecht said. “At the three-mile mark, Jeremy stepped in the mud and he got stuck. I saw his leg got stuck in there. I went for it at that point.”

Albrecht wasn’t at all disappointed to see somewhat muddy conditions when he arrived at MIS.

“Honestly, the last two years before this was all sloppy and muddy, so I was kind of happy that’s how it was today, so I could run the same way I did the past two years,” Albrecht said.

A new experience for Albrecht was having the opportunity to celebrate two championships at MIS. Caro finally completed its four-year march to the top of Division 3 by winning its first MHSAA team title since 1980 by a 61-100 margin over Pewamo-Westphalia.

PHOTO: Caro’s Yami Albrecht stays a step ahead of Harbor Springs’ Jeremy Kloss at the 2-mile mark of Saturday’s Division 3 Final. (Middle) Bryden Miller (426) leads another pack on the way to helping the Tigers to the team title. (Click for more from RunMichigan.com.)