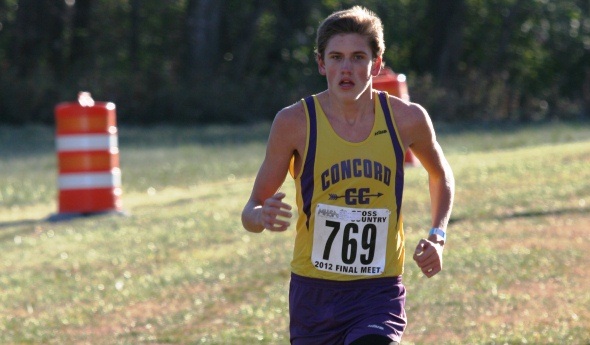 BROOKLYN — Jesse Hersha has already done something his running role models never accomplished, but that doesn’t lessen the sense of awe he has for past Concord state champions Kyle Stacks and Spencer Nousain.

Hersha became Concord’s third individual MHSAA champion in the last four years, but the first to do so as a sophomore, as he cruised alone up front to take the Lower Peninsula Division 4 championship Saturday at Michigan International Speedway with a personal-best time of 15:32.3. His performance led Concord to a second consecutive team title.

“I’m always fighting to beat Spencer’s times and Kyle’s times,” said Hersha, who was a teammate of Nousain’s on last season’s championship team. “Today I was three seconds or so off Kyle’s best time.

“They are definitely a push for me. They inspire me. Even if I beat their times, I’ll never think of myself as more than them. They’ll always be a role model to me.”

Hersha ran alone up front, winning by 20.5 seconds over David Zinger of Evart. Sean Kelly of Saugatuck was third in 15:58.9.

Hersha placed 19th at last year's Final, ninth among non-seniors. It was during the summer road race season that he began to get the confidence that he could become an MHSAA champion.

Nousain was the only senior in Concord’s Finals lineup last year, so the Yellow Jackets were favored to repeat. They did so handily by a 61-100 margin over Evart.