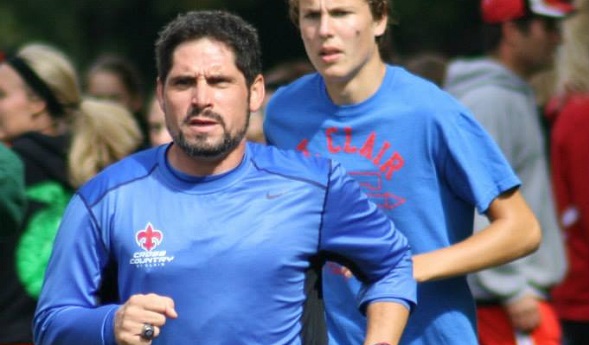 Jon Davidson may be retiring, but he isn’t slowing down.

That’s just not something the longtime St. Clair cross country and track coach does.

“Even when I go on vacation,” Davidson said. “If I’m not really, really sore at the end of it, it wasn’t a vacation.”

Davidson, 51, coached his last cross country meet this past Saturday when his Saints placed fourth at the MHSAA Lower Peninsula Division 2 Final at Michigan International Speedway. It ended his 20-year run leading the St. Clair boys program, which included Finals titles in 2012 and 2013, a runner-up finish in 2000, and 12 Regional titles.

He concluded his time as a teacher at St. Clair High School this past spring, and this upcoming track season will be his last.

While that’s a lot off his plate, Davidson will manage to keep his schedule full between the 11 rental homes he owns, his work remodeling homes, and following his youngest son, Ben, around the Midwest as he joins the Ferris State University basketball team in the 2018-19 season.

“If I wouldn’t have had six seniors this year, I probably would have retired from coaching (after 2016-17), too, but I told those guys I wouldn’t leave them,” Davidson said. “Actually, the plan was to retire from teaching and coaching this year, but they offered a buyout (for teachers). It was a lot of planning that all came together at the right time.

“I’m going to miss coaching a lot, but it was time. It had nothing to do with the kids. The kids are just as great as they were when I first started coaching in 1991 -- maybe better.”

Davidson – who began coaching at Clio in 1991 and spent three years at East Kentwood before moving to St. Clair in 1996 – took over the Saints cross country program in 1998. He coached both the girls and boys teams in 1998 and 1999, leading the girls to their first Finals appearance in program history before turning the reins over prior to the 2000 season.

With the boys, he turned a program that didn’t have enough runners to compete as a team in the Regional the year before he took over into one that was perennially among the state’s best.

While all of that success is a great source of pride for Davidson, it pales in comparison to his favorite part of the job.

“The thing that means the most to me is all the friends I made with my runners,” Davidson said. “There are guys who have graduated who are some of my best friends. Obviously winning the state championships were amazing memories, and going from not qualifying for state to taking second in 2000. But the best part of it is all the friends I still have that were my runners, and the opportunity to change kids’ lives.”

The feeling was mutual from his athletes. Davidson has been a member of the bridal party in weddings of his runners, and was recently the best man in the wedding of Addis Habtewold, who won an individual Finals championship under Davidson in 2007. 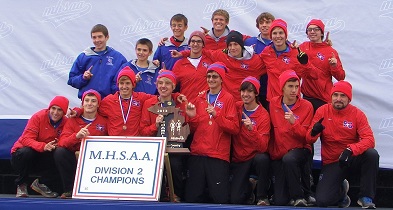 He often meets up with former runners, whether it be for a meal while they’re back in town, or taking trips with them to going skiing or hiking.

“Coach Davidson was the closest friend I had in high school,” said Brennan Shafer, the No. 1 runner on the 2012 Division 2 championship team. “He always knew what was best for me. He was always there when I needed him. He showed me what hard work and dedication was and where it could take me and our team.

“If it wasn’t for Coach, I would have never received a college scholarship, I wouldn’t have been included in our state championship team in 2012, and I wouldn’t be who I am today.”

To many outside the program, that may come as a surprise. Davidson could be seen at any meet constantly moving around a course barking out instructions to his runners. His workouts, which are a combination of systems used by legendary Finnish runner Paavo Nurmi and legendary distance coach Jack Daniels, are meant to be as tough as possible – “more mileage and running faster while running that mileage,” Davidson said.

So when a former runner of his met up with someone from a rival school at a party years later, “I heard you all hated (Davidson)” was the rival’s comment.

“He said, ‘Are you kidding me? He’s one of my best friends,’” Davidson recalled with a laugh.

The hard work equaled results, and not just with runners like Habtewold, who entered with a ton of physical talent. Davidson had a track record of taking runners who were struggling to break 19 or even 20 minutes when they first came to him, and turning them into scoring runners on Regional – or even state – championship teams.

“The thing I stressed the most was running hard,” Davidson said. “It’s a training sport. I prided myself on taking below-average kids and making them great. Lars McElroy, his PR as a freshman was 19:05. He ran a 15:54 by the time he was a senior.”

There’s a large list of those runners from St. Clair, and Davidson can rattle off all of their PRs without a second of hesitation.

“I love them,” Davidson said. “I love them all. You put that much work into something, and how can you not remember? It’s not just something I did for fun – I did do it for fun – but it was what I poured my life into.”

One of those runners was Trevor Holowaty, who started running for Davidson as a sophomore in 2011 and had a personal best of 19:02 that year. He was a scorer on both of St. Clair’s Division 2 championship teams, coming in 11th at the Final in 2013, and finished his high school career with a personal-best time of 15:47. Recently, while running for Ferris State University, he qualified for the NCAA Division II National Championships.

“Jon taught me what hard work truly meant,” Holowaty said. “He was an extremely passionate coach, very emotional and thoughtful when it came to interacting with his athletes. He always had a plan and a drive to see us succeed that convinced us to trust that plan, and it always came together.

“His excitement to see us succeed through effort and hard work transferred over into the classroom and daily lives of myself and many others for years to come. He created a relationship closer to a friendship rather than a job with his athletes. I cannot imagine being coached and mentored by anyone else growing up.”

Even with his retirement, Davidson’s impact is sure to live on through all those he’s encountered.

“I feel like I’ve made my mark on the world,” Davidson said. “I left a great legacy, and still will, because I’m friends with most of those people who ran for me. That’s my greatest accomplishment right there. That tells me I’ve done a good job, because they still want to see me.”