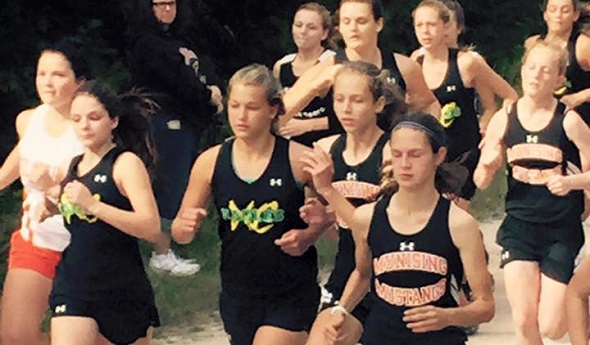 The year was 1987, when Deren Pershinski captured the Upper Peninsula Class D championship as the Eagles’ lone representative.

Things are different this year, as the Eagles have a full team for the first time in school history.

“Personally, I didn’t want to go out for cross country at first,” she said. “I had never been to a cross country meet in my life before this year. Some of my friends convinced me to come out, and this has been a good experience. The first practice was hard, but after that they got easier. There’s a lot of communication among us. We all get along.”

All of the team’s practices begin at 6:30 a.m. The school has 85 students, and some are pulling double duty to take part in cross country as well as another sport.

“My challenge is getting everybody to one spot at the same time,” said coach Tracy Germain. “We have volleyball and football players on the team. That’s why we run early in the morning. We want to avoid conflicts.”

"I am also the student service coordinator and believe strongly that students who are involved in something bigger than themselves fare better in school and in life," Engadine athletic director Deb DeWyse said. "Engadine is working to get as many students involved as we can responsibly and financially."

This was only the second cross country meet for the Eagles, who opened Sept. 2 in the Northwoods Invitational at Pickford.

Freshman Beth Haney placed sixth (25:59) despite feeling under the weather at the end of Wednesday’s race. 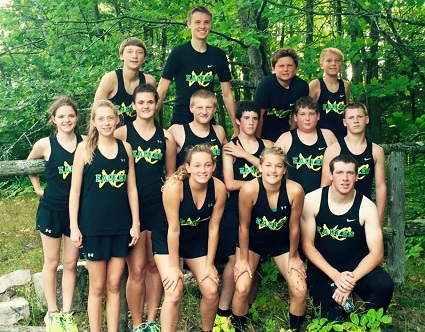 “I got lightheaded and it felt like I was going to pass out,” she said. “Except for that, the race went good. The course at Pickford is pretty hilly. Our first race was hard and challenging, but it probably helped me for today.”

“This has been hard, but it has also been a good experience,” Abby Germain said. “You want to push yourself to do your best. This meet was a lot easier because it was cooler over here. The breeze helped a lot. It was warm and humid at Pickford. I was nervous before the meet at Pickford because I didn’t know what to expect. It felt good to get the first one in.”

Junior Keegan Nance, who transferred from a small Christian school in Manistique last year, led the Engadine boys in ninth (21:43). The Eagles have nine boys on their roster.

“This is quite a learning experience,” he said. “We had one cross country meet a year at our Christian school, which hardly compares with this. There’s a lot of competition for us now, which is good. The practices were hard at first. Getting up early was probably the hardest part for me, but now I’m used to it.”

The Engadine boys finished fourth on Wednesday with 71 points. Rapid River won the meet on a sixth-runner tie-breaker.

“Many of these kids didn’t really know what cross country was before now,” said coach Germain. “Retired coach Jim Beck has been helping me. He comes to some of our practices and gives me advice when I need it. I couldn’t do this without him. I can’t say enough about the kids and their dedication and work ethic. These are brave kids. Our seniors Hannah French and Nick Price have shown great leadership.”

The Eagles resume Monday in the first leg of the Eastern U.P. Conference Jamboree at Pickford. The season concludes with the Upper Peninsula Finals on Oct. 24 at Gladstone.

PHOTOS: (Top) The Engadine girls, in jerseys with green and gold, run with a pack during the Northwoods Invitational at Pickford this season. (Middle) There are 14 runners representing the Eagles this fall, some who also play other fall sports.