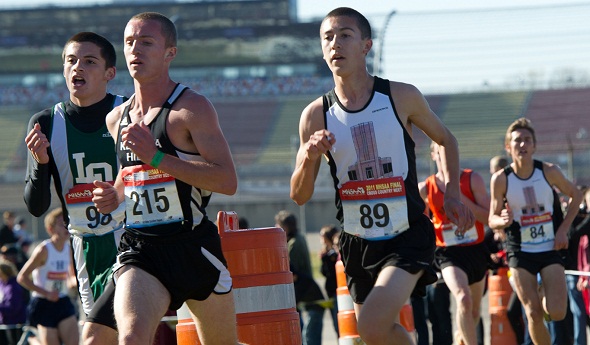 No MHSAA tournament event includes that many athletes from so many communities at one time and in one place. But while the girls races feature a number of standouts from last season, the boys packs will all have new leaders.

All four individuals champions from 2011 graduated. Two of last season's team champions are favored to win again, but not by as much. It's easy to expect some shake-up at the top of all four divisions.

Below are some of the teams and individuals expected to emerge. Click for Saturday's race schedule and links to all qualifiers.

Milford looks good for its second straight title and fourth over the last decade led by two top-five placers from last season’s Final – junior and reigning runner-up Brian Kettle and senior Cody Snavely, who finished fifth. Milford placed six of the top 10 at a Regional that also included No. 7 Hartland and honorable mention Pinckney. Romeo comes to MIS this weekend with its top four from last season’s 15th-place team; they finished third-sixth at their Regional. Three of Saline’s top seven from its 2011 fourth-place finisher are back, and posting five of the top 14 allowed it to win a Regional that also included No. 8 Ann Arbor Pioneer.

Individuals: Kettle finished only three seconds behind White Lake Lakeland’s Garret Zuk (now at Michigan State) last season, and Lake Orion senior T.J. Carey should be in the mix again after taking fourth at the 2011 Final and winning his Regional in 15:18. But watch out for Waterford Mott senior Nathan Burnand, the winner at this season’s MSU Spartan Invitational and the sixth-place finisher at the 2011 Final.

St. Clair took four of the top five and six of the top 10 spots at its Regional, led by winner and senior Brennan Shafer and freshman runner-up Buddy Brosky. They’re joined by three of the top five from last season’s seventh-place Final team. St. Joseph brings back four of its top six after finishing second at last season’s Final, and senior David Berry won his Regional as the Bears placed five among the top nine. Grand Rapids Christian took fifth last season with a senior-dominated group, but led by now-senior Wuoi Mach’s 14th-place finish. He paced five Eagles among the top 15 at their Regional. Reigning MHSAA champion Mason is ranked only No. 6, but returns fourth-place Tanner Hinkle, sixth-place Alex Whitmer and 25-place Mason VanDyke from last season’s title-winning team.

Individuals: After the top two, the next eight placers last season were juniors. Cedar Springs’ Connor Mora took third, and after two MHSAA track championships in the spring looks like the favorite to add one in cross country after winning his Regional in 14:54. But Big Rapids senior Clark Ruiz was runner-up in that Regional at 15:16.5, and Hinkle won his Regional in 15:30.9.

Marlette finished 11th last season without a senior, and four of the top six from that race are back this weekend, led by senior and seventh-place finisher Jacob Bowman. Grandville Calvin Christian won its second-straight Final last season by placing four among the top 10, and only fifth-place Zac Nowicki is back from that group – although total, Calvin Christian has four of its top seven from that team returning, and the team took seven of the top 21 spots in dominating its Regional. Benzie Central, the 2009 champion, finished fourth last season with two seniors at the top but returns the next three from last season’s top five.

Concord won last season’s championship on the shoulders of individual champ Spencer Nousain, but he was the lone senior and four of that top seven lead this top-ranked team. The Yellow Jackets took five of the top 10 at a Regional that also included No. 10 Mendon. Pewamo-Westphalia finished eighth in Division 3 last season and brings the top six from that team into Division 4 this weekend after claiming six of the top 19 spots at a Regional that included No. 4 Breckenridge and No. 8 Mount Pleasant Sacred Heart. Saugatuck’s 11th-place finish last season came without a senior, and four of the top six are back led by last season’s individual runner-up, now-senior Sean Kelly.

PHOTO: Lake Orion's T.J. Carey (98), Grand Rapids Kenowa Hills' Jeff Bajema (215) and Milford's Cody Snavely (89) run near the front during last season's Division 1 Final at Michigan International Speedway. All three finished among the top eight and will be back this weekend. (Click to see more from HighSchoolSportsScene.com)