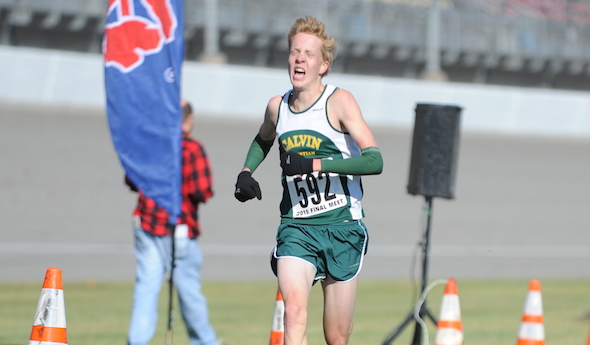 BROOKLYN — It would've made things easier for Abe Visser had James McCann not improved so much this year.

But Visser isn't interested in taking the easy path to success.

Visser, a senior at Grandville Calvin Christian, became the school's first MHSAA cross country champion by posting a time of 15:34.8 on Saturday in the Lower Peninsula Division 3 Final at Michigan International Speedway.

He won a duel with McCann, a senior at Holland Black River, who took second in 15:48.4. The two battled it out until Visser pulled away late in the race.

"I raced McCann four times this season," said Visser, who won all four matchups. "Each time, he's given me quite a run. He really came out of nowhere this year. It was unexpected, but I'm glad he made that jump, because it pushes me. It helps me run well."

Visser also lamented the absence of Zac Wright-Fisher of Scottville Mason County Central. Wright-Fisher is a three-time all-stater who was second last year, but an uncharacteristic third in the Regional last Saturday in 16:33.27.

"My main competitor, who would've been here this year, I think is injured," Visser said. "That's not good. That would've been fun to race him really hard."

Winning the title is the culmination of a dream Visser didn't believe was possible when he finished 51st as a freshman. 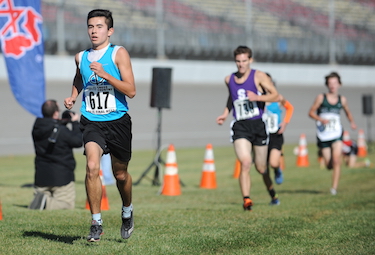 "A couple years ago, I never thought this would happen," he said. "But after last year at state, I realized I might be able to do it. You never expect to win state, at least not that young. That's just insane."

Despite lacking the star power of its most recent teams, Lansing Catholic won an MHSAA championship for the first time in 13 trips to the Finals, edging two-time defending champion Benzie Central by a 124-127 score. Holland Black River was third with 149 points.

Lansing Catholic had individual champions in Zachary Zingsheim (2011) and Keenan Rebera (2013 and 2014) in recent years, finishing second twice and third once in the last five seasons. The Cougars finally got to the top, despite not having a runner finish among the top 19.

Benzie Central was trying to match the three-peat of its teams from 1984-86. The Huskies have eight MHSAA championships.