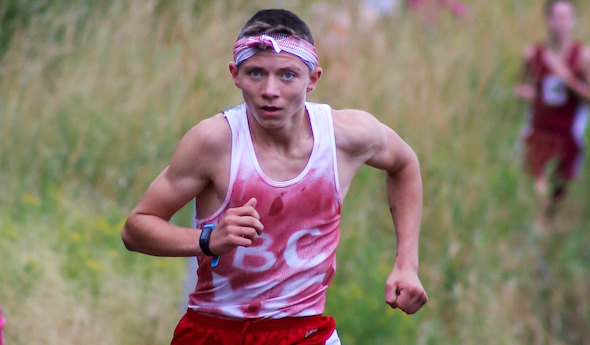 BENZONIA — At Benzie Central, the emphasis in the boys cross country program is placed upon team goals and toward achieving success as a group.

However, it’s been hard not to notice the Huskies have their next great runner coming through the system.

Freshman Hunter Jones has burst onto the scene like a comet for Benzie, leading the Huskies with first-place overall finishes in all but one meet this season and recording the fastest 5K time nationally for a freshman along the way.

“Any challenge we throw his way he rises up, whether it’s a workout or a race — anything,” said veteran Benzie Central head coach Asa Kelly. “He always wants to exceed whatever we put out there. He’s a rare individual. An exceptional talent but it’s not even the talent. It’s just his drive. His desire to win. His desire to continue and improve is just pretty amazing.”

The desire and the drive stem from Jones’ love for winning, which is much greater than any passion he holds for running. He’s done plenty of winning, too, coming in first in 11 of the 12 races he’s run this fall.

“Running is not the greatest, but when you win it’s all worth it in the end,” said Jones. “I just say, ‘Well, the harder you run, the sooner you can be done.’”

Running is a tradition for Jones and his siblings. His brother Rick was on the Huskies’ 2009 Lower Peninsula Division 3 champions. His sister, Sarah, ran for the Benzie Central girls program. As a 6-year-old, Hunter watched his brother and his Benzie Central teammates celebrate the sixth of the boys program’s eight MHSAA Finals titles. Not long after he got started running with the elementary school squad.

“I was pretty successful,” Jones says, while foreshadowing what was to come.

Jones left Benzie Central in sixth grade and spent nearly two years in Buckley before transferring back to Benzie Central so he would have access to taking more honors classes in high school. Last spring, he generated some buzz when he ran the fastest middle school time in state history in the 1,600 meters (4:32) and the 3,200 meters (9:34). The mile record snapped a mark that was set 47 years before by Paul Singer of Saginaw St. Thomas, while Jones smashed by 17 seconds the 2-mile record set in 2011 by Ben Hill of Royal Oak.

“That was when we were like, ‘This is kind of an unreal level that this kid could be,’” said Kelly, who knew Jones as an elementary schooler, coached both his brother and sister in high school and began mentoring Hunter during track season last year.

Kelly noticed immediately how receptive Jones was to coaching, and the Huskies’ head coach also noted how well Jones implemented what coaches were asking him to do.

“It’s rare if I have any kid, even a polished senior athlete, where I can say, ‘This is exactly what I want you to do in this race,’ and they do it perfected,” said Kelly. “This kid was doing it in eighth grade. I would say, ‘These are the splits that I want you to hit at this point of the race, and I want you to surge at this point,’ and he could do it to a ‘T’. I’m like, ‘Wow, this kid is pretty special.’”

By that point Kelly knew Jones would be the Huskies’ top runner in the fall. But he also had a fairly veteran group returning. Four of the Huskies’ top seven were back from a squad that finished 15th last year in LPD3. To help with the transition into this season Kelly had former Benzie Central standout Brayden Huddleston, a sophomore running for Bradley University, come and talk to the team’s captains about how to handle having an impact freshman runner. Huddleston was speaking from experience, having been in Jones’ shoes as the Huskies’ No. 1 runner his freshman season.

“Brayden came and talked to those guys and said, ‘Hey, those guys took me in with open arms, and I beat seniors who were returning all-state.’ They thought it was the greatest thing ever,” said Kelly. “It was pretty awesome we could use an alumnus and say, ‘This has been done before and it worked really, really well if it’s done the right way.’ It’s really about how the upperclassmen handle it, and they’ve embraced (Hunter) really well.”

Kelly said Jones’ abilities have not only helped the Huskies in races, but also improved the level of intensity of practices. He said that was a needed jolt for a program that two years ago failed to qualify for the Finals for the first time in 24 years, snapping a string of top-10 state team finishes that also reached 24 years. The Huskies returned to the Lower Peninsula Finals last year but ran out of steam as the season came to a close.

“Practice as a whole has seemed to ratchet up a bit because (Hunter) doesn’t really back down,” said Kelly. “He runs hard. In the past few years I felt like it was pretty relaxed, like ‘OK, we’re going to go easy today.’ All of the sudden now you’ve got this kid who’s not going really easy and other guys are going, ‘Well, I’m going to go with him.’ I think we needed that mentality shake up. It was kind of one of those blessings to have this kid come in that just pushes all the time. His mentality is win. All the time it’s win. That’s what they needed. It was a great thing to have him come along.”

Jones enjoys the focus the Huskies place on their team, where even the star runner has an opportunity to blend in as much as possible.

Jones has seen dramatic improvement through the fall. At each of his last three meets he clocked under 16 minutes. Included in that was the performance at the Shepherd Invitational on Sept. 28 where Jones ran a 15:38 — the best time any freshman had posted in the nation. One meet later, at the third Northwest Conference jamboree, Jones bettered that with a time of 15:25.

“It was a good feeling,” Jones said, recalling the meet in Shepherd. “I was just so tired. It was hard. I just dropped and put my hands over my head.”

The lineage of elite runners who have come out of Benzie Central is impressive. Jake Flynn was a three-time individual Finals champion from 1997-99 and a Foot Locker All-American. The trio of Bill Huddleston (Brayden’s dad), Matt Johnson and Todd Kulawiak helped Benzie Central win three consecutive Class C championships from 1984-86. Each of those runners remains close to the Benzie Central program, and the consensus is that Jones could be just as esteemed when his career is over.

“They’re kind of shaking their heads when they see this kid,” said Kelly. “They also see what he’s got. He’s got that difference-maker that’s really hard to describe in an athlete. That next-level type of thing. His mental toughness is just off the charts. To say, ‘I race to win every single time.’ Most kids don’t think that way at all. It’s, ‘Well, I just want to run fast.’ He’s not thinking that way at all. It’s, ‘I’m going to run as hard as I can and win. Whatever it takes.’ That’s just a different mentality.”

It’s that mentality that Jones is hoping can help him achieve some of his goals. He is taking aim at Flynn’s school record of 15:12 and would like to be only the second four-time individual Finals champion in state history — Central Lake’s Ryan Shay won four straight from 1993-96. The state record time of 14:10, set by Rockford’s Dathan Ritzenhein at the 2000 Lower Peninsula Division 1 Final, also is an objective.

“The sky’s the limit,” said Kelly.

PHOTO: Benzie Central freshman Hunter Jones breaks away on the way to winning the Charlevoix Classic by 32 seconds on Sept. 7. (Photo by Sports in Motion.)