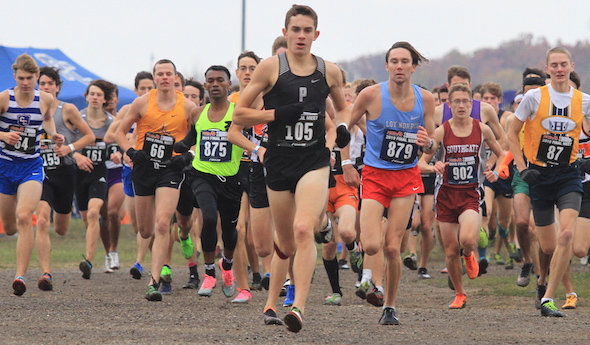 BROOKLYN – Carter Solomon could finally relax, a luxury he couldn’t afford himself for almost 3.1 miles.

The Plymouth senior had the fastest time in the state this fall and was fourth in the Foot Locker National Cross Country Championship last year, accomplishments that didn’t intimidate the other two runners who clung to Solomon in pursuit of the same dream.

When Solomon had finally shaken his rivals and was in the clear, he thrust his arms in the air in a display of emotion he rarely showed while winning races all season.

He had finally checked off the final box on one of the best high school cross country careers in Michigan history.

Solomon won the MHSAA Lower Peninsula Division 1 individual championship at Michigan International Speedway with a time of 15:01.2, the fastest time in any division Saturday.

In his career, Solomon won a team championship with Plymouth last year, made All-America at Foot Locker and put himself in select company by earning all-state for the fourth time Saturday.

Solomon placed in the top 18 all four years. The only boy to accomplish that feat in the MHSAA’s largest classification since separate team and individual races were discontinued in 1996 was Rockford legend Dathan Ritzenhein, who made the top five four years in a row from 1997-2000. 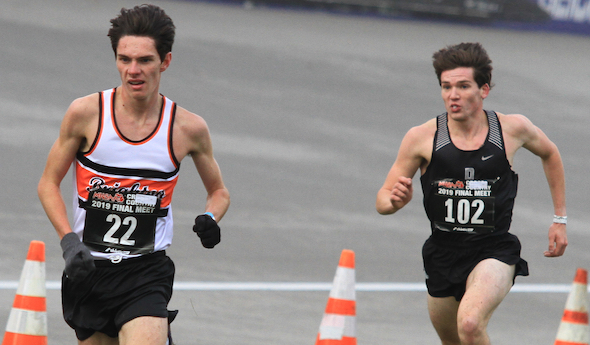 Running stride for stride with Solomon for much of the race were Clarkston senior Brendan Favazza and Brighton senior Jack Spamer. Favazza finished second in 15:06.0, and Spamer was third in 15:17.1.

“It helps when you’re best friends with him,” Favazza said of Solomon. “He pulled up right beside me when I took the lead and he said, ‘Let’s go one and two together; this is it.’ I’m like, ‘This is the guy. I’m sticking with him the whole way.’”

While Spamer was third in the battle for the individual championship, he got the prize that Solomon and his teammates won last year.

With Spamer in third and Stewart in fourth in 15:30.7, Brighton won its first MHSAA championship since 1995 and third overall by a 136-154 margin over Dexter.

It was the fourth MHSAA Final meet for Stewart and Spaanstra and the third for Spamer, but the other four Brighton runners were competing at MIS for the first time.

“We didn’t need to run any A-plus races,” Stewart said. “We just needed to have an average day. We came out and did that.”

PHOTOS: (Top) Plymouth’s Carter Solomon (105) pulls to the front of the pack near the start of the Division 1 Final on Saturday. (Middle) Brighton’s Zach Stewart stays a few paces ahead of Plymouth’s Patrick Byrnes as the two went on to finish fourth and fifth, respectively. (Photos by Matt Yacoub/RunMichigan.com.)