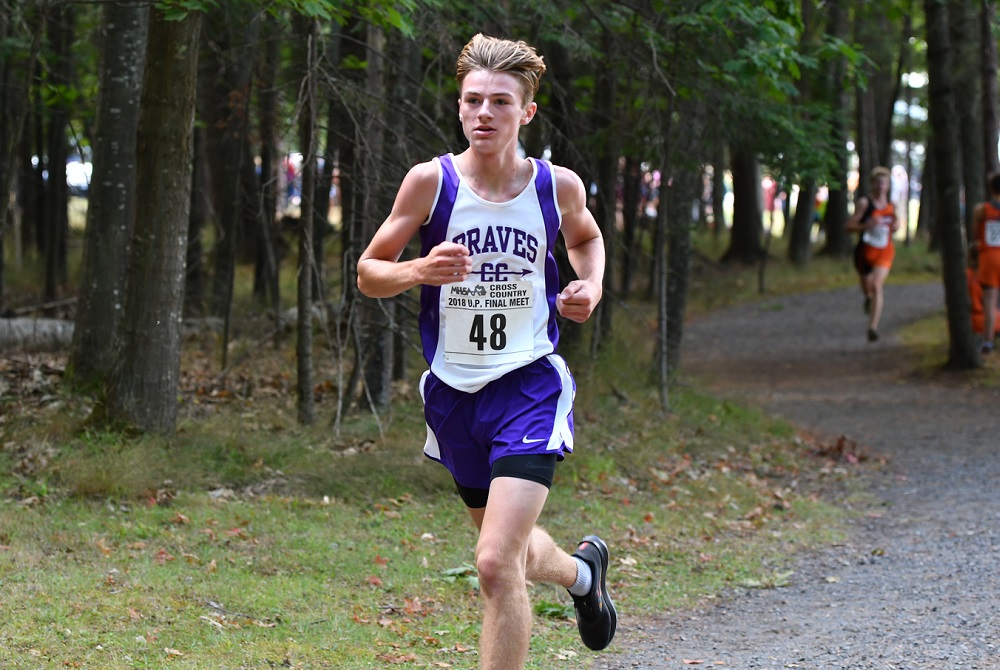 GLADSTONE — Drew Hughes has been piling up victories throughout this cross country season.

The Gladstone High School junior won for the ninth time in as many races Tuesday, finishing first at the Gladstone Invitational at Richer's farmhouse.

That victory came three days after earning top honors at the Sault Ste. Marie Elks Invitational by covering the 3.1-mile course in 16 minutes, 35 seconds. At Munising on Sept. 28, he ran a personal-best 16:22.4 in the El Harger Memorial Invitational at Pictured Rocks Golf & Country Club, shaving seven seconds off his previous best at the Holly Invitational on Sept. 18 at Davisburg.

What has made him so successful?

“It’s probably the training I did this summer,” said Hughes, who averages 20 miles a week. “I ran with a lot of my friends, and they pushed me a lot. Although, most days I was running by myself. After a meet when I get a good time, I just want to keep getting better.”

Hughes has finished under 17 minutes in his last five races, including the John Prokos Memorial Invitational in Escanaba where he was clocked at 16:47 on Sept. 25. He also ran a 16:47 on Tuesday.

After the Holly Invite, he was selected the Athlete of the Meet for Division 3-4-5 after becoming the first male runner from the Upper Peninsula to take top individual honors in the meet’s 53-year history.

“I thought that was real cool,” said Hughes, who ran a 5:10 split in his first mile. “After the first mile, I wanted to keep that pace. I also wanted to make sure I didn’t burn out. I slowed down slightly in the second mile, but not too much. Coach (Gary Whitmer) told me my two-mile split. At that point, I wanted to go for under 17.”

Gladstone placed third at Sault Ste. Marie with 84 points. South Lyon won at 27, followed by the host Blue Devils with 51.

“My teammates and coaches have been very helpful, and they’ve been helpful and respectful to other teams,” said Hughes. “We’re a real good small team.”

On race day, he enjoys the competition and camaraderie with other runners.

“I just loved running,” he said. “My brother Luke was among the best runners in middle school, and that really motivated me. He had a lot of speed and height. In second grade, I started getting interested in running by watching him. They had a lot of people there. That was awesome.

“Our coach would treat us to ice cream after some practices. He and my grandfather came with us and rode their bikes while we were running.”

Hughes hopes to retain his Great Northern Conference title at Menominee on Oct. 14 and Mid-Peninsula Conference crown in Ishpeming on Oct. 18.

The season ends with the Upper Peninsula Finals on Oct. 23 at Gentz Golf Course in Chocolay Township (near Marquette). Hughes finished 12th in the Division 1 race in 2020.