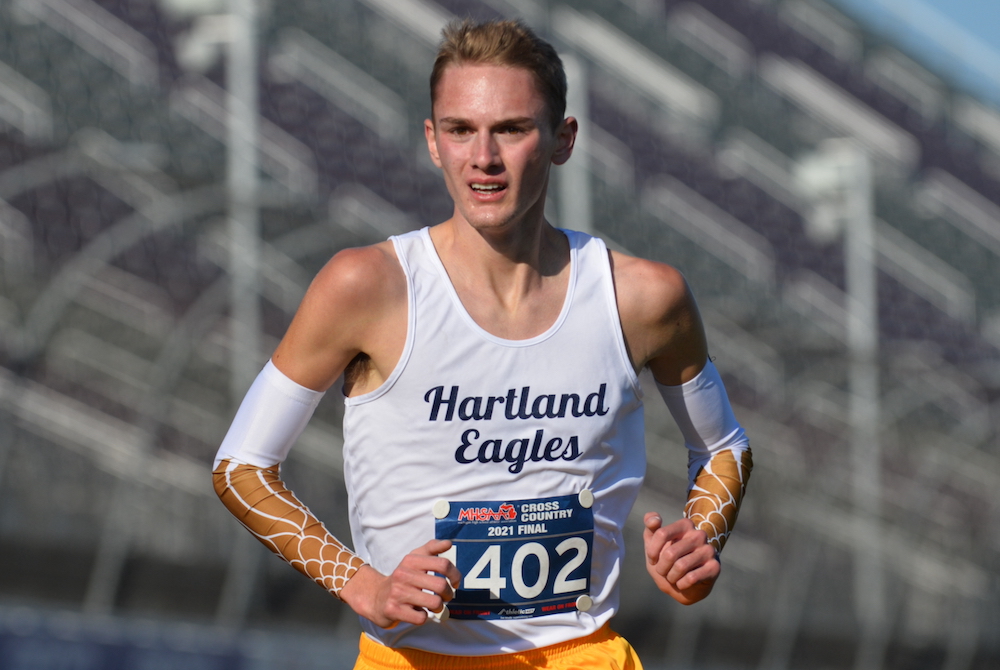 BROOKLYN — Riley Hough of Hartland is flattered whenever his name is mentioned in the same breath as Dathan Ritzenhein’s.

Few runners who have come along in the last 21 years inspired any comparisons to the former Rockford great, whose time of 14:10.4 in the 2000 MHSAA Lower Peninsula Division 1 meet is the fastest high school performance in history.

After breaking Ritzenhein’s course record at the Portage Invitational with a time of 14:37.1 on Oct. 9, Hough did something the three-time Olympian never accomplished at MIS by breaking 15 minutes for the second time.

Six other runners have gone under 15 minutes at MIS, but none more than once. Ritzenhein came the closest before Hough, winning the 1999 Class A meet in 15:05.4 before his awe-inspiring effort as a senior.

As far as Hough is concerned, he wants to leave his own legacy apart from anyone who came before him.

“Obviously, I have some of his records in some of the other invitationals,” Hough said. “Honestly, I feel I’m just making a name for myself instead of just trying to replace someone else.”

Hough finished the season 13-0, winning his last 24 races in a Hartland uniform. 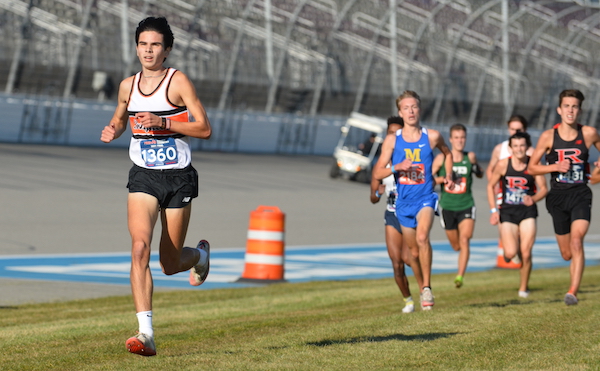 Farmington’s Peter Baracco, like Hough a four-time all-stater, was less than a second off the pace at the mile mark, which Hough reached in 4:50.9. With a 4:44.3 second mile, Hough obliterated the field by opening up a 27.5-second lead.

Hough’s possible successor, Grand Haven sophomore Seth Norder, moved from 10th place at the two-mile mark to second by the end of the race. Norder crossed the line in 15:25.69.

Winning the team championship for the second time in three years was Brighton, which outscored runner-up Caledonia, 141-175.

The Bulldogs have five different scoring runners from their 2019 team, with only one runner back from the seven who took the course two years ago.

PHOTOS (Top) Hartland’s Riley Hough closes in on a repeat Division 1 championship Saturday. (Middle) Brighton’s Quinn Cullen leads a pack toward the finish while setting the pace for the eventual team title winner. (Click for more from RunMichigan.com.)