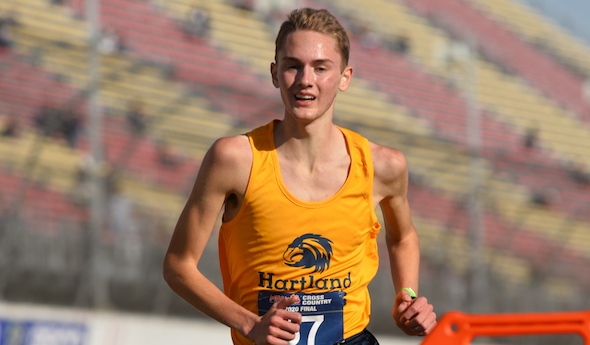 BROOKLYN — Junior Riley Hough of Hartland and senior Hobbs Kessler of Ann Arbor Skyline would have preferred settling it head-to-head, not in a glorified time trial.

But both also understood the unique circumstances presented by the COVID-19 pandemic and appreciated any opportunity to compete in an MHSAA cross country championship.

Kessler ran the third-fastest time in the 25-year history of cross country Finals at Michigan International Speedway in the first of two Division 1 boys heats, only to be edged by a slightly greater performance by Hough in the second heat Friday morning.

Hough started and finished strong, overcoming Kessler’s faster third mile, to win the championship with a time of 14 minutes, 49.62 seconds. It was a the second-fastest time in MIS history, trailing only the legendary 14:10.4 performance by three-time Olympian Dathan Ritzenhein of Rockford in 2000.

“I’m proud, because that was 100 percent of what I could give, but I can’t control anything he does,” Kessler said before Hough took the course. “I’m inclined to think he’s going to do great. He’s super talented and tough.

“It’s not the way I would’ve liked it, but I can’t complain too much. I did not think there was going to be a state meet. It was more of a gift. You can complain about the format, but it still resembles a state meet pretty similarly. It’s a blessing we got something in.”

Hough and Kessler met during a dual meet Aug. 25, with Kessler pulling away in the final half mile for the victory.

Hough’s coaches let him know the time he had to beat while he was completing his warmup. 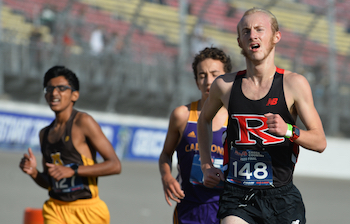 “That’s definitely weird having the state meet sound like a time trial,” said Hough, who was 27th as a freshman and seventh as a sophomore.

Hough’s coach, Matt Gutteridge, believes his runner can go down as one of the all-time best in a state that has produced great cross country talent.

“The sky is absolutely the limit,” Gutteridge said. “If he works hard and does all the right things and listens to myself and his dad, he can do whatever he wants.

“The thing that always comes back to MIS is what does the course look like? Hopefully he’s strong enough to run through any of the conditions that are out there. This is the girls’ side, but I remember Megan Goethals (of Rochester) running extraordinary on a really bad day. I think that’s something Riley’s going to be able to do next year. It doesn’t matter what the weather’s going to be, he’s strong enough to run away with it hopefully.”

Hough focused on the clock as he sprinted toward the finish line.

“That last straightaway, my coaches were yelling at me to go,” Hough said. “I was telling me to go. I was basically dead, but I knew I had to push it beyond my limit. It worked out in the long run.”

Romeo, ranked No. 1 all season, backed it up on the course by winning the team championship with 124 points. Caledonia was second with 156.

PHOTOS: (Top) Hartland’s Riley Hough charges toward the finish at MIS on Friday on the way to the second-fastest time of an MHSAA Finals at the track. (Middle) Romeo’s Jack Wallace (148) leads another group down the stretch in helping his team to the championship. (Click for more from RunMichigan.com.)